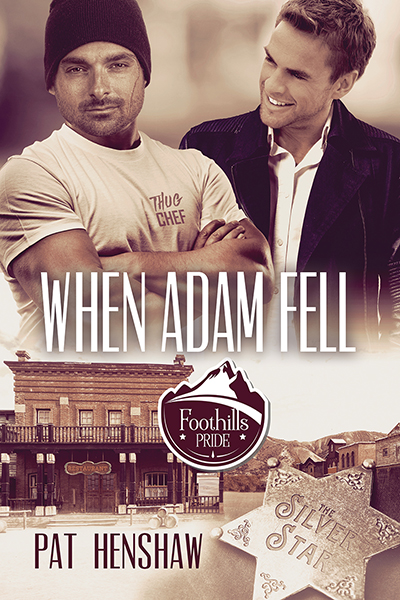 Blurb:
When his lover Jason’s drug addiction spiraled out of control, TV celebrity chef and cookbook author Adam de Leon walked away from him. Adam also abandoned his renowned restaurant in San Francisco to start a small bistro in the Sierra Foothills.
Five years later Adam is battling the conservative leaders of Stone Acres, California, to open a new restaurant in historic Old Town when Jason turns up on his doorstep—a recovered Jason, now going by the name David and claiming he’s overcome his addictions. What’s more, he begs Adam to take him back and says he’s ready for their happily ever after.
Adam has enough on his plate with problems plaguing the opening of his restaurant. And now he’s having a hard time deciding which to follow—his head or his heart.

Excerpt
I watched Jason rise from the stoop.

He looked good. His golden hair sparkled in the day’s first light. A happy smile tinged with nervousness spread across his lips. He was wearing a silver-gray Bogner jacket, some sort of expensive pants, and sturdy boots. Hanging from his shirt collar, his sunglasses looked like those high-priced titanium ones. All in all, the guy standing in front of me could easily have fit into the young, hip app crowd now flooding the valley. Too much money and no idea where to spend it. He looked like a guy who’d eat at the Bistro and then f*cking strut up to me after dinner, put a wad of Franklins in my pocket, and whisper, “Quit this job and come cook for me.”

Nothing tempted me, especially not the hundred-dollar bills I’d thought were Monopoly money the first time I’d seen them. Nothing had moved me like this, seeing Jason rise straight up in front of me like a f*cking miracle.

Standing there in my scuffed clogs, beat-up jeans, and ratty Stanford Cardinal T-shirt, I felt underdressed for this particular dream. Shouldn’t I at least be wearing my chef’s regalia, toque and all? Shouldn’t I have a Henckel in one hand and a Wüsthof in the other? Or maybe clutching a shield made of my cooking classics, which I’d written with an angry, tormented mind but a clear eye to royalties?

“Cat got your tongue?” the vision asked.

“Sorta. Who else would come knocking at your door looking like me?” He flung his arms out like he wanted me to hug him or some sh*t.

I backed away and kept my hands to myself, though my dick perked up immediately. Did Jason have a twin or a younger brother, somebody who resembled him? I didn’t think so. All I’d thought for five years was nobody—and I mean nobody—could ever have come back from where my Jason had buried himself. At least I never thought so.

There’ve been moments in my life when I was sure I was losing my mind. When I knew whatever tenuous grasp on reality I thought I had was really smoke up my ass. This moment smacked of those. As the legendary John Fogerty sang and the great Yogi Berra is supposed to have said, it was like déjà vu all over again. Only not.

“What the hell are you doing here?” I asked. Suspicion tasted bitter on my tongue.

Slowly his arms came down, and he gave me a pained but understanding look.

“Yeah, well, it was too much to hope we’d just kiss and make up.” His husky croak had once made me roll over and do anything he asked, but not now. “Can I come in? It’s a little chilly out here.”

I wasn’t cold, but then I’m tall and stout, a real cliché chef image. F*ck, I guess somebody’s got to be the cliché, right? It’s how clichés are born.

I shrugged at his question, swiped at the sweat rolling from my forehead, and moved aside. “Kitchen’s downstairs.” I gestured to the steps.

He walked past me, letting his hand trail over my groin. Once I would have nearly come at the gesture. Now I ignored my d*ck because my mind was numb and had been for years. He might think he could reawaken my love and lust, but I was pretty f*cking sure that ship had sailed and gotten lost at sea. 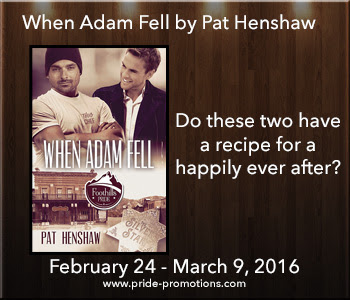 This is the first book I've read by Pat Henshaw, and I'll definitely be reading more by this author in the future.  When Adam Fell is a good, quick read and is a second chance romance.

I thought both main characters were strong individuals, both with their own things to overcome and both emerging stronger in the end.  As individual characters, they were both likable and easy to relate to.  My only hesitation is how quickly they came back together once Jason (David) returns.  I understand that it happened quickly mostly due to the length of the book, I just would have liked to see a more gradual reconciliation.

There's a great supporting cast in this story, and I look forward to reading the other books in this series to hear their stories.  I really liked how supportive they were of Adam.

There's not a whole lot of drama/angst, it's more seeing the two of them come back together and how that develops.  Intimate scenes are behind closed doors and just hinted at, but you can still feel the connection between the two characters.

3.5 stars for When Adam Fell, recommended for M/M romance fans 18+ for adult language.

From: When Adam Fell

1. What do you consider your greatest achievement?
I beat my drug addiction. Not many people get to say that who are users. It was and is tough, but I did it.

2. If you could have any job or profession, what would it be?
I’m happy where I am as the manager of the Silver Star Restaurant in Stone Acres, California. I enjoy all of it—from making the staff schedules, hiring, and cutting their paychecks to walking through the restaurant making sure diners are having a good time.

3. What is your biggest regret?
That I started taking drugs and partying every night and day in San Francisco while Adam needed my love and support the most. After all he did for me when we were growing up, I can’t believe I was so thoughtless and selfish.

4. What is your favorite food?
Anything Adam cooks. Really, I don’t have a very sophisticated palate. If he fixes me a PB&J on Wonder bread, I’m happy and it’s my favorite until he feeds me something else.

5. Who is your hero?
I’d say Adam, but it’s probably getting old—even though it’s true. You can’t start much lower than we did growing up, and he’s made a success of himself through tenacity and hard work. Not many superheroes can say the same. 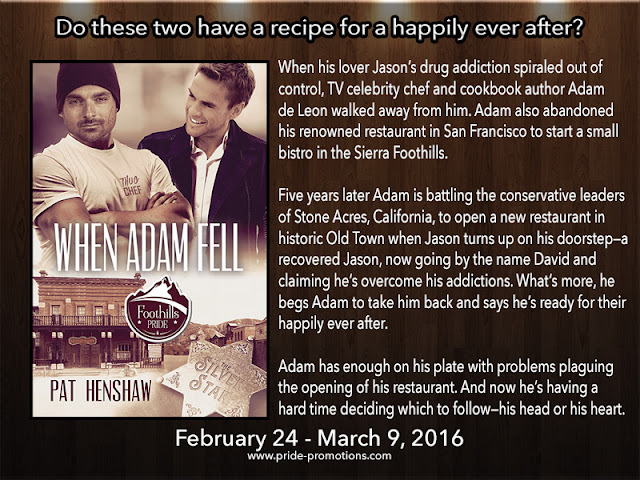 Author bio:
Pat Henshaw, author of the Foothills Pride Stories, was born and raised in Nebraska where she  promptly left the cold and snow after college, living at various times in Texas, Colorado, Northern Virginia, and Northern California.  Pat enjoys travel, having visited Mexico, Canada, Europe, Nicaragua, Thailand, and Egypt, and Europe, including a cruise down the Danube.
Now retired, Pat has spent her life surrounded by words:  Teaching English composition at the junior college level; writing book reviews for newspapers, magazines, and websites; helping students find information as a librarian; and promoting PBS television programs.
Her triumphs are raising two incredible daughters who daily amaze her with their power and compassion.  Fortunately, her incredibly supportive husband keeps her grounded in reality when she threatens to drift away while writing fiction.