Review, Excerpt & Giveaway: FINDING HIS FANTASY by Deanna Wadsworth-Includes Q&A with the Author! 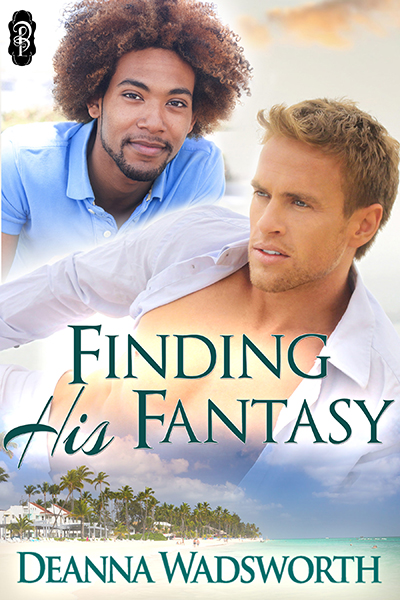 (Please note: Many authors have contributed to this series. Finding His Fantasy is Deanna’s fourth addition.)

Blurb:
Forty-eight year old art gallery owner Paul Strait loves the nightlife—wild parties, stiff cocktails, and even stiffer men! But his decadent lifestyle has grown lonely and now he’s looking for love. Some days it seems that what he wants must be a fantasy. Hoping that the perfect guy is out there he enlists the help of Madame Eve.
After all, a fantasy service like 1Night Stand should be able to deliver his fantasy man, right?
Josef Debrossé runs an exotic gay bar in the Caribbean known only to locals and select tourists. The many patrons coming in and out of his bar ensure Josef never has a shortage of lovers but he’s grown tired of being just a vacation fling.
Josef wants to be another man’s lover and partner, not a mere souvenir from the islands.
Lost in a dance of lust and allure, both men are thrilled with Madame Eve’s choice for them and feel an intense connection the moment they meet. Flirting over drinks quickly leads to the bedroom. But after their fiery lust has been quenched, the night goes from fantasy to reality without warning. Secrets and frightening pasts threaten to shatter the magical illusion of their perfect date.
Will this budding romance survive in the face of reality?
Goodreads Link 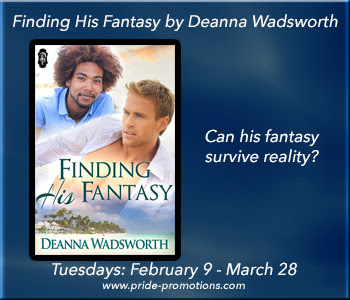 Excerpt:
“I am Josef Debrossé.” He had yet to release Paul’s hand—not that he had any complaints— and his blood warmed from touching a total stranger he’d paid to meet.
He let out a breathless chuckle, not surprised he’d been holding his breath.
“Paul Strait,” he replied, caught up in something...giddiness? Excitement? Sexual tension? He wasn’t sure, but he felt like a silly girl swooning on her first date. Almost as an afterthought, he added his signature tagline, “And I’m anything but.”
A rich resonant laughter danced around them, weaving a spell and capturing Paul inside it until he didn’t even know which way was up or down.
“C’est bon, Paul Strait,” he said, those hypnotic eyes sparkling.
When Josef released him, he had to resist the urge to take the man’s hand back and never let go, fearing he might disappear. Instead, he downed the rest of his champagne, scolding himself for being so ridiculous. He nodded toward the bar where plenty of stools sat open. “Can I buy you a drink?”
At the resort, everything was included, but it seemed like the most logical thing to say. Much classier than, “Are you wearing underwear?”

I liked the premise behind Finding His Fantasy, and the story delivered on it quite well.  The idea of two people finding each other through a fantasy service, optimistic it will lead to more than just a single encounter sets up a hopeful scenario that has the reader hoping right alongside the characters.

When it comes to the characters, I did find that I liked Josef much more than Paul.  Paul came across as somewhat elitist, though I did sympathize with his desire to find someone with which to settle down.  Josef felt more laid back and to me was more likable.  The one thing I didn't like about either was the smoking (sorry, I'm a non-smoker and am not a fan of characters who do...just a personal thing, but it does make it harder for me to warm up to a character), and the casual drug use mentioned in the story in Paul's past as well as the current day use-for me this is just a turn off.

Now, the rest of it?  The chemistry between the characters is fantastic and easily believable, as is the quick development of things between them.  Their troubled pasts that they share with each other allow the reader to care about both of them finding happiness, so that you get satisfaction with the way the story progresses and ends.

This is novella length so things do happen very quickly, but it does work with the story that is presented.  Finding His Fantasy was a 3.5-star read for me, and M/M romance fans will find this a good, quick read especially if you are a fan of older characters (Paul is 48 in this story).  For those 18+ due to adult language and M/M sexual content.


Meet the author:
Deanna Wadsworth might be a bestselling erotica author, but she leads a pretty vanilla life in Ohio with her wonderful husband and a couple adorable cocker spaniels. She has been spinning tales and penning stories since childhood, and her first erotic novella was published in 2010. She has served multiple board positions at her local RWA chapter and with Rainbow Romance Writers of America. When she isn’t writing books or brainstorming with friends, you can find her making people gorgeous in a beauty salon. She loves music and dancing, and can often be seen hanging out on the sandbar in the muddy Maumee River or chilling with her hubby and a cocktail in their basement bar. In between all that fun, Deanna cherishes the quiet times when she can let her wildly active imagination have the full run of her mind. Her fascination with people and the interworkings of their relationships have always inspired her to write romance with spice and love without boundaries.
Website │Facebook │ Twitter │Pinterest │Goodreads
You can also find her young adult alter ego, K.D. Worth Facebook│Twitter
Buy Deanna’s books at Dreamspinner Press, Decadent Publishing or at any reputable eBook seller

Give us ten tips for becoming a better writer.