Spotlight-Review, Excerpt & Giveaway: HIS TO KEEP by Terri L. Austin 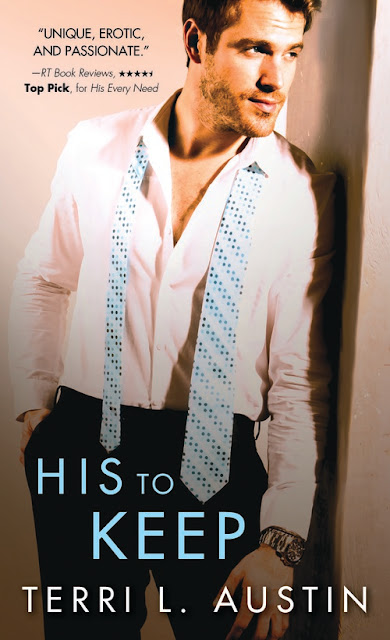 About His To Keep:

Iain wasn’t just rough around the edges—he was uncivilized, despite all the elegant trappings and expensive suits. And Brynn wanted more of it. She wanted Iain in full-on barbarian mode.
She wanted to be taken.

Filthy rich British bad boy Iain Chapman made a name for himself as a ruthless businessman, but if he can secure an investment from Vegas powerhouse Trevor Blake, Iain could take his business to the next level. Solution? Hire beautifully timid corporate trainer—and Trevor’s sister-in-law—Brynn Campbell and seduce his way to success.

Brynn’s everything Iain is not: kind, delicate, decent. But she’s also got a taste for something a little beastly, and it doesn’t take long for Iain to break through her every inhibition. Brynn was supposed to be his pawn, but as Iain gets closer to his goal, he begins to realize he’s not ready to let her go, not now, not ever—even if it costs him everything.

The first time he’d laid eyes on her had been at an evening garden party, a benefit for her family’s cancer foundation. He’d paid a fortune for a ticket in hopes of meeting Trevor. While wandering through the garden, Iain had spotted Brynn, and he’d been struck immobile. It wasn’t just her beauty or that delicate, graceful quality that captured his attention. No, it was the way she held herself apart from the crowd and observed everyone around her, as if, despite being who she was—the sister-in-law of the wealthiest man in Vegas—she didn’t quite feel comfortable in her posh surroundings. It had reminded him, uncomfortably, of himself.
And he hadn’t been able to look away.
He’d watched her for the better part of an hour. Though she tried to hide in plain sight, Iain couldn’t take his eyes off her. He saw her clearly, so why couldn’t anyone else? And when he’d begun to approach her, she’d turned on her heel and flitted away, into Trevor’s monstrously large house. Trevor had also disappeared before Iain could introduce himself. Nevertheless, he’d stayed until the end of the party, hoping to catch another glimpse of Brynn, without any luck. She’d stuck in his head ever since, though he couldn’t for the life of him say why. Now he was finally going to meet her properly.
About bloody time, too. All it took was an elaborate ruse and several thousand dollars to draw her out of her hidey-hole.
Not that this was about Brynn, he told himself. He had a goal. He was going to stay focused on that goal— she was just a bloody bonus.
“It feels wrong,” Marc said, “using this girl to get to her relatives. Seedy, yeah?”
“It’s called networking. No different than glad- handing at a cocktail party or going to a charity dinner in order to meet serious players. It’s just business. You know we’ve tried every other avenue. Blake’s lawyer won’t return our calls. I even tried to play up the expat angle with him, but I couldn’t get a meeting. Trevor Blake is a bloody fortress.”
Marc stopped treading over the hand-loomed rug. “While I’m not convinced that this is our best solution, the course she’s teaching might actually do you some good. Your leadership skills are a bit lacking, aren’t they?”
Iain paused, the cup midway to his lips. “What the bloody hell are you on about?” Iain was leadership personified. He had the portfolio and bank balance to prove it. “There’s nothing wrong with the way I lead, mate. I get results.”
“You do,” Marc agreed. “But you also hack off a lot of people. And those you don’t offend are scared sh*tless of you.”
“Good.” He didn’t give a damn if people feared him, as long as they did their jobs properly. This wasn’t a popularity contest. No one got a prize for congeniality. “If they don’t like working here, they’re free to quit.”
“Which explains our high turnover rate. You could stand to be a little nicer to people. Wouldn’t kill you none, would it?”
“My gran used to say you catch more flies with honey than with vinegar.”
“That’s daft. Why would I want to catch flies?”


Iain is one of those men who is determined and forthright-even when he really shouldn't be.  He's full-on alpha, so much so that he can sometimes be a bit overbearing while at the same time he's deliciously sexy.

Brynn is one of those women that just about anyone can walk over.  She has a hard time sticking up for herself, and it was good to see her character grow from that during the story.  She and Iain are the true definition of opposites attracting.

I found His To Keep to be pretty darn entertaining, and Brynn and Iain to be a fun though wildly mismatched yet totally complementary couple. But watching them maneuver around each other and their characters grow and evolve made for a good read.  Iain was my favorite, especially when he was being totally inappropriate (that's when he was the most fun!).

A very enjoyable and diverting story, His To Keep was a solid 4-star read for me.

Award nominated author, Terri L. Austin, spends her time dreaming up fierce heroes and snarky heroines. At night, she watches too much reality TV, then blogs about it the next day. She met her own Prince Charming in the middle of a bridal shop, and they’ve been together ever since. Catch up with her on Twitter, Facebook, AllAboutTheTea.com or at TerriLAustin.com. She loves to hear from readers.