Synopsis:
The New York Times bestselling hockey series featuring the Carolina Cold Fury continues as the team’s most notorious party animal gets blindsided by the one that got away.

Off the ice, elite defenseman Hawke Therrien enjoys his fair share of booze and good times. And why shouldn’t he? He’s worked his way up from the minor leagues and made himself a star. The only thing Hawke misses from that life is the pierced, tattooed free spirit who broke his heart without so much as an explanation. She’s almost unrecognizable when she walks back into his life seven years later—except for the look in her eyes that feels like a punch to the gut.

Vale Campbell isn’t the same girl she was at twenty. As crazy as she was about Hawke, her reckless behavior and out-of-control drinking were starting to scare her. She had to clean up her act, and that would never happen with Hawke around. Cutting him loose was the hardest thing Vale ever had to do—until now. Because she’s still crazy about Hawke. And if he could ever learn to forgive her, they just might have a future together. 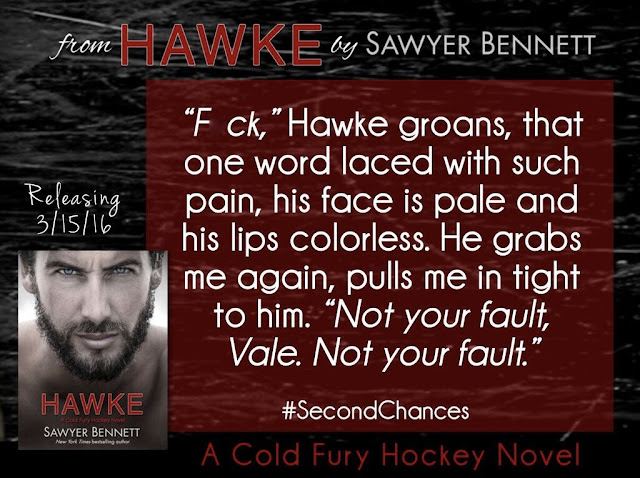 I've been a huge fan of the Cold Fury series right from the start, and every single book in the series is a consistent reminder of the excellent storytelling and addictive characters that Sawyer Bennett always writes.

Here in Hawke's story, we get a second chance romance with a very difficult set of circumstances-but we don't find out for quite a long time exactly what went down the first time around to cause the breakup of Hawke and Vale when they were younger.  For me, it was very frustrating not knowing, and when I finally discovered the true backstory, it was a huge relief to finally know the "why" of things.

Hawke and Vale are both great characters on their own, but for me Hawke is the clear favorite.  At times Vale came across as stubborn and would jump to conclusions too easily.  I didn't agree with her handling of things between them the first time around, and I had a hard time connecting with her character and I clearly sided with Hawke in just about every situation between them.  When it came to the relationship between Hawke and Vale, we are told of their feelings toward each other, but for me I never really FELT it.

The pluses in the story definitely included the intimate scenes--there's no doubt that the two of them together are positively scorching.  The plot arc with Vale's father will surely pull at your heart (her father Dave is a really great character).  And as always with Sawyer's books, this is well written and does have good depth of story as well as the characters.  Oh, and it kind of goes without saying that Hawke being a hot and sexy star hockey player is one of the biggest pluses ;-)

But for me, I just didn't feel an overwhelming connection between Hawke and Vale like I have with the rest of the Cold Fury couples, and this made Hawke a 3.5-star read for me.  But if you're a fan of the series, this is still a must-read, and is recommended for readers 18+ due to adult language and sexual content. 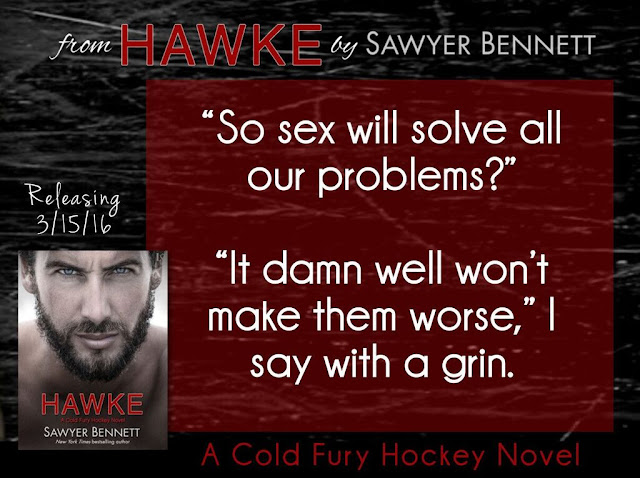 New York Times and USA Today Bestselling Author, Sawyer Bennett is a snarky southern woman and reformed trial lawyer who decided to finally start putting on paper all of the stories that were floating in her head. Her husband works for a Fortune 100 company which lets him fly all over the world while she stays at home with their daughter and two big, furry dogs who hog the bed. Sawyer would like to report she doesn't have many weaknesses but can be bribed with a nominal amount of milk chocolate.

Sawyer is the author of several contemporary romances including the popular Off Series, the Legal Affairs Series and the Last Call Series.