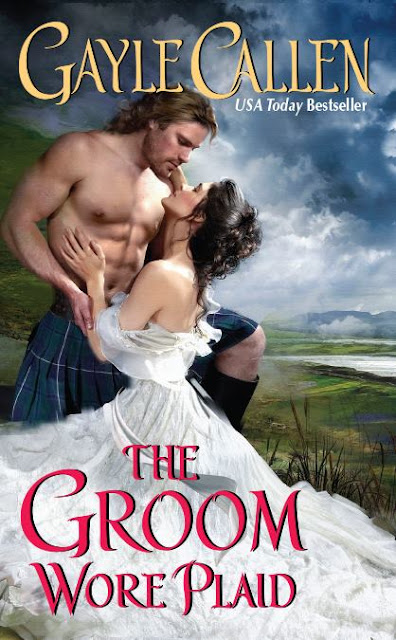 Maggie McCallum’s dreams about her new fiancé aren’t the romantic sort. It’s not just that she was bartered to Owen Duff like a piece of property to end a clan feud. She’s also haunted by premonitions of his death on their upcoming wedding day. Yet the exasperating Highlander won’t let her call it off, even though his life and his clan are both in jeopardy.

Owen has wanted Maggie in his bed since he first glimpsed her years ago. If their union restores peace between their clans, so much the better. But while lusting after another chief’s sister had its risks, growing to trust Maggie is far more dangerous. Owen is falling deeply in love with the one woman he cannot hope to claim…and survive.

If you're looking for a classic historical Highlands romance, you'll find it here in The Groom Wore Plaid.  There's plenty of angst, tension of all kinds, mystery, suspense...and of course romance--although Maggie tries to avoid that at all costs since her visions of future events tell her that her betrothed, Owen, will have his life in danger.

Now, I will admit that for most of the story I wasn't really feeling any connection between Owen and Maggie.  Between his disbelief of her visions and her distrust of him over his disbelief, it made it hard for me to get any kind of emotional connection between them.  It does become much more evident later in the story, but until then it was a bit frustrating for me since I really couldn't sense a true link between them.

But the wonderful writing and the storyline that keeps you guessing as to the true villain behind everything kept my attention smack in the middle of the story the whole way through.  All of the characters were very well written and had great depth, contributing to this well-rounded story.

If you're a historical Highlands romance fan, this will be right up your alley.  I personally would recommend reading the first book of the series, The Wrong Bride, before starting The Groom Wore Plaid as I definitely think it will enhance the enjoyment of the book.  A main plot point of The Wrong Bride continues here in The Groom Wore Plaid, and characters from the first book appear here as well, so knowing the story behind it all is a big plus.

This was a 4-star read for me, and I'd recommend it for fans of the genre 18+ due to some scenes with adult sexual content.

After a detour through fitness instructing and computer programming, GAYLE CALLEN found the life she’d always dreamed of as a romance writer. This USA Today bestselling author has written more than twenty historical romances for Avon Books, and her novels have won the Holt Medallion, the Laurel Wreath Award, the Booksellers’ Best Award, and been translated into eleven different languages. The mother of three grown children, an avid crafter, singer, and outdoor enthusiast, Gayle lives in Central New York with her dog Uma and her husband, Jim the Romance Hero. She also writes contemporary romances as Emma Cane.