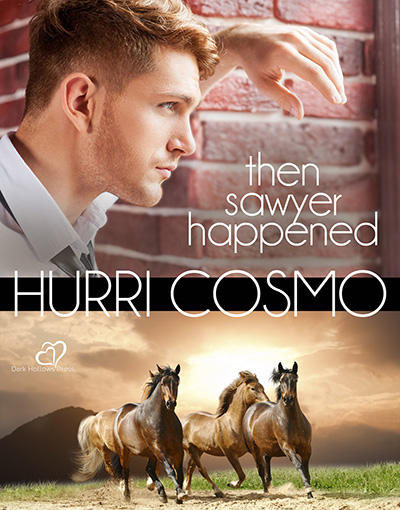 Trace is nursing a broken heart. He lost his job, his boyfriend of two years was cheating on him, and his apartment building burned right to the ground with all his worldly possessions. It was time for Trace to get out of Minnesota.

So Trace heads for Texas and Riven Creek Ranch, the horse farm his aunt Lois owns. But hours before he arrives, Lois is in a terrible car accident that nearly takes her life, and Trace finds himself in charge of the ranch kitchen. Sounds simple enough and it’s the least he can do for his recuperating aunt.

Sawyer is his aunt’s big, beautiful, muscle bound, incredibly sexy straight ranch manager. Someone who has no clue Trace is gay. And meeting the big man should have been okay, except it was in the middle of his aunt’s kitchen at five in the morning and Trace was nearly naked. Embarrassing? Yep. But the very next day Trace proceeded to ramp up his embarrassment by quantum leaps when he nearly sets his aunt’s house on fire and the brooding Sawyer has to come to the rescue.

Not to mention that Aunt Lois’s “accident” was actually attempted murder. And now, they just might want Trace dead, too.

Can Trace figure out who’s behind the attempts on his aunt’s life AND keep Sawyer from finding out he’s hot for the cowboy?

He probably can’t. But he’s going to try.


He looked up into the sky as not so distant thunder caught his attention. Surprisingly, the clouds had moved in fast. The bright afternoon had changed to dark overcast in the short time he had been out here. The light breezes felt charged.
“Oh yeah. That’s right.” Trace patted the horse’s neck when she whinnied, clearly nervous now, picking up the same vibes from the air. “I forgot there was a storm coming in.” Trace took out his phone and after a few taps on the screen he was able to bring up the weather radar. “Well, Maddie, old girl. Looks like it’s a bad one and it’s headed right for us. We have a little time though. Let’s still get to the gate to check it out, then…”
Trace looked up just when one of Maddie’s hooves sunk in the mud. Trace obviously hadn’t been paying attention to where they were. They had come up on the creek and the recent rains had swelled the banks making the trail muddy and soft and he had allowed Maddie to wander too close. She panicked and reared, throwing an unprepared Trace and his phone, into the water. Then she took off back the way they had come.
The creek wasn’t all that deep but even if it had been, Trace knew how to swim. It was the rock that banged his right knee that made him suck in water. Viciously coughing and desperately attempting to breathe, he managed to crawl back out of the swift moving river.


A few minutes later he was able to fill his lungs with sweet air, extremely thankful he hadn’t launched into an asthma attack. But even as happy as he was that he was alive and no longer trying to hack up a lung, the process of which brightened the pain from the beating he had taken yesterday, he knew he was never going to make it back to the ranch before the storm hit. 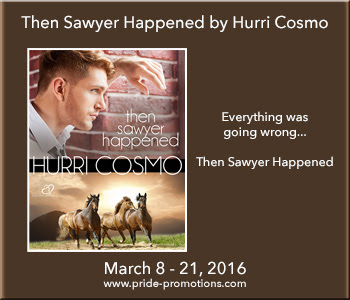 Hurri Cosmo is a new author for me, and after reading Then Sawyer Happened, I plan on keeping my eye out for more of her books and have added her backlist to my TBR.

The writing was excellent, with the story moving along quite well and never feeling rushed.  The characters were well developed and relatable, with adorable, klutzy Trace being my favorite.  Even though he claims he's not ordinarily a klutz, the situations he keeps getting himself into demonstrate otherwise and made his character even more endearing.  It also made for some funny scenes that had me laughing out loud.


The story has plenty of sexual tension, along with a heavy dose of suspense with the overt actions and words of the bad guys peppering the story at just the right points.  At times they do seem excessive, and as I read I was yelling in my head for Trace to just go tell someone what was going on, though I understood his reasons for not doing so.  And while the bad guys seem pretty obvious, don't get too comfortable with that perception (I know, I'm teasing you with that...).

Trace and Sawyer match each other well...and with Trace getting into trouble and Sawyer always coming to his rescue, it makes for an entertaining development of a relationship-especially since Trace thinks Sawyer is straight:


'Great.  Booze.  That was the last thing he needed.  The one thing that could take all reasoning away.  Reasoning like not jumping the big cowboy because he's straight.  And gorgeous.  And strong.  And f*ck man, look at those thighs flexing and those pecs...pexing.  And did I mention straight?  The cowboy is straight, the cowboy is straight...'


Loved the story, loved the characters, and the twist at the end made for an unexpected reveal that gave the story one more bit of a punch.  Oh, and the epilogue?  It's one to make you *sigh*...in a really good way.  4.5 stars for Then Sawyer Happened, recommended for M/M romance fans (especially those who love their cowboys and suspense) 18+ for adult language and M/M sexual content. 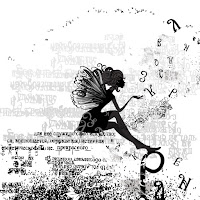 Hurri Cosmo lives in Minnesota where she holds tight to the idea that there, where it’s cold a good part of the year, she won’t age as fast. Yep, she avoids the truth as much as she avoids mirrors. But one of the reasons she loves writing is reality doesn’t always offer up a “happily ever after” and being able to take control of that is a powerful lure. Being a happy ending junkie, writing just makes them easier to find. Oh, she doesn’t mind “real life” and she does try to at least keep it in mind when she writes her stories, but she truly loves creating a wonderful couple, knowing they will fall in love and have their HEA. Every – single – time. And, of course, that is exactly the reason she loves reading this genre, too. Give her a glass of red wine, some dark chocolate, and her computer, whether she is reading or writing, and she will entertain herself for hours. The fact she actually gets paid to do it is Snickers bars on the frosting on the cake.