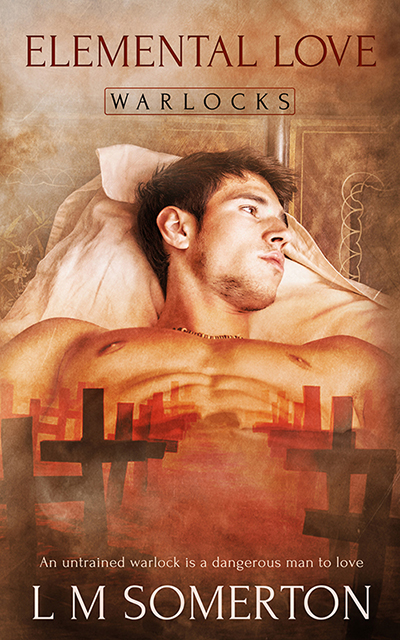 An untrained warlock is a dangerous man to love.

On his twenty-first birthday, Evrain Brookes discovers he is an elemental warlock. The spell suppressing his talent lifts and he has to get used to a whole new existence. The protection that kept him safe during his childhood is gone, his skills are wild and uncontrolled and there are those that seek to use him for their own gain.

Evrain’s grandmother is a witch, his godfather another warlock. Between them they do their best to keep Evrain on the right path. He learns that in order to gain control of his formidable powers, he will need to ‘channel’ through a life partner, a process that happens only with consent and through love. But how will he ever find a man prepared to put up with a Dominant warlock for a boyfriend?

Dominic Castine has no idea that Evrain’s grandmother sees him as a prospective partner for Evrain. He tends her garden and she teaches him about herbs—a trade-off they both enjoy. He is drawn to Evrain’s charismatic presence but doesn’t understand why he wants to drop to his knees and submit to him.

When Agatha is murdered, Evrain and Dominic are thrown together as she manipulates them from beyond the grave. Dominic becomes the pawn in a terrifying game between warlocks whose powers he barely comprehends.

In the end, lives will depend on his courage, his willingness to grant Evrain control and the power of love.

Reader Advisory: This book contains scenes of kidnap and a reference to attempted sexual assault. 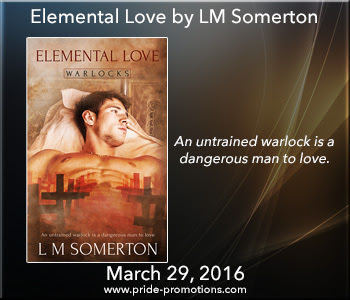 “Closed doors, I hate closed doors. Why don’t I have the power to see through them? That, at least, would be a useful ability.” Three-hundred-year-old floorboards creaked as Gregory Thanet paced the galleried landing of Wenlock House. He walked up and down past three doors, each fashioned from heavy oak and furnished with black iron hinges and handles. Two stood ajar, revealing hints of unoccupied bedrooms, but the third was firmly closed, a solid barrier to unwanted intrusion and the cause of Gregory’s current frustration.

“For goodness’ sake, Gregory, you’re wearing out the carpet. Be still.” Gregory’s companion leaned against the gallery rail and gave him an exasperated look.

Gregory paused his march briefly, shot a glare at the woman but then resumed his pacing with a grunt. “Leave me be, woman, I’ll be still when we know that everything is as it should be.”

“Nature moves at her own pace, you know that. There’s no changing it—nor should we. What will be will be.”

“Stop trying to sound like some wise and ancient soothsayer, Agatha. You’re not helping and it doesn’t suit you. The kid is a week late already—you’d think he would be keen to greet the world by now. When he’s grown I’ll remember that he kept me up half the night. I’m sure I’ll get plenty of opportunities for revenge when he’s older.” Gregory stopped and folded his arms across his chest.

“I might not be able to see the future, Gregory Thanet, but even a complete idiot could have predicted that my grandson would arrive today.”

Gregory examined his companion. Agatha looked tired. Her skin was quite smooth, marred only by a few laughter lines around her hazel eyes, eyes that still sparkled with warmth and intelligence. Her silver hair was swept smoothly back and fastened with a comb, intricately fashioned from beaten copper. She remained an attractive woman, who must have possessed great beauty in her youth, but she looked paler than usual and she rested her weight against the banister rather than standing in her usual ramrod-straight stance.

Gregory experienced a rare pang of guilt that he might be adding to his friend’s worries. “All Hallows’ Eve. There’s a lot of power in the air right now.”

Agatha cocked her head to one side and closed her eyes as if listening to sounds that only she could hear. “My grandson will be with us soon and there is little that you or I can do to change the course of his destiny.” For a moment, a worried frown creased her forehead. “It is not certain that he will inherit the gift.”

Gregory sighed. “In this, you deceive yourself, Agatha. The calling has skipped a generation. History dictates that the next born will be unusually powerful and that power will be magnified even further in a male child.”

“There has been no warlock in my family line for over five hundred years, only witches. Why are you so convinced that it will change now? We know of only three others living, Gregory. You, Symeon Malus and Constantine De Vries. It would be a chance in a billion.”

Gregory scratched the tip of his long nose. “I should have bought a lottery ticket then. All the portents point to it, the date alone… It is time. Time the triangle became a square.”

“I’m not sure Symeon Malus will ever be part of that square,” Agatha said. “I don’t see him as the cornerstone of anything with value or integrity.”

“True, and if the child is born with the power, you and I will need to ensure that Symeon’s gaze remains elsewhere.” Gregory shivered. “I swear to the goddess, this country is the dampest place on earth. It’s all right for you, Agatha, you live in the second dampest place on the planet. You’re used to groping through fog. I want to get back to Florida. I need to—before I develop trench foot.”

“Pah. What you really want is to get back to Coryn. You’re a ship without an anchor when the two of you are apart. He could have come to see the child too, you know.” Agatha grabbed a stray hair and pushed it back into a restraining grip.

“Coryn hates airplanes, you know that. I would never ask him to fly across the pond unless it was a life or death situation.”

“He reckons that if men were designed to fly through the air, then human cannonball would be a much more popular career choice.”

Agatha snorted. “I think his phobia is a myth. He just uses it as an excuse to get a few days’ break from your—” She whistled and twiddled her fingers in the air.

Gregory rolled his eyes. “Twiddling your fingers that way will get you turned into an aardvark. It takes practice to bend your digits into shapes imbued with power. After thirty-two years together, Coryn is more than capable of dealing with my—” He whistled. “As you so delicately put it.”

Agatha snorted. “Men with magic! Whoever the hell thought that would be a good idea was seriously damaged.” She shook her head slowly.

The mewling cry of a newborn sounded from behind the closed bedroom door, and Agatha allowed her lips to curve into a smile.

“Well, it seems the waiting is over. I have a grandchild—and, from the sound of that bellowing, he’s a fine, healthy boy.”

“About damned time.” Gregory grouched. He still smiled right along with Agatha.

Agatha crossed the landing and knocked softly on the door, which soon swung open to admit her. Gregory followed her inside, pushing down his excitement.

The bedroom was bathed in the cool light of a new dawn. The soft green of the walls seemed to shimmer and the wooden floor was burnished with gold. Gregory looked around in wonder, then dragged his gaze back to the bed.

“Lyssa, James—congratulations, my dears!” Agatha clapped her hands together in delight as she walked over to the bed.

Gregory hung back a little, giving her the privilege of first viewing.

Agatha’s daughter, Lyssa, sat up in bed propped against a mound of pillows. She was pale, her eyes shadowed in the purple of exhaustion, but still she glowed with radiant happiness. A small bundle wrapped in a pale blue blanket rested in her arms. Her husband, James, sat nervously on the edge of the mattress, looking utterly shell-shocked but delighted as the midwife fussed around them.

Lyssa held the baby out to her mother with a smile. “His name is Evrain. Evrain James Brookes. Hold him, Mum, isn’t he beautiful?”

Gregory held his breath as Agatha reached for the small bundle and cradled the child in her arms. She pushed the blanket back from the baby’s head, and a mop of thick black hair was revealed, sticking out in all directions.

“He is absolutely gorgeous, darling. Didn’t you both do well!” Agatha stroked the child’s hair.

Gregory moved in closer. Tiny fists punched at the air, so Gregory offered the boy his own hand. Immediately, the baby grabbed hold, wrapping his fingers around Gregory’s offering with surprising strength. Gregory grinned at Agatha in delight, then looked back to the baby. His eyes were the dark blue of every newborn but, as Gregory focused his senses on the child, he could see that they would become dark green. Just a shade deeper than his own.

Cooing softly, Agatha muttered a lilting incantation and rocked the baby gently. To Lyssa and James, the song probably sounded like a lullaby, but Gregory knew a spell when he heard one. Tiny eyelids closed and the baby slept. Gregory’s finger was released. After a few more minutes of cuddling, Agatha reluctantly returned the baby to his parents.

This is a new-to-me author, and I'm really looking forward to reading more not just in this series, but from this author in general.  I really liked the way the writing flowed, and the storytelling was quite good.  There was suspense, sexual tension, drama all woven together to create a story that I didn't want to put down.

Evrain does come across as extremely cocky, and Dominic as his total opposite-shy and introverted.  I actually felt like they were just a tad short of fully clicking together, mostly due to Evrain's overly cocky attitude that almost overshadows Dominic...but in the end, he really does demonstrate how much he feels and cares for Dominic so I was happy with the way things turned out in the end.  I also liked how their relationship wasn't rushed, even though the importance of them being together was continually stressed.

I liked the supporting characters, I found Evrain's grandmother to be quite strong and his godfather Gregory was funny, smart and supportive.  Symeon and Damon were great in their dastardly roles.

There's some strong groundwork laid here for future books in this series, and I'm really looking forward to reading more (and would be thrilled to get a Gregory and Coryn story as well!).  Elemental Love was a 4-star read for me, and I'd definitely recommend it to M/M paranormal romance fans 18+ (for adult language, violence and explicit M/M sexual content).