When a cowboy meets the guy from the city, he can't know how much things will change.

On the spur of the moment, with his life collapsing around him, Jay Sullivan answers an ad for a business manager with an expertise in marketing, on a dude ranch in Montana. With his sister, Ashley, niece, Kirsten and nephew, Josh, in tow, he moves lock stock and barrel from New York to Montana to start a new life on Crooked Tree Ranch.

Foreman and part owner of the ranch, ex rodeo star Nathaniel 'Nate' Todd has been running the dude ranch, for five years ever since his mentor Marcus Allen became ill. His brothers convince him that he needs to get an expert in to help the business grow. He knows things have to change and but when the new guy turns up, with a troubled family in tow - he just isn't prepared for how much.

"... This is a beautiful love story between two men, each with secrets they are afraid to reveal. ..."

“This series is a winner because of it's cowboy theme - who can resist a gorgeous cowboy!” - Because Two Men Are Better Than One

“I always enjoy cowboy stories and, as you would expect from RJ, this one is smoothly well-written and pulls you forward chapter by chapter.” - Goodreads Reviewer

“This story pushed every button that makes me fall in love with a book.” - Goodreads Reviewer

“ This wonderful story reminded me of exactly why I fell in love with RJ Scott's storytelling.” - Goodreads Reviewer

At one point, when he was trying not to stare at the dancing, he spotted Liam across the room and they exchanged heated looks. Nate recalled the young guy bending over for him the last time he was here. Maybe he could get some more of that tonight. Maybe f*cking Liam into the mattress would stop the irritating thought that he wanted to f*ck Jay instead. Or that he wanted Jay to do the same thing to him.


Jay made it through three tracks of music, and when he made no sign of moving from his place alongside two men, Nate had to make a move. He sucked it up and joined the fray.

Nate was immediately swallowed into the crowd and instinctively began moving to the beat of the song as he walked closer. When he finally made it to Jay’s side, he patted him on the shoulder. Jay spun on his heel and Nate held out a hand to steady him.

“Cowboy!” Jay shouted over the music.

In a sinuous movement, Jay gripped one of Nate’s shoulders and shuffled closer so that very little separated them. The two men dancing with Jay drifted off to face other dancers, and suddenly it seemed like it was just Nate and Jay swaying to the music.

“You need to be careful!” Nate shouted close to his ear.

“Why?” Jay shouted back.

His breath smelled of beer and his body scent was a mix of the infuriating aftershave mingled with sweat and dust. Suddenly Jay became a four-course meal and Nate was very hungry.

As if to make that comment mean nothing, Jay deliberately closed his eyes and moved to the beat of the music. Somewhere along the line, Jay had lost his bottle of beer, or finished it, or whatever. He had both hands free, and he used them to steady himself by gripping hard to Nate’s shoulders. He had closed his eyes and was mouthing the words along with the song. Was he aware it was Nate holding him? He’d said “cowboy,” they’d spoken, but there were a lot of cowboys mixed in with the bikers and the other varied clientele.

“Open your eyes, Jay,” Nate shouted over the music.

Jay did as Nate had asked, and Nate was suddenly seeing brown eyes glazed with emotion. Then Jay smiled and closed his eyes again.

Instinctively Nate steadied Jay and that meant his hands rested on Jay’s hips. The feel of the man beneath his touch was intoxicating and Nate held hard. Jay fit into his arms perfectly: a little shorter, a little slimmer, just the right height, and his lips, damp with sweat or beer—Nate didn’t know—were what he zeroed in on. Jay swayed with the music. The move took them closer and f*ck, Jay was hard. Nate gave in to the temptation and pressed them closer still until he was sure Jay could feel how hard he was as well.

All thoughts of impropriety or fears of rejection flew out the window. Nate was lost in the smile of pleasure that curved Jay’s damp lips. What would he taste like? Would Jay return the kiss? Would Jay push him away? How could he risk this? He eased his hold on Jay’s hips and slouched a little so that their groins aligned—suddenly they were frotting firmly and rhythmically to some Eminem mix. There was no way he could stop himself.

Jay smiled at him, but it wasn’t clear that he’d heard what Nate said. Hell, he should kiss Jay and stop all this delay in taking what he really wanted. Someone jostled him from behind and the movement threw him off his spiral of the pros and cons of denial. When the person who jostled them attempted to insinuate themselves between Nate and Jay, abruptly everything was clear.

“F*ck off,” Nate shouted clearly to the interloper, and in a quick move, he got his first taste of the sexy city boy. The press of his lips against Jay’s was intoxicating, and they kissed and swayed to the beat of the music. Their hard c*cks pressed together and—finally—the kiss deepened. Jay let him in and Nate took every advantage. F*ck the fact Jay worked for the ranch, f*ck that they had absolutely zero in common, forget that Jay had a degree and a life that would take him far away from Nate’s world sometime soon. 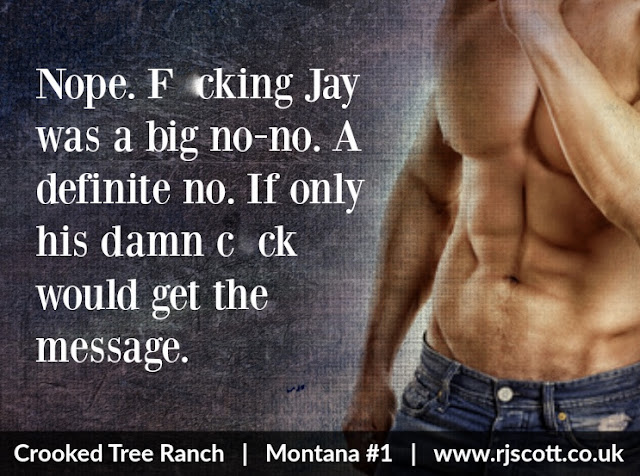 This is the second book that I have read by this author, and I'm really going to have to find a way to convince my husband that I need her entire backlist ASAP.  He can consider it an early birthday present ;-)

I loved the characters, both main and supporting.  I don't think I could pick a favorite, it would be one massive tie.  Nate is so strong, loyal, protective and let's not forget...cowboy!  He so readily became the leader of his family when tragedy struck, and even as solid as he appears, you can still feel a bit of vulnerability when it comes to him and Jay together.  Jay has a similar past--having to become the caretaker of his family--and is extremely devoted to their happiness and well-being.  He's also very smart, and has a fun side when it comes to leading Nate where he wants him.

A lot of the story centers upon the ranch itself and the issues it has that Nate and the others are trying to overcome.  The one thing that I wished the story would have had is more interaction between Nate and Jay.  With everything else that was going on, I just would have liked to have seen more of them together so I could better see the development of their relationship in that respect (no, I'm not talking intimate scenes, I'm just talking in general).

But even with that wish, I still loved the story-it really kept me engaged and with my fingers crossed that everything would work out between Nate and Jay.  It's always a good read when you have two main characters who seem so much at odds realize that they are actually what the other wants.  I really enjoyed the alternating points of view from Jay and Nate, it added depth to the story being able to hear both of their sides.

4.5 stars for Crooked Tree Ranch, and I can't wait to read more in this series.  Recommended for fans of M/M romance 18+ (especially if you are fans of cowboys) as there's adult language and M/M sexual content.

Now if you'll excuse me, I need to go start on convincing my husband that I NEED the rest of RJ Scott's backlist...