Warning you now...this is pretty long...

Last January I completed my first half marathon at Walt Disney World. Not even two weeks later I had made the decision that I was going to register for the Disney full marathon for 2011. I figured I had a whole year to train so it should be no problem. Yeah...

After getting pretty burned out after doing my first three half marathons plus some shorter races in less than 90 days, I wound up taking much of the summer off and started training for the full around mid-August. Training went well until I hit my 16 mile LR...when I first found out what sore feet REALLY meant. Same thing for my 18-miler. I was reassured some when my 20-miler went well with almost no soreness but still was nervous in the days leading up to the race.

I left for WDW on Thursday after work but was too late to check out the expo so just headed to Pop Century to check in and crash. Friday morning I got up early to get some walk/jog time in before heading over to pick up my race packet. I was at the expo when it opened so was able to get in and out pretty quick. The goody bag didn’t really have a lot of “goodies” in it, a lot more flyers and ads for other races...and I was disappointed it was just the plastic bag that we could use for bag check and not like the nice mesh drawstring bag we got last year. I did pick up the “I did it” shirt and a cool t-shirt that said “Runner by day, Park Hopper by Night” which I just LOVE. Spent the rest of the day at Epcot with my husband who was able to finish work early and come join me for the weekend. Saturday I decided to just take it easy with a leisurely breakfast and just spent the day reading and relaxing---I didn’t want to be on my feet at the parks all day. Went to bed about 8pm with my alarm set for a 2:30am wake-up.

DH got me up just before the alarm was supposed to go off and stayed up until I left for the bus (HUGS to him!). I was on the bus by 3:15am along with some of my Running of the Ears friends and we made our way over to the “H” tent to meet others from our group before the race. I had my pre-race PBJ sandwich while waiting to head to the start, then tried to remain calm so it would stay down. Walked to the start line with Julie, Mark, Nancy and Tricia...Julie, Mark and I entered Corral H and made our way as close to the front as we could get. As each wave was sent off I felt a little more nervous, then finally it was our turn and we were off!

I started out running for the first thirty seconds or so, then settled back to walking for the first mile and a half until I started my walk/run intervals. I was doing a 30 second run/90 second walk which had been working well for me during training (that summer break totally put me back at square one after working my way up to a 3 min walk/2 min run before the Disney Half last year). I was able to keep that up through a little more than 8 miles. My back had started to bother me around mile 6 so I popped some Tylenol to try and keep it in check. With the exception of mile 1 when I was getting warmed up (cause you know standing around in the corrals for 45 minutes before our start just killed any kind of warm up you might do before), I was doing between 15:22-16:05 minute miles. I was confident early on that I’d be able to keep that up so I stopped for some pictures with Pluto, Chip and Dale then again with Eeyore and Tigger, then Woody and Jessie and finally the Pirates of the Caribbean (and boy, that last one it really looks like Johnny Depp/Jack Sparrow and Captain Barbossa!). I got to see Tracy at the #7 water stop which was a lift! 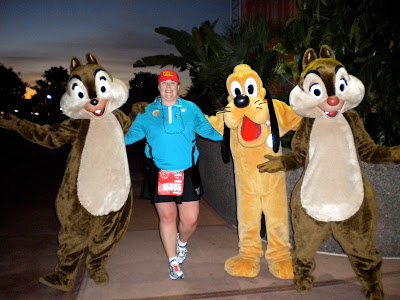 After I hit mile 9, my body said it didn’t want to run anymore so I switched over to just walking but still doing 16 minute miles...then after mile 11 my back really started to howl at me so again with the Tylenol and my pace started to slow a bit. That’s when I started to see those people on the bikes with the little orange flags in their packs. They were all very encouraging to everyone, letting us know we were still X minutes ahead of pace every mile or so. I lost enough time though that a little before the mile 17 sign, the TNT coach/pacer that was at the back of the pack was telling everyone, “come on everyone, pick it up, run for the next mile sign” because the infamous lady wearing the balloons to signal the 16mm pace point was almost upon us. So about thirty of us just started running all-out until we crossed the 17 mile sign...this happened again at mile 18 and when I realized how much I’d dropped off, my brain just blocked out what my back was saying (the Tylenol helped with that too LOL) and I really started to pick it up. I also saw fellow Running of the Ears members Colleen and Dawn just after leaving Animal Kingdom and they were there cheering away---thank you ladies, that REALLY gave me a boost!!! To the point where mile 19 was actually my fastest mile of the race!
I actually was still trying to get back ahead at mile 20 where I saw my first orange flag (ran to get past that one!), then kept booking it to make up time-I didn’t want to see those bike people and their little flags anymore. Heading in toward Hollywood Studios I heard a car horn honking and people yelling my name, and there were Colleen and Dawn again, cheering me into DHS as they were driving by! You two were really spurring me on, thank you so much!! (((HUGS))) There was a guy next to me when you were driving past that said “hey, they look like they know you, you should ask them for a ride”. I was actually passing people I hadn’t seen the whole race since they had always been way up ahead of me! I even caught up to Santa (did you all see him? Santa actually did Dopey!) which was fun with the spectators that were calling out to him and the kids with the wide eyes and open mouths so surprised to see Santa in the race, just more to keep me excited even though by this time my feet were starting to hurt. I got to see Tracy again and she walked with me for a little bit to make sure I was doing good (THANKS Tracy, HUGS to you too!!).
Once we exited DHS, I saw one last place they had the special “Parade Buses” for those being swept in the parking lot...after that though I knew there was nowhere left they could sweep...I was SAFE! I must confess, I did slow a little here as I was really feeling it in my feet-my brain was still blocking out anything my back was saying. Saw more ROTErs along the walkway to the Boardwalk (I remember Cath offering me water and was that also Chris there? I can’t remember anymore, it’s all becoming a blur, but believe me, you were ALL very appreciated!). Then suddenly, I was re-entering Epcot! I was almost there! A little more than a mile to go! More ROTErs! Erica giving me Twizzlers and walking with for a bit making sure I was doing good, thank you so much! Around the world I went, then heading toward Future World and there’s Joey telling me I’m doing it!
And suddenly, there’s the turn and that 26 mile sign, I can hear the crowd and the announcer ahead...I straightened myself out and suddenly I could see the grandstands and finish chute...and my DH, best friend and godson (who was ringing the cowbell Julie gave me during the half to cheer with like mad) were right there at the fence before the bleachers started----I beelined straight over, slapping hands while they cheered as I headed to the finish line where I got a high five from Donald as I stepped across and heard the announcer calling out my name and city (since by that time there weren’t tons of people crossing together so he could call out people individually)! OMG I just finished a MARATHON! Me! I kept wandering along and saw a ROTEr (Snowball/Anita I think?) handing out mylar blankets so headed straight for her...and then there were the people passing out the medals. My Mickey medal. For finishing a FULL marathon. Me!

Finally I made my way to the H tent where I found Julie waiting for me, she wanted to make sure there were ROTErs at the tent to greet me when I finally finished. A HUGE HUG for you Julie! We both did it! DH, BF, her DH and my godson made their way over...got a kiss from my godson (“Eww, tastes like sweat” he says) and then said goodbye to the ROTErs before heading to the car (which by the way was located at the opposite end of the Epcot lot way past the monorail station...I must’ve looked a sight waddling all that way LOL). Finally back to the room where I rested for an hour, then showered and headed out for a great steak dinner to celebrate (cause by then I was seriously craving the protein!). Finished up the trip on Monday with a delicious ROTEr lunch at Via Napoli, then it was finally time to head home.

All in all an AMAZING weekend, accomplishing something I never dreamed I’d ever do...what, me-run? You’re joking right? Nope, I’m not just a runner-I’m a marathoner. Yes, me. And to all of the Running of the Ears friends who were cheering me on, you are the most fantastic group of friends anyone could wish for! I would have never made it without all of you...the support you have given and continue to give has made (and is still making) such a difference. Special shout-outs to Colleen, Dawn, Julie, Erica, Tracy and Joey...and I know I’m forgetting people but it’s all starting to fade to a dull roar, but believe me, I knew everyone was there and was profoundly grateful that you stuck it out until I passed! It may be a while before I try a full marathon again (now don’t you all start talking about Goofy, I may be a little nuts but I haven’t hit the insane mark...yet) but with this group, I’ll still be doing lots of races if for no other reason than to enjoy the ROTErs!

I know this has been long, but I just had so much I wanted to put down about this experience. Oh, and in case you were wondering? 6:59:09. 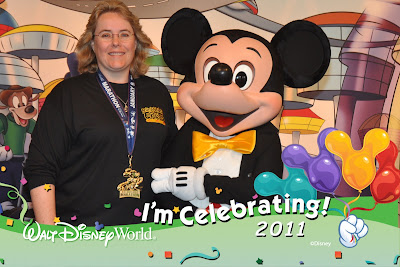