It is a standalone story within a series

Mitch Morris is a nice guy – and you know what they say about them.

They DON’T hook up.

Instead, they become friends, and slowly, more than friends. But when they both start dating other people, it’s increasingly obvious there’s something between them. Nice guys don’t cheat though, and besides, who would risk a friendship on the chance of something more?

“It doesn’t matter,” he told Dan. “We are not running Sunday —and I don’t care how many times you say Kyle McFall,” he added, sticking his fingers in his ears. “Sunday is Halloween, and that means we will both be far too hungover from Saturday’s Halloween parties to even think about running.”

“We could just not get drunk, you know. That’s a thing. That people do.”

“Not my people!” Mitch said. “Halloween Saturday is my literal favorite day of the year.”

“That’s what you said about Gay Day,” Dan said. “And about Pride. And about the day Duncan had his two-for-one special.”

“You know, I get that we’re friends, but sometimes, I really wish you didn’t pay so much attention to everything I say. You’ve got this annoying habit of throwing my own words back in my face, and it really is the most unattractive thing you do.”

“Oh, you little tiny gayby,” Mitch said. “What did they teach you back in that backwater town of yours?”

“Do you ever worry that your constant exaggerating ever builds things up to a point where people are let down?”

“Did I let you down about Pride?” Mitch asked. Dan shook his head. “Or about that two for one special?” Dan let out a laugh. “See? I never steer you wrong. Now, what are you being?”

“Do you already know what you’re doing?”

“Since July,” Mitch said. “I have to say, I’m outdoing even myself this year.”

“What are you doing then?”

“No! A magician never reveals his secrets.”

Mitch chuckled. “Oh, Dan,” he said. “Poor little gayby Dan. You are many things but you’re not a magician.”

It was a brave front that Mitch was putting on, because the truth was, he had no idea what he was going to be. He and Kent had normally done a pair of costumes, which hit a brilliant new level a few years before when they’d actually gone as a pair of pears. But this year, Kent and Dylan were doing a couples costumes, because of course they were that kind of couple, and it was probably going to be something super lame, like Romeo and Julien or some sh*t. But Mitch was idealess.

He was never idealess on Halloween. He had suggested to Ellis that they do a couples costume, which he normally hated; best friends together was fine, but boyfriends matching was just gay, and not in the good buttsex sense of the word. But Ellis was going as Black Panther.

“Why don’t you tell me what to go as?” Dan asked suddenly. “Since you’re the expert and all.”

Finishing Last is a very slow burn romance that follows Mitch and Dan in the River City Romance series.  While it’s the third book in the series, it definitely can be read as a standalone.

Mitch and Dan meet as Mitch is moving in to his new place and while at first it may seem like they’d get entangled from the start, things ease back into them starting as just friends.  They do become best friends over time with glimpses here and there of stirring feelings, but they both continue on their own romantic paths through much of the book.

This results in some emotional turmoil along the way, particularly for Dan with the relationship in which he finds himself.  It’s a long while until things change, so be prepared to read a lot of everyday life for the guys with those hints of pining along the way before the situation eventually develops into more.

If this type of long-time-coming friends to lovers tale is your jam, you’ll feel right at home with Finishing Last.  There are some great supporting characters that round things out as well, and if you haven’t already read the first two books of the series you can find some of them featured in those with their own stories (I’ll bet Kent and Dylan will pique your interest for sure!).  Finishing Last is meant for readers 18+ for adult language and sexual content.

Rob Browatzke doesn’t believe in writing what he knows – that’s why he delivers gay romance with happy endings! Equal parts sarcasm and kindness, he has been writing as long as he can remember. When not writing, he can be found actively involved in local queer nightlife, where he has made a career since the late 1900s. He lives in Edmonton Alberta, but don’t hold that against him. Feel free to stalk him on social media.

New Release-Excerpt & Giveaway: TWICE IN A LIFETIME by R.M. Neill 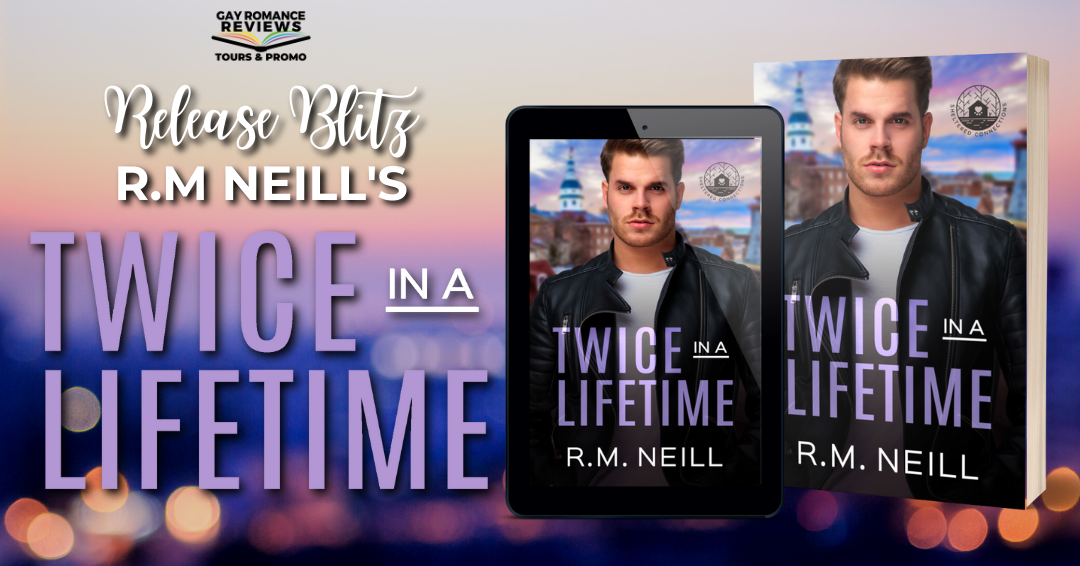 Twice In A Lifetime
By R.M. Neill

One is suffering through a fog of grief. The other crushing feelings of inadequacy. Fate knew they needed each other.

Dominic
For the longest time, I believed we get one shot at true love. A single person that sets our soul on fire. I had that with my wife until she died, then I was lost in a dark sea of grief. In need of companionship, I decided to adopt a dog.

What I found at the shelter was so much more. Micha, the volunteer, is insanely cute and ridiculously funny. He awakens feelings within me I never knew existed. Is it possible I may get a second chance at real love?

Micha
Love just isn’t in the cards for some people. And I’m among those unfortunate few destined to be alone. I trusted the wrong man with my heart once and had it shattered into a million pieces. I won’t make that mistake twice.

Instead, I pour every ounce of my energy into building my business and trying to convince myself I’m not lonely. But Dominic could be the one to tear down the walls I hide behind. He’s the most handsome man I ever met and unbelievably kind. I know he experienced a horrible loss. Is that what’s behind his attraction to me? Or has the connection between us led to his bisexual awakening?

Twice in a Lifetime is the first book in the Sheltered Connections Series. This book involves themes of hurt/comfort, bisexual awakening, and an age gap. Swoon-worthy moments, laugh-out-loud humor, and scorching chemistry make up this 70k word story. Oh, and don’t forget the cherry flavored icing.

"Listen to me Micha. Really f*cking listen, because I'm getting tired of you thinking you aren't good enough for someone. You. Are. Amazing. People love you. There's nothing about you that people don't like. Dominic is no exception. Stop f*cking hiding. Take this and run with it. Have fun with someone. If it still ends after you tried, I'll eat a pint of ice cream with you while we watch The Fox and the Hound for the zillionth time and I'll cry with you." He sucks in a breath. "But I can't stand here any longer and try to support you if you can't even see how wonderful you are."

"Wow, uh okay. I'm not really sure how to take that last part. Are you still my friend?"

Travis barrels into me, his giant hug squishing the air out of my lungs with an oomph. "Of course I'm still your friend you nincompoop. But I'm not listening to you talk bad about your self any more." He eases his grip. "Just follow your heart, Mic. He's a good one." He stabs me in the chest with his finger. "Let the hope win, just for once, okay?"

"That's the problem Trav. I don't trust my heart. It never steers me right."

He sighs, slumping his shoulders in defeat. "It's going to get it right some day. Either way, I'll be here. No matter what I say." He picks up the spilled pens. "You deserve it just as much as anyone else Micah. Love yourself like everyone else loves you." 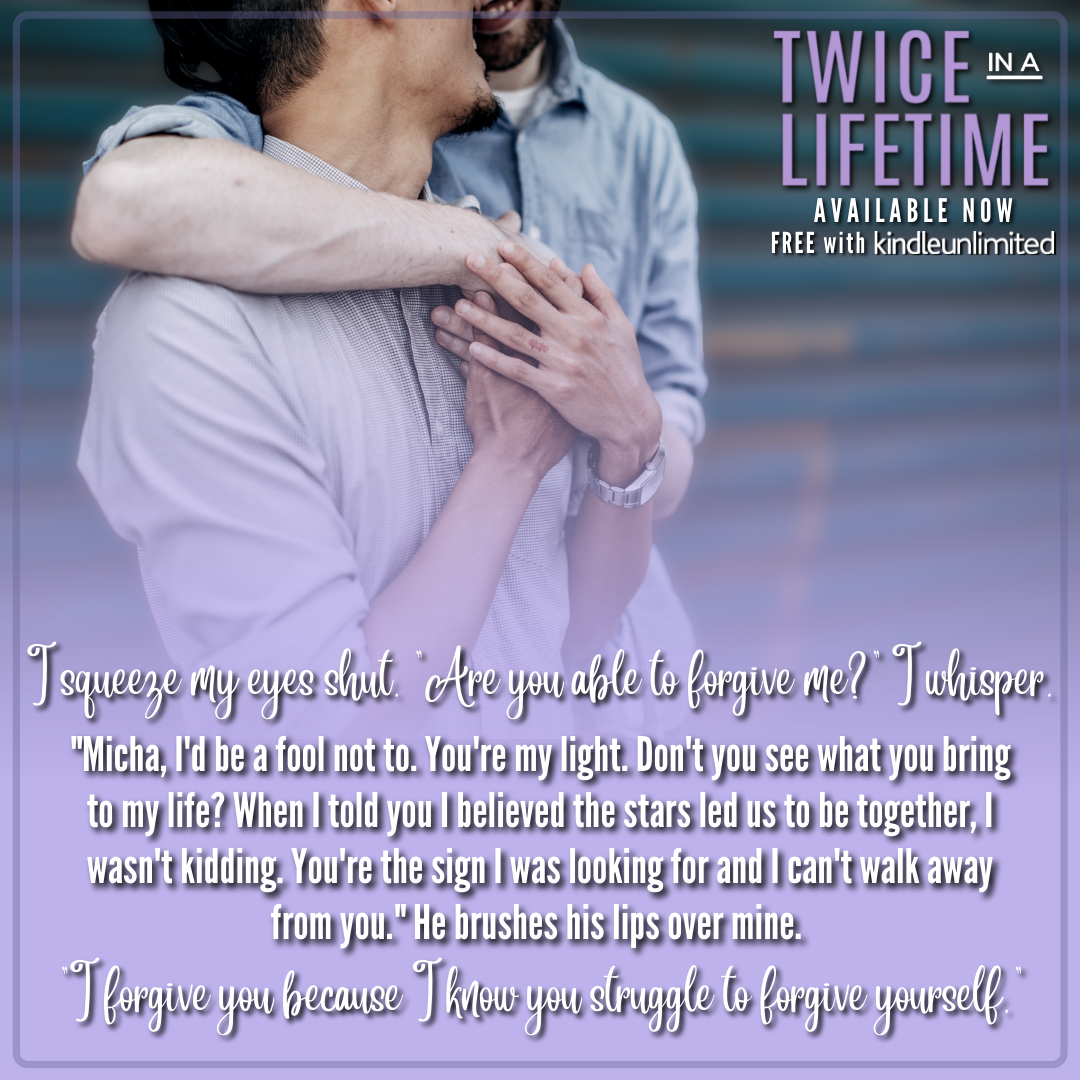 To celebrate the release of Twice In A Lifetime, R.M. is giving away a signed paperback copy (US Winner) and a $10 Amazon Voucher (International Winner)! 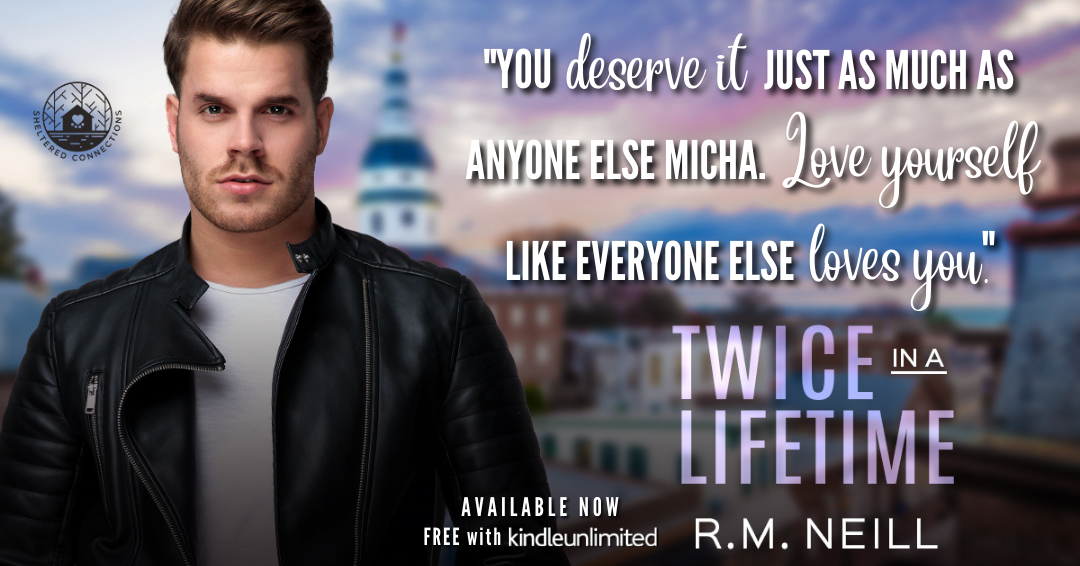 I'm a wife, mom, animal lover and a hopeless romantic.

I want my stories to make you smile, swoon and snort laugh, but not necessarily in that order.

I hope I can be the author you turn to when you need a story to make you laugh, or add light to an otherwise dark day.