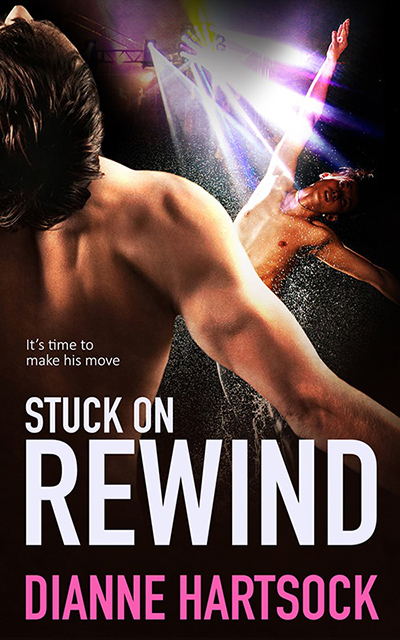 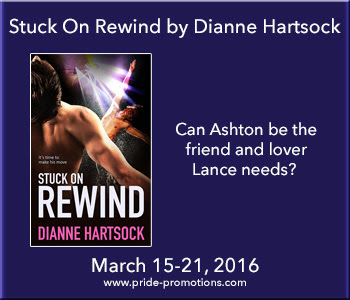 For a very short novella, Stuck on Rewind actually squeezes in a good amount of story.  It's naughty and eye-opening from the very first sentence, and stays that way until the very end.  The characters are extremely uninhibited with each other, so be advised of that before you start reading.

Even as short as it is, I still found myself attached to the characters of Ashton and Lance.  There's history between them as friends that we don't hear too much about, most of the story concentrates on what is happening right now where everything between them is coming to a head.  I liked Lance's flamboyant, unrestrained nature which was a good contrast for Ashton's more reserved personality (relatively speaking).  And there's more to Lance than meets the eye-one of the reasons I wish this was a longer story.


Excerpt (Very naughty!)
“F*ck!” Ashton shouted in a mixture of anger and ecstasy as Lance swallowed again, then let Ashton’s softening c*ck slip from between his perfect lips. Ashton leaned on his elbows, his chest heaving while he caught his breath. With a last kiss on his thigh, Lance climbed off the bed, sleek-limbed and graceful, and walked to the dresser with a sassy sway of his hips.
Ashton stared after him and groaned, not sure if he wanted to pull his friend’s ass back into his arms or punch him in the face. It would be incredible to wake up with Lance every morning and make love to him. But he sternly reminded himself that they were only friends and Lance needed to stop climbing into his bed at night uninvited.
“You do remember you have a bed of your own?” he asked, more sharply than he’d intended.
Lance gave him a smirk over his shoulder, making a show of licking the last of Ashton’s spunk off his swollen lips. “You told me to wake you at seven.”
“I didn’t mean… Oh hell.” Ashton fell back on the pillows and threw an arm over his eyes. He swore in exasperation when the mattress dipped and Lance’s familiar scent surrounded him. “Damn it—”
Soft fingers touched his mouth. “Don’t be mad, baby. I didn’t mean anything.”
Ashton peered at him through the dark curls that had flopped into his eyes. The guy looked positively forlorn, and Ashton sat up, giving him a one-armed hug. “I’m not mad. But you don’t need to keep doing that, either. You’re my friend!” He kissed Lance’s cheek, the velvet skin warm with a blush. “You make a terrific roommate, and I like the company.”
“And I like you.” Lance walked his fingers up Ashton’s leg.
Ashton laughed and shooed the hand away, but couldn’t help staring at the enticing evidence of his friend’s arousal between his legs.
“Can I take care of that for you?”
“Not at all.” Lance stood up, waving off Ashton’s offer. “I’ll deal with it in the shower. You have to save your attentions for Mister Man.”
“Who are you talking about…? Wait!” Ashton rolled off the bed and trotted after Lance as he crossed the apartment.
Lance giggled, slipping behind the bathroom door but holding it cracked open an inch. He smiled at Ashton with his pouty, kissable lips. “You know, the boss. Mister Kent.”
“I’m not saving myself for—”
Ashton blinked at the closed door. Why in the world would Lance think he was interested in his boss? Sure, the man was handsome as sin, but he was also an egomaniac and tyrant. Why only yesterday, he’d…
Hot blood scorched Ashton’s neck and face, his arm tingling where Morgan Kent had gripped it, towering over him. The man had bent to his ear, swamping Ashton’s senses with subtle cologne and a hint of sweat as he’d whispered, “If you can’t type a simple letter without mistakes, I’ll find a secretary who can.” He’d tightened his hand almost painfully on Ashton’s arm. “Or maybe I should just bend you over this desk and smack your ass for each mistake?”
Ashton’s d*ck jumped at the memory. He told it sternly to behave. “We’re not falling for that bastard. We’ll stick with the sweet boys at the club and call it good.”


Character Interview: Lance
Thank you Making it Happen for hosting me! Today, I have some questions for Lance from my book STUCK ON REWIND to answer for us.

1.  Do you have any body art? No, though I’m thinking of a silver nipple ring. Ashton mentioned it once.
2.  Do the people in your life know about your dancing at the club? Yes, I’ve never hidden my lifestyle from anyone. My family doesn’t like it, but they don’t like me anyway, so I ignore them.
3.  Do you dance full-time or part-time? Full time. It’s what I love to do the most.
4.  Do you prefer dogs or cats? Cats. They’re pretty and great company in an apartment. I have to see if Ashton will let me get one.
5.  What do you like best about yourself? I’m a nice person, and I think I’m a good friend.
6.  What do you do for fun?  I love to go out for drinks with friends, or stay home and watch a movie snuggled on the couch with Ashton.
7.  Where you considered a ‘wild child’ as a kid? I was a pain in the ass. Just ask Dad.
8.  How about in school? I was a pretty average student, I guess. I don’t know, I was more interested in the boy sitting behind me than what the teacher had to say.
9.  What’s on your bookshelf? Fantasy romance, mostly. Maybe a little scifi.
10. What’s your favorite fruit? Peaches
11. What’s the first thing you do in the morning? Crawl into bed with Ashton.
12. Morning person or night owl? Night owl. Definitely
13. What’s your favorite month of the year? Late June. The weather is perfect, not too hot or cold.
14. What superpower do you wish you had? Make sure everyone has a safe place to sleep.
15. Who do you look up to? I’ve had some amazing dance instructors.
16.   If you could have any career (other than dancing), what would it be? Being a child advocate. I’m just not sure I’m smart enough.

Meet the author:
Dianne grew up in one of the older homes in the middle of Los Angeles, a place of hardwood floors and secret closets and back staircases. A house where ghosts lurk in the basement and the faces in the paintings watch you walk up the front stairs. Rooms where you keep the closet doors closed tight at night. It’s where her love of the mysterious and wonderful came from.
Dianne now lives in the beautiful Willamette Valley of Oregon with her incredibly patient husband, who puts up with the endless hours she spends hunched over the keyboard letting her characters play. She says Oregon’s raindrops are the perfect setting in which to write. There’s something about being cooped up in the house with a fire crackling on the hearth and a cup of hot coffee warming her hands, which kindles her imagination.
Currently, Dianne works as a floral designer in a locally-owned gift shop. Which is the perfect job for her. When not writing, she can express herself through the rich colors and textures of flowers and foliage.