Release Blitz-Excerpt & Giveaway: CONFESSIONS IN THE DARK by Jeanette Grey

Confessions in the Dark
By: Jeanette Grey
Releasing March 1, 2016
Forever 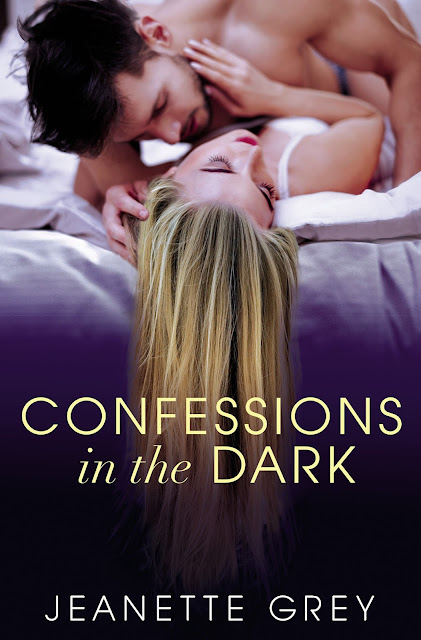 Whispers in the night lead to sweet surrender . . . but what will the dawn bring?

Anger. Guilt. Sorrow. They've strangled Cole for years-and now they've literally damaged him. With his knee out of commission, Cole knows the road to recovery will be nothing but long and irritating . . . until his beautiful and determined neighbor offers to help him in return for a favor. But soon Cole finds himself offering her so much more. Their unexpected passion lays Cole bare, body and soul. And leaves him wondering how he'll walk away before he ruins her life, too.

Gruff, secretive, and coiled with tension that begs for release, Cole is too intriguing for Serena to resist. The English accent and brooding brown eyes don't hurt, either. Their nights are beyond compare-yet the truths Cole confesses in his darkest moments reveal a heart bruised almost beyond repair. But Serena's seen the kindness and support he shows when she needs it most. Armed with a bottomless well of patience and devotion, she'll show Cole just how good it can be to let someone in . . .

One last time, she spoke his name, only for him to hurl the carton at the wall. He whirled around, and the fridge door slammed shut with a clatter, the whole thing rocking, something inside it falling over. With a crash, the eggs hit the ground, but she couldn't see them.
All she could see was this man, and the bands of control with which he was trying so damn hard to keep himself together. And failing.
His ragged inhalation was a hairline fracture to her ribs. His fist hit the front of the fridge, and then his foot, and there was another, wetter, angry sound of pain inside his lungs.
She was moving before she could think.
She stepped around the mess he'd made, right up to him. Those broad, strong shoulders still radiated distance, still told her with everything he had in him to stay away, but the hurt in his bones spoke louder.
And that was something she could never ignore.
With a hand on his arm, she tugged him around, and he resisted, clumsy with the crutches and as stubborn as the day they'd met. But she managed to get a hand on his face, to touch the stubbled line of his jaw, thumb brushing up against the corner of his mouth. He let out a sound that might have been punched out of him, and her own eyes went blurry as she pulled at him to look at her.
His gaze was glass and steel, both ready to break and impossibly hard. A skittering pang throbbed through her chest.
"I'm sorry," she said. "I'm so sorry."
For his loss and for asking. For everything.
Something in his expression cracked. This time, when she tried to draw him in, there was no resistance. One of his crutches tumbled to the ground, an arm going around her waist. He pressed his face into her hair and let out a breath against her ear, damp and shuddering, and she felt it like an ache inside her heart.
Closing her eyes, she curled her hand around the back of his neck. There was something so raw about him. Like he'd never said those words before, maybe not even to himself.
Like years had passed since he'd been held.
So she tucked him closer. Wrapped him up and took his weight. Took his confessions.
And tried to give him back all she had in return.

Jeanette Grey started out with degrees in physics and painting, which she dutifully applied to stunted careers in teaching, technical support, and advertising. When she isn't writing, Jeanette enjoys making pottery, playing board games, and spending time with her husband and her pet frog. She lives, loves, and writes in upstate New York.