We're thrilled to bring you an InkSlinger PR Exclusive Excerpt and pre-order links of Kat & Stone Bastion's exciting new adult romance HEARTBREAKER. And be sure to check out the sexy BuzzFeed article!

Only instead of Darren Cole becoming her one-night stand, he taunts her with a challenge. Then while she’s trying to best him at his own game, he turns out to be the last thing she’s prepared for: someone she wants to keep.

Which means all he can ever be…is a friend.

Darren Cole never allows a girl to get close—not close enough to matter.

Then storms in Kiki Michaelson, a beautiful, fearless temptation that rocks his world off-balance. But he fights their attraction, unwilling to gamble something physical with their close ties. Until the passionate sculptor exposes her heart and breaks his wide open.

In that moment it becomes clear: she could never be just a friend.

Sometimes what you run from…is exactly what you need.

I watched his prone body lower, then lift.

My breath caught and my stride slowed as I drew closer. My mouth gradually fell open. My eyes widened.

Shirtless, baseball hat spun backward, hands sunk into silver metal pails of sand, he performed the most unique pushups I’d ever seen. His skin glistened with a sheen of perspiration under the section’s brighter lights. Taut muscles along his back, shoulders, and arms flexed under the strain of every measured drop and rise.

The world around me seemed to stop—except for him. Art in motion. Beauty in action. Every woman’s fantasy-come-to-life coalesced into one surreal moment where my mind fabricated my body beneath that incredible male form, under all that raw muscle and energy.

On the next downstroke, he paused. Then he glanced up. His gaze locked with mine.

Yet powerless to stop myself, I studied the rigid contours of muscle as he held that position. The artist in me flared to life, imagining those lines sketched in charcoal. His tattoo. My gaze lingered on three thick curving tribal-style crescents. The largest began at the base of his neck, where its tip fanned into multiple points. Two smaller crescents overlapped tips with the first, each arcing a different direction, one toward his back, the other curving beneath his arm.

My skin began to heat under the spotlight of his attention, and I burned the image into my memory for when I had a quiet moment, later.

My mouth had gone dry.

Then I found my voice as my brain cells finally began to fire again. “Really? You invite me here and do that” —I gestured toward him with a wild wave of my fingers— “and I’m supposed to think only friendly thoughts?”

His lips twisted into a smirk. “Try.”

I forced my attention back to his face and held his stare. “All I see is sex on a stick.”

Oh, sh*t. I blurted that out loud.

His knees lowered to the floor, then he pulled his hands from the sand. “Try harder.” 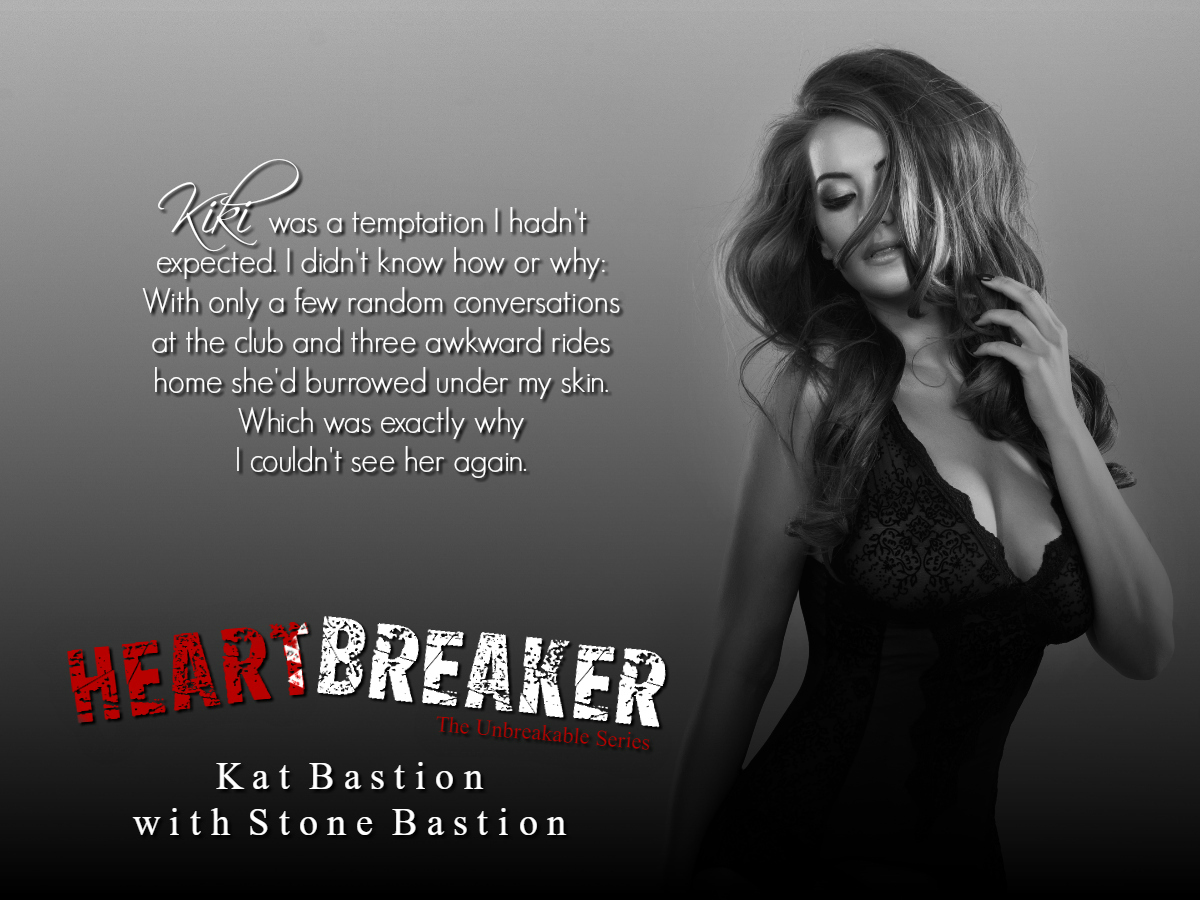 Check Out the Fun BuzzFeed Article...
10 Best Drag Rhythm Songs for Sex:A Playlist for Every Heartbreaker

Have You Joined Their Email Notification List?
Keep informed of new releases by signing up:
Kat & Stone Bastion's Email Subscription
One lucky subscriber wins an eBook of their choice from the backlist AND a $10 Amazon or Barnes and Noble Gift Card with each announcement.

Kat and Stone Bastion’s bestselling first novel No Weddings and the No Weddings series were named Best of 2014 by multiple romance review blogs.

When not defining love and redemption through scribed words, they enjoy spending their time mountain biking and hiking in the beautiful Sonoran Desert of Arizona.


Stay in touch with them on their social media pages...