Deputy United States Marshal Mitch Knox apprehends fugitives for a living. His calm, cool, collected attitude and devastatingly handsome good looks earn him a well-deserved bad boy reputation, both in the field and out. While away on an assignment, he blows off some steam at a notorious Dallas nightclub. Solving the case that has plagued him for months takes a sudden backseat to finding out all there is to know about the gorgeous, shy blond sitting alone at the bar.

Texas State Trooper Cody Turner is moving up the ranks, well on his way to his dream of being a Texas Ranger. While on a two-week mandatory vacation, he plans to relax and help out on his family’s farm. Mitch is the last distraction Cody needs, but the tatted up temptation that walks into the bar and steals his baseball cap is too hard to ignore.

As Mitch’s case gains nationwide attention, how will he convince the sexy state trooper that giving him a chance won’t jeopardize his life’s plan...especially when the evil he’s tracking brings the hate directly to his doorstep, threatening more than just their careers.

Full Disclosure by Kindle Alexander from Becca the Bibliophile on Vimeo. 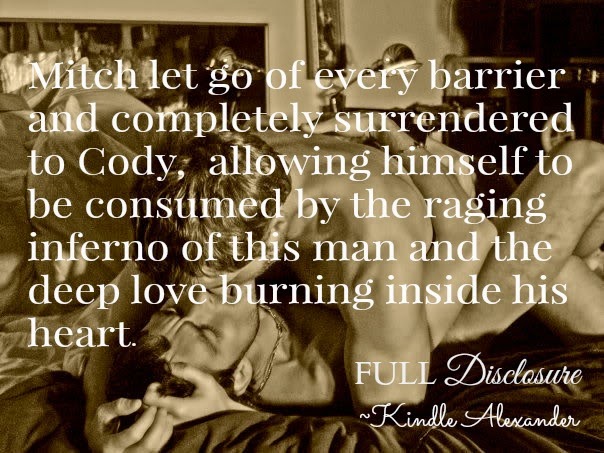 I live in the suburbs of Dallas where it's true, the only thing bigger than an over active imagination, may be women's hair!

Usually, I try for funny. Humor is a major part of my life - I love to laugh, and it seems to be the thing I do in most situations - regardless of the situation, but jokes are a tricky deal... I don't want to offend anyone and jokes tend to offend. So instead I'm going to tell you about Kindle.

When I read the first book in the Nice Guys series, Double Full, I thought, "Damn, this author can sure write one hell of a love story!"  Now after finishing Full Disclosure, that thought popped right back into my head along with "and some awesome suspense too!"  Because not only are you going to get a story of finally finding "the one", you've got an awesome, engrossing, edge of your seat plot as the series goes even deeper into the mystery of the case that started in Double Full.

Mitch's strong, very "out" personality makes him fun and very likable, and Cody's more reserved, more quietly "out" one makes him the perfect complement.  Put the two of them together and you don't just get sparks-you get an explosion, so sit back and get yourself ready for some hellacious fireworks!

We also get some great, quick scenes with Jace and Colt, our guys from Double Full.  The two of them are so much fun, and it was so great to get to see more of them in this story.  And speaking of this story-the plot gets even more detailed into the unsettling case that Mitch is now working on...so in addition to the fantastic story of Mitch pursuing Cody (and Cody trying so hard to resist, and thankfully failing miserably), there's intrigue and danger woven in as Mitch and his team get closer to discovering who is behind the attacks in his case.

That's one thing you'll see a lot more of in this installment-scenes regarding the case and where the investigation is going.  Don't let the large amount of time that is devoted to these scenes deter you from this book-believe me, the entire story is well worth it--plus the case plays an important role in this whole series, it's not just filler to get you from one steamy scene to the next.

A riveting story of the pursuit of love and happiness, the darker side of those with no tolerance, plus you'll get those hot and sexy scenes of Mitch and Cody together...put all that together and you get 5 freakin' fantastic stars!