First off, I have to say I LOVED this event. Yes, it’s just a 5K (and one that cost $95 to boot!) but the theming, obstacles and scavenger hunt turned the “just a 5K” into a really fun event that I’ll definitely be going back for again.

I left Friday morning before the sun came up (trying to miss all those icky lovebugs that like to get smushed all over the car this time of year) and so I arrived early enough to check in to my room and grab a snack before heading over to packet pickup when it opened. No fancy expo...even the outdoor tents they had set up had to be taken down as a storm was rolling in so they moved the tables into the stadium breezeways at the ESPN Wide World of Sports complex. There was a big board set up before you went inside where you could check for your bib #...now, I knew I was going to be in wave 1 since I was doing the race as an individual and we got to start before the teams...but I didn’t know I’d be bib #95. My number was even lower than my (MUCH) faster ROTE friends that were there...so I got a kick out of that, ‘cause you know for a normal Disney race with normal corrals I’m never going to have that low of a number-let alone be in the first wave of runners LOL. Pickup was quick and after I went back to my room for a nap while the storm passed, then met a ROTEr over a Epcot to wander around and watch Illuminations (thanks Dan!).

Saturday I decided to sleep in, then had a leisurely breakfast before heading to the pool for a couple of hours of relaxation. Met up with Dan and Tricia (with her cute twin sons) for a late lunch/early dinner over at Rainforest Cafe at Animal Kingdom. Afterward, Dan and I headed over to the race staging area to hang out and look out for other ROTErs. We finally found Megan who was there with her family and then Steve. Eventually it was time to line up so we headed for the front of the corral where I took a picture of the start sign with the “wave 1” sign for posterity (HA!). In the corral we met Monica, then Dan left us to move up closer to the front-since ya know he was going to be a heck of a lot faster ;-) and then we were off. And I of course went out too fast and had to walk a bit more than I wanted to during the first mile. Our first obstacle were lines of hay bales (maybe 3 or 4 sets) that we had to jump over like hurdles. I must have looked a sight doing that as I could feel my legs flying out to the sides as I jumped. At least the pic they got of me during that part looked mostly normal. 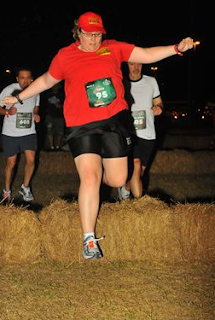 We went back through the park and out through a backstage area to a turnaround point after which came our second obstacle-rows of tires on the ground (again 3 or 4 rows) that we had to navigate through (though some people were just hurdling over them like the hay bales). Made it through, saw only one person fall. Back in the park for a bit, then backstage to our way back out where the last obstacle was. For the last one, we had a choice--go up and over one of those rope net tent-shaped climbing things, crawl under a rope net that was about a foot above the ground...or you could go around both. I was not about to do the crawl one-it was through a ton of loose dirt and I could see the kids that were doing it were coming out filthy (no thanks, that’ll be me if I ever agree to a mud run). I was going to do the climb one, but it was filled with people and I would have had to wait to take a turn...and so I just went around...which was hard to run through since it was all loose dirt too so I just walked as fast as I could through it. Right after that was the finish to the 5K portion.

As we finished through there were volunteers handing out our first clue, a small flashlight and mini-marker to write our answers on the clue cards. On the cards was listed the location where we were to show our answers, so since mine said Oasis-Palms, I headed for The Oasis which is the first set of animals after you get in the park. But I couldn’t find where to go. After wasting about 15-20 minutes going back and forth between the entrance and almost to the big tree, I found out the station was BEFORE you went in the park. Nice. So I went back out, found my area, and tried to figure out my clue...finally got it with some help from the volunteer who then gave me my next clue. 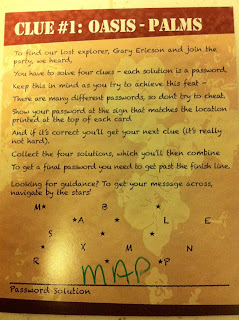 Off to Camp Minnie-Mickey I went...with another really hard clue that I couldn’t figure out how to start...turned out to be a substitution code to figure out the answer (again got help from the volunteer). 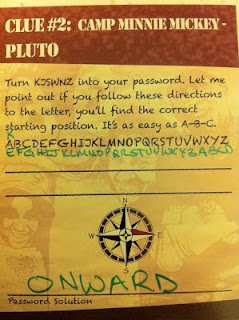 Got my next card which sent me to Africa...easy clue this time, just elongated letters and had to figure out what the word said. 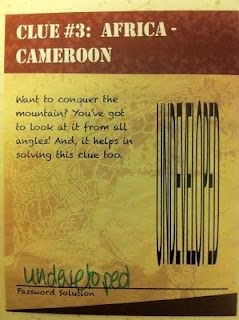 Quickly got my next clue and ran all the way to Asia with it, another really easy one. 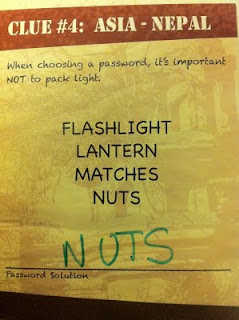 Got my final clue which stumped me at first but with a little hint from a volunteer (who was enthusiastically going from person to person trying to help as many people out as he could) got it done and raced over to the finish. 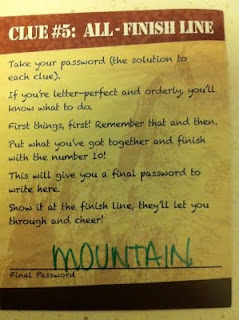 After navigating the medal line (crush of people, not enough space for the crowds that were coming through at the same time I was) and getting snacks (Powerade, bananas, Clif bars and huge liter-sized bottles of water), met up with Steve and we walked over to Dinoland USA where we met up with Dan and eventually Becky. Found out that Becky finished second in the individual female category and Dan finished fourth for individual males---Congratulations!! Got a picture with Mickey and Minnie-line moved pretty quickly, only had to wait maybe five minutes, then we headed over to ride Expedition Everest (WAY cool to ride in the dark!). After that I was pretty tired so headed back to my room. 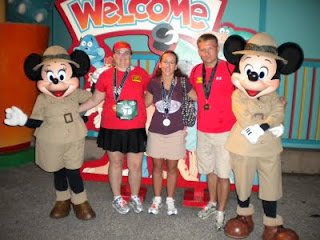 I was not last...I finished 183 out of 193 for the individual female women. Would have been a lot better if I’d known where to go to turn in that first clue. My 5K time was 47:17, about average for me right now for a 5K but considering there were obstacles as well, even better I guess (I’m actually better on pace for longer races, go figure) and my scavenger hunt time was 53:30 for a total of 1:40:46. Which I’m fine with since this was my first time and I wasn’t sure how everything would be set up. Now I know to keep an eye out for clue stations right away and not assume they’ll all be in the park itself (*kicking myself for that one*) and I have a better idea of what to expect...because I will certainly be returning to do this again, whether by myself or teamed up with someone. I really enjoyed this event and would definitely recommend it to others. Plus getting to hang out in Animal Kingdom after dark when the park normally closes around sunset was a nice perk.