New Release - Review: HE SEES YOU WHEN YOU'RE SLEEPING by Sara Dobie Bauer 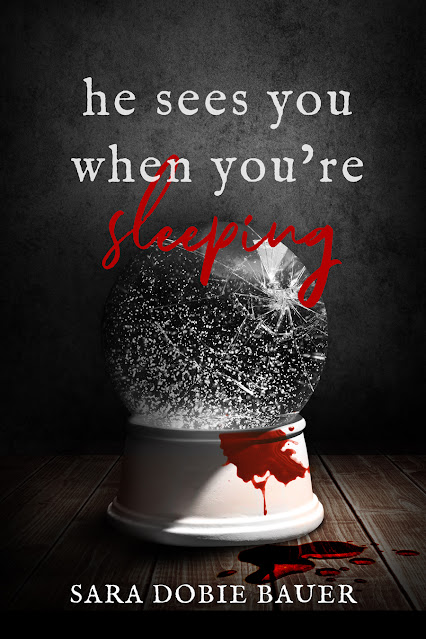 HE SEES YOU WHEN YOU'RE SLEEPING

We met when you were just a child, but you’re a man now and need my protection.

With Christmas Eve approaching, I’ll watch over you.
Whether you know it or not.

Because no one is allowed to hurt you.
No one but me.

At 20K words, He Sees You When You’re Sleeping is a twisted take on Santa, featuring M/M romance, horror, and the holiday season.

Add to your Goodreads TBR shelf

This is one of the most unique holiday stories I’ve ever read; just be advised that it’s a darker take on the Father Christmas/Santa Claus myth.  That said, I was so totally absorbed in this story and definitely wasn’t expecting the plot twist near the end.  Even with this being on the darker side, it still brought out my tears.

When the story begins, Kris really doesn’t know anything other than what he must do every Christmas Eve.  He seems unemotional and mostly apathetic, though understanding of his role as a protector of children…until Jack enters the picture and changes everything.  That’s when the really interesting events begin.

The prevailing atmosphere is gloom, but within that there is still hope—due in large part to Jack.  He is a beacon of it for those less fortunate and hurting, but also for Kris.  Expect an exceptionally non-traditional take on Father Christmas, along with redemption, self-realization, and eventually atonement.  There is so much more I want to say about this story and the characters of Kris and Jack, but I think anything else I want to say might give away too much.

What I can say is that this is the most intriguing book I’ve read this year.  5 stars and a Top Recommendation from me for He Sees You When You’re Sleeping.  This book is meant for readers 18+ for adult language, sexual content, violence, and a scene of self-harm/suicide attempt.  Told ya it’s a darker one…but it’s a GOOD one.  I doubt you’ll look at Santa Claus the same ever again. Heart of the Holidays

Everyone hopes his road to happily ever after will be carefree and smooth, but too often hair-pin turns and detours seem to get in the way.

Having thought he was on the road to forever before, former Silicon Valley programmer Dan Lassiter is leery about pedaling down it again. His elderly companion Charlie urges him to get to know Rick Reardon whose bakery is across the street from Dan’s bicycle shop.

Under the watchful eye of Charlie, Dan and Rick take tentative steps towards each other, all the while trying to avoid potholes such as exes, homophobes, and family problems.

As summer turns to fall and then winter, they hope that the road will be smooth going from their first date and first kiss to having what Rick’s sister euphemistically calls their “sleep overs”. At each step, though, they are tripped up and wonder why there seem to be so many bumps in their road.

Maybe Dan and Rick should heed some of Charlie’s sage advice or maybe they should listen to their hearts instead of the warnings from their pasts. The kids and their mom arrived after lunch, right about the time Charlie usually turned in for a nap. He gave them the once over as they got out of the car, nodded to me with raised eyebrows, and ambled back toward the house. I guess he figured he’d meet them sometime, probably sooner rather than later, so he didn’t have to knock himself out now. It was the siesta part of his day.

After the kids tumbled from the car and jumped on Rick, he pointed at my open garage and waved at me. I waved back, and they galloped across the street.

“Hi, I’m McKinsey! You can call me Mack.” The red-haired boy danced in front of me. His hair blazed in the sun and was as bright as his green eyes and freckles. He didn’t look anything like his uncle. “So these are all the bikes I can ride? Can I try them out first?”

“Yeah, but don’t go very far. I’ve got an app keeping an eye on them.”

He didn’t wait for me to explain further, but ran toward the racks so fast that I thought he would barrel into them. A small hand on my arm stopped me from chasing after him.

“Don’t worry. He’s careful. He won’t hurt the bikes. We won’t go far because of mom.” Since I wasn’t worried about the bicycles, I looked down into brown eyes, a solemn face, and curly sable hair. “I’m Leslie. Everyone calls me Lee. My brother throws himself into his activities. I don’t. Can we choose any of the bicycles?”

I glanced up at their uncle who shrugged at me. The small hand let go of my arm, so I looked down at Lee again.

“Yes. You have three choices. One, you can select a bike and ride it the entire time you’re here. Two, you could come back to the garage and pick another one to ride for the day, the half-day, the hour, or however long you want it. That means if you wanted, you could ride every bike in this place in one day. Or your third choice, you could stay at the bakery and not go bike riding at all.” I winked at her. “I would choose the bakery except then I’d look like a human lead balloon if I did.”

She giggled and put her hand on my arm again.

“I like you, Mr. Dan. I think we’ll get along fine.” She nodded and gave me a long assessing once over. “Don’t worry. You don’t look like a balloon at all. Not at all.”

If she’d been in her teens, I would have thought she was flirting. But Lee seemed as if she was merely making an observation.

I liked both kids and their approaches to life. I’d be willing to bet Charlie would like them too when he got up from his nap and met them.

Unlike her brother, Lee sauntered over to the bikes, many of which were now askew thanks to Mack’s unsorting process. She carefully started to right those tossed aside. She stopped at a turquoise bicycle, hopped on, and waved to me and her uncle as she sped away. Her brother was long gone. The bike rack still needed straightening which would give me something to do while Charlie snoozed.

I started toward it. Rick had surged across the street and was striding up to me.

“Here. I’ll help.” He stood staring down at the mishmash of bikes. “If you show me how to untangle them without making things worse."

“I don’t get it. Aren’t you afraid people will just take off with your bikes and you’ll never see them again?”

I watched him bend over to pick up one on the ground. My groin tightened at the sight. We were going out to dinner. Together. Soon. My heart and d*ck lifted as my mind piled up image after image of dinner and afterward. It was about time for me to get back in the saddle as it were.

If you're looking for a relatively angst-free read with a touch of family drama, you'll find that here in Heart of the Holidays. Dan and Rick's relationship develops slowly in terms of time, if not pages. There's really no obstacles for them being together, and the bit of drama to be found comes from an ex and Rick's parents.

You do get more than one holiday in this story since the book covers from summertime through the New Year, with each holiday having it's own bit of drama along the way.

This is a pretty quick read, and I was able to finish in a couple of hours. While the writing style is not quite to my taste, I was actually glad there wasn't any real craziness on the way to these two finding their HEA. Pat Henshaw, born and raised in Nebraska, has lived on the U S's three coasts, in Texas, Virginia, and now California.

Before she retired, she held a number of jobs, including theatrical costumer, newspaper features reporter and movie reviewer, librarian, junior college English instructor, and publicist.

She also loves to travel and has visited Canada, Mexico, Europe, Egypt, Thailand, and Central America as well as almost all fifty US states.

Now retired, she enjoys reading and writing as well as visiting her older daughter, son-in-law, and grandchildren on the East Coast and playing havoc with her younger daughter's life in NorCal.

She thanks you for reading her books and wants you to remember that every day is a good day for romance.

Pat is giving away two $10 JMS Books gift cards with this tour. Enter via Rafflecopter: