So this should be subtitled “the race report I never wanted to write”.  That may clue you in to where this is headed, but I’ll tell you everything anyway.

I set out early Friday morning to drive up to WDW so I could be at the expo when it opened.  The packet pickup and expo went like most all other WDW ones and I got through pretty quickly.  The only real difference was the expo size-it was much smaller than what you’d see during Marathon Weekend (where every millimeter of floor space is used to its fullest) which is what I’d expected. We got a cool tech shirt that glows in the dark and as I was expecting with the corral assignments made public beforehand, my bib # put me in the last corral (D).  I was a little disappointed about that since the only Disney race I’ve been in the last corral for was my very first one, but considering the shorter distance and only 4 regular corrals I guess I knew it was going to be like that. 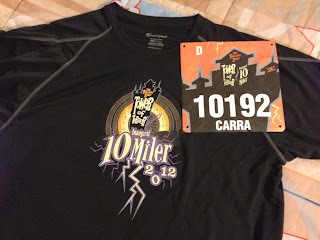 I rested up Friday afternoon since I went to Mickey’s Not So Scary Halloween Party that night (LOVE the Halloween Party!).  I honestly can’t remember what I did on Saturday before getting ready to head to the race.  I ate a late lunch/early dinner, nothing different than what I’ve had for my other night races.  I was a bit concerned about the weather.  Not rain, but the humidity since the forecast was trending high.  We went to the start area early and met up with a bunch of the ROTErs and hung around chatting. 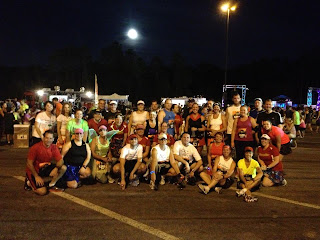 Once it was time to start heading to the corrals I tried to make my way to the front of D, but there were SO many people it made it pretty hard.  I was finally able to get almost all the way to the front-I wanted as much room between me and the last person starting as possible.  Finally it was corral D’s turn to set off.  I was already sweating from standing in the huge mass of people...it didn’t help that it was still 80 degrees with 80% humidity (yes, you read that right).

I started off fine, walking a bit more than I normally would but still keeping my pace where it needed to be for Disney’s standards.  The first part of the course was an out-and-back down Osceola Parkway which was neat since you got to see the runners on the other side going the opposite direction and could shout out to each other when you saw someone you knew (or just random strangers if you really felt like it LOL).

Now, like I said I was keeping pace--so when the balloon girls (the Disney pacers who start after the last person crosses the start line and keep the 16 minute mile pace) had caught up to me by mile 3, I was wondering what the heck??  One of them I remembered from Princess, and it seemed they were doing the same thing I saw at Princess--once they would get to a mile marker they would stop for a bit since it seemed they were actually ahead of pace so they needed to pause to let the clock catch up to them.  So I was kind of concerned...especially when I really started to feel the humidity after mile 4.

Yes, I train in the heat and humidity since I live down here in SoFla where 80+ degrees and 80% or even 90% humidity is a regular thing (and it was like that throughout ToT training too).  But that night, it felt so much worse and actually made it hard to breathe properly when running-I felt like I couldn’t catch my breath...and so after mile 4 I was down to walking.  And after mile 4 I couldn’t see the balloon girls anymore.  But I wasn’t giving up.  I was going to keep going as fast as I could, period.  I was hydrating properly (and had for the days leading up to the race too) but the humidity was just so draining physically and it was making me feel a bit nauseated.

I think it was just after I hit mile 5 that the turn into Wide World of Sports came and we were on a dirt road for a while--which I hated.  I kept watching the ground, worried I was going to step wrong on a rock or something.  And that’s when I really started feeling the chafing from the huge amount of sweat making everything I was wearing wet (and in places you never want to chafe.  Don’t ask.).  But I kept going.  Through the stadium (which honestly didn’t wow me) and around the track, then back out to the WWoS exit.  As I was getting slower and slower-down to an 18 minute, then 19 minute mile there were fewer and fewer runners (well, walkers by then) all the way at the back.  But there were still people behind me...though many were starting to take the option of climbing into the extra-long golf cart that was trundling along at the back.

I refused to stop.  Once out of WWoS and back on the road, I knew I wouldn’t be finishing.  Just after the 7 mile point, one of the big charter buses was sitting right on the course (they normally position them off to the side on a side road or an off-ramp) along with one of the police cars positioned in such a way as to say “your race ends here”.  A man with a clipboard was waiting by the front of the bus to tell us that unfortunately, we’d have to stop there as they had to get the roads opened back up (um, for who?  It was right at midnight by then and we were only 3...miles...away...from...finishing).  There were several people who started to cry once they reached that point (and yes, I felt like it but held it back) and one guy who embraced his girlfriend/wife/SO to console her when they were stopped and her tears started to fall.

This is the first time I have ever been swept in any race.  I may have seen the bicycle people with their little orange flags and been passed or played leapfrog with the balloon girls before...but I was never swept.  Until now.

As we were ushered onto the bus, a runDisney person had a clipboard that she wrote our first name and bib numbers on as we boarded.  We were offered water and Powerade so I grabbed a bottle of water but just the thought of drinking the Powerade made my stomach do flips since that nauseous feeling was still happening.  I dropped into a seat and felt so tired and worn out--so horribly worse than I felt after doing the Disney full back in 2011 and the back-to-back days of halfs when I did the half marathon and marathon relay back in January 2012.  I didn’t want to move from my seat.  The runDisney person climbed on board the bus with us once the last person had been loaded.  She tried to be perky and smiling, saying we did a great job but we all knew she was just trying to cheer us up.  It didn’t work.

The bus dropped us near where the finish chute let out (I know it was after the finish line   since the runners coming by already had their medals).  We walked through a tent where we were handed a bottle of water and what I thought at the time was some food.  I wasn’t paying attention to what they were giving me since my stomach wasn’t very happy and I was looking around for anyone I knew and the way out, just trying to keep moving forward.  It wasn’t until after I was past the tent and trying to juggle what was in my hands that I realized the girl at the tent had handed me a medal, not some snack.

I know all the controversy there is surrounding medals for those who didn’t finish.  By the time I saw what I had, I was too far down to go back (I just felt awful and wanted to get where I was going and just be done)...so I just wrapped it up and zipped it away in my pocket.  I wasn’t about to hang it around my neck.

I saw Kimberly from ROTE and congratulated her, admitting that I was actually swept.  Actually saying that was so strange.  (It was great to see a familiar, friendly face after that, thanks for your kind words Kimberly!)

I finally made it out of the backstage area and into Hollywood Studios.  I texted my SIL and went to the Indiana Jones show area to pick up the bag I had checked.  Waiting in that line, going down the steps to the stage area and then back up the steps to get out I could feel the waves of nausea wanting to overcome me.  But I held on.  Once out I met up with my SIL and her friends (one was worse off than me).  I was craving some kind of soda, and made do with a bottle of Coke from one of the carts.  It actually made my stomach feel better when I drank it (and the burping helped too).  I still felt crummy so headed back to the hotel for the night.  I wasn’t in the mood for celebrating.

One thing was upsetting to me.  There was a large stretch of the course that was comprised of the out-and-back.  I actually saw several people cut from my side over to the other side, totally cutting out the WWoS section of the course.  At some of the points I saw people cut over well before WWoS, some cut from 2-2.5 miles off their course.  That just pissed me off.  Here I was, pushing as hard as I could given the conditions, not stopping until I was made to do so, covering every mile of the course as it was laid out.  Sure, I could have cut across--and though the thought of it was tempting once I hit that mile before WWoS, I have never cheated in a race and wasn’t about to start, even if I knew it might mean getting swept.  There were some people around me asking each other, “are they really cutting across?” and saying, “that’s just not right”.  Uh-huh, yeah.

Anyway.  Oddly enough (or maybe it was just a sign, or my body telling me something, or whatever), in the weeks leading up to the race and especially the day of and our waiting time right before the race started, I just had this “feeling”.  It was kind of a nervous butterfly feeling, you know?  It just felt wrong.  Even on days where my training was going great and I was excited for the cool new medal...I felt “fluttery”.  I don’t know.

And so that’s my report.  The one I never wanted to have to write.  And I never want to write another one like it again.

Oh, and the medal?  I’ve never put it around my neck.  It’s not on my rack...and I'm not posting a picture of it.  And now I’ve got a sticker on it that says “DNF, 7.12 miles”.  It’s just sitting on a shelf.  It will never hang on my rack, but it is a reminder for me...and motivation to never let it happen again.  And yes, I’ll be back to try again...the whole redemption thing, right?