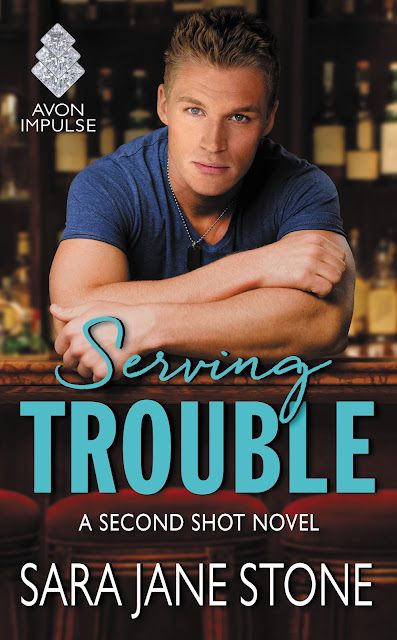 Five years ago, Josie Fairmore left timber country in search of a bright future. Now she’s back home with a mountain of debt and reeling from a loss that haunts her. Desperate for a job, she turns to the one man she wishes she could avoid. The man who rocked her world one wild night and then walked right out of it.

Former Marine Noah Tager is managing his dad’s bar and holding tight to the feeling that his time overseas led to failure. The members of his small town think he’s a war hero, but after everything he’s witnessed, Noah doesn’t want a pat on the back. The only thing he desires is a second chance with his best friend’s little sister.

Josie’s determined to hold onto her heart and not repeat her mistakes, but when danger arrives on Noah’s doorstep and takes aim at Josie, they just might discover that sometimes love is worth the risk.

After reading the prequel novella, Running Wild, I was ready to dive right in to Serving Trouble to see where Josie and Noah's story would pick up several years later.  Here in this story, they both start off extremely guarded around each other, reluctant and wary.  But Josie needs Noah's help and despite his reluctance he still can't keep himself from helping her out.

There's some good supporting characters-unbalanced Caroline, sweet and supportive Josh, Josie's father and her brother Dominic (even though we don't see a lot of them).  The author does a good job of setting up situations with these characters to ensure a solid foundation for future books in the series.

There's plenty of sexual tension in the story-eventually spilling over of course-then to add to that there are outside factors to add drama and complicate Josie and Noah's relationship.  There's one particular plot arc that creates the bulk of the drama (the "danger" mentioned in the blurb), and the suspense from this continually builds throughout the story, and doesn't necessarily lead to the outcome you'd expect.  For me, the resolution actually felt a bit anti-climactic compared to the buildup that leads to the bit confrontational scene.

The writing is very good, and the story did keep my attention the whole way through, even if the conclusion felt a bit calm compared to suspense that had built up.  This was a 3.5-star read for me, and I'm intrigued to see where the series heads from here.  Recommended for romance fans 18+ for adult language and sexual content.

After several years on the other side of the publishing industry, Sara Jane Stone bid goodbye to her sales career to pursue her dream-writing romance novels. Sara Jane currently resides in Brooklyn, New York with her very supportive real-life hero, two lively young children and a lazy Burmese cat. Join Sara Jane’s newsletter to receive new release information, news about contests, giveaways, and more! Visit www.sarajanestone.com and look for her newsletter entry form.

Rafflecopter Giveaway (Two (2) full print sets of Sara Jane Stone’s previous series “Independence Falls” to include FULL EXPOSURE, CAUGHT IN THE ACT, HERO BY NIGHT and WILD WITH YOU)