Cut to the Chase
Dangerous Love #2
By: Elle Keating
Releasing March 8, 2016
Forever Yours 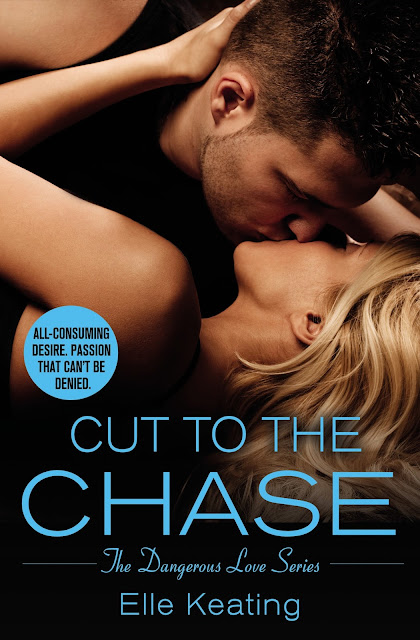 When Erin Whitley is alone with Chase Montclair, high above the city in his glittering penthouse, she sees a side of the legendary businessman no one ever sees.
As powerful and commanding in the bedroom as he is in the boardroom, Chase can melt her with a word and thrill her with a touch. But when he bares his soul and tells her he loves her, Erin fears a dark secret from her past will destroy everything.

Chase vows to protect Erin at any cost. Every night, he takes her in his arms and unleashes her wildest inhibitions. Every day, he wakes her with kisses and promises her more. But the deeper they fall in love, the closer the danger gets.

If Erin wants to be freed her from her past, she will have to trust Chase with her life. And if Chase wants to be with Erin forever, he must risk losing her first.

*Naughty Excerpt*
Chase Montclair stared out the window at the world below and prayed that the evil that yearned to infiltrate their lives would just disappear.  But it would take more than prayer to lure the sick son-of-a-bitch out of the hole he had successfully hidden in for the past year.  Erin and her brother had been on the defense too long.  It was time they took action and put an end to the madness.
Chase walked over to the bed and looked down at the sleeping woman, the woman he was determined to make his in every sense of the word.  He pulled back the covers and slipped in behind her.  As if by instinct, she nestled in closer, pulling his arm around her, though she was still peacefully asleep.  The valiant part of him told him to let her rest.  But as he held her naked body close, breathing in the scent of her hair and feeling her soft curves shift beside him, all he could think about was having her all over again.
He rolled her onto her back and gazed at her perfect body against pure white sheets.  His breathing hitched as he envisioned her in white, walking toward him, smiling only at him and because of him.  Soon, he thought.  Erin Whitley would be his wife.
Chase pulled back the sheet, exposing her breasts that seemed to heed his attention.  She began to stir, which was a relief, since his c*ck throbbed and longed to be deep inside her heat.  Not yet.  He wanted to hear her.  Nothing pleased him more than when she screamed with pleasure.  He gently spread her legs and took in the glorious sight.  She was beautiful…and wet.  Even in her sleep, she was ready for him.  He licked his lips and knelt down so his face was only millimeters from her tight, glistening nub.  Chase inhaled her scent, which made him mad with desire.  He suppressed a groan, as he enjoyed the erotic silence, and licked at her cl*t.  He felt her bottom buck into his hands and her fingers grabbed his hair in apparent need.   With his tongue circling her cl*t, he looked up and she met his gaze.  Though she had been asleep just moments ago, her eyes were crazed and it was clear that she was going to come very soon.
“Oh God!” she whimpered

Elle Keating was born and raised in South Jersey, where she lives with her husband and three children. It was during her long commute to work, crossing over the Betsy Ross Bridge into Pennsylvania, her mind drifted. Images of a world with Chase, Erin and their friends came rapidly and sent her writing to bring these intense characters to life.
When Elle is not in her favorite coffeehouse, huddled in a corner on an oversized chair and working on the next book in the series, she enjoys being mom, taking her children from one sport to the next, and challenging herself frequently to be in two places at once.
Website | Facebook | Twitter | GoodReads