The moment you get all you ever wanted.

Pro-snowboarder, Reef Reid, has it all, except the one thing he desperately wants: the girl, the white picket fence and the happily ever after. At the peak of his career, he turns his back on the upcoming season and flies to a tropical island paradise to defrost.

At least that’s where he was supposed to go.

A ticketing mishap has him ending up in Queenstown, New Zealand, famous for its idyllic ski resorts.

Stratford ‘Ford’ Wallace understands attraction to the opposite sex. He’s a true playboy at heart after all; a genuine love ‘em and leave ‘em type. But all that is flipped on its head when the enigmatic Reef Reid literally drops out of the sky.

When a whiteout trapped them together on a mountaintop neither expected the explosive attraction that would spark between them. They’re unable to resist each other, but will they give into temptation? Or will the avalanche that tears through the mountain end them? 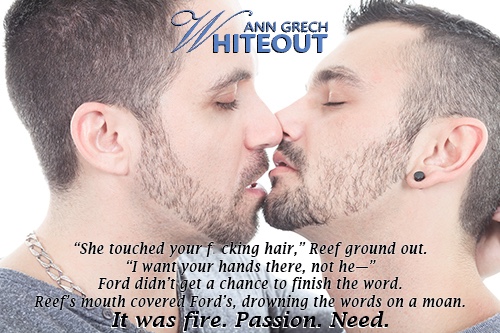 Get ready for an avalanche of emotions to hit you, HARD!! ~ Booklover

Reef pulled his goggles down over his helmet and picked up his snowboard, trudging further up the slope as they both tried to get through to base on their helmet-mounted radios again. “Nada. Still.” They’d been trying for two hours, hiking steadily up the slope away from the cabin. Dread curled in Reef’s gut. It didn’t feel right. Surely they should have been able to get through by now. The sky had cleared in the couple of hours they’d been outside, the clouds starting to break apart and the glorious blue sky peeping through. These were the best conditions to snowboard in. A massive dump of fresh powder, relatively warm weather compared to the last couple of days’ freezing temperatures, and no people to get in his way. The problem was, they’d be stuck out here until either the chopper or mountain rescue could get to them. If they didn’t get through soon, they’d have to turn, and head back to the cabin to wait out the night, and with the firewood getting low, they were going to be cold.

“I’m gonna head up a little higher. I’m getting something on the radio, but it’s not clear enough.”

“Alright man, I need to take off my boot and fix up my sock.”

They bumped fists and Reef watched Ford maneuver his skis, and trudge up the slope toward an outcropping of rocks. Time slowed to a crawl as the crack, crack, crack of the slope giving way underneath Ford’s feet smashed through the silence of the mountain around them. Reef shouted, and ran the fifty, or so, feet toward him; his movements slowed in the thigh deep powder. It was like he was anchored in quicksand. Reef reached out willing his arm to stretch to an impossible length, as he desperately tried to grab a finger hold of his friend’s ski pole. Ford had pivoted, skiing back toward Reef like a mad man.

He was too far away.

Ford pushed forward with powerful movements; but his attempt to pick up speed and get out of the way of the slipping slope was futile. Reef read the fear on Ford’s mostly covered face as the vital seconds ticked by.

“Ford, hurry up. Please,” Reef begged, shouting over the roaring of the snow careening down the mountain. The noise, as loud as a jet engine, drowned out his pleas as Ford moved closer to him. They were barely an arm’s length apart, as Reef’s worst nightmare unfolded before his eyes. Ford stumbled, the snow shifting beneath his feet quicker now, as the tsunami of white picked him up and tossed him like a ragdoll, hurtling him down the steep gradient. Reef reacted on instinct, running after the man that had, in four days, come to mean more to him than any friend he’d ever had. His eyes locked on the churning mass of snow, Reef frantically looking for any sign of Ford.

Calling his name over and over again, Reef searched, scanning every inch of the still snow before him. He had no idea how long he’d been looking. Minutes could have turned into hours, but Reef couldn’t give up hope. He wouldn’t. Was Ford alive? He didn’t pray to a god, but right then he would have done anything, including hand his soul over to the Devil himself, if it meant he could save Ford. “Please,” he whispered, his voice hoarse from shouting.

The emotion hit me hard though, and I loved that ~ Blissfully Bookerized

By day Ann Grech lives in the corporate world and can be found sitting behind a desk typing away at reports and papers or lecturing to a room full of students. With her quirky glasses and shiny leather briefcase, she has the librarian look nailed. All laced up tight in her pencil skirts and killer heels, her students can only fantasise about what she gets up to in her spare time. If only they could see those tattoos! Oh, and those notepads of story ideas tucked away in odd places that would be sure to have them fanning themselves!

By night she's a wife and mum and a purveyor of saucy stories that are filled with lust, raunchy scenes and ultimately love. Ann's an avid reader of anything sexy and firmly believes in the motto 'leave mummy alone, she's reading or writing.' Because of that, she is pretty hopeless when it comes to getting dinner on the table on time or cleaning the house.