Pre-Order-Excerpt & Giveaway: JUST THE THING by Marie Harte (The Donnigans #2) 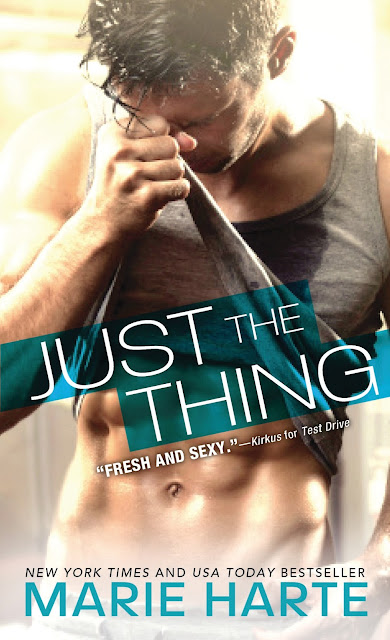 "The sultry sex and seduction scenes are just the icing on this incredibly rich and satisfying cake. Readers will sit down, read this book from cover to cover in one sitting, and then pick it up to read it all over again."―RT Book Reviews, 5 Gold Stars

Gavin Donnigan left the Marine Corps a shell of a man, hounded by guilt for deaths he couldn't prevent. But teaching a self-defense class at the local gym brings some stability to his life―along with a gorgeous woman who won't give him the time of day.

Zoe York lost her twin sister to a freak car accident a few months ago. She's been struggling to bury her grief, but it isn't until she signs up for a self-defense class with its distractingly hot instructor that she begins to come out of her shell again. With the memory of her sister telling her to live a little, Zoe decides a fling with buns-of-steel Gavin Donnigan might be just the thing.

Soon they're sparring both in and out of the gym. And for the first time in a long time, each is looking forward to tomorrow.

It had been one helluva day already, and it hadn’t even reached six yet. He’d secretly called dibs on the last remaining treadmill, needing to run out some kinks.

Problem was, so had she—Pink Yoga Pants.

Gavin Donnigan locked gazes with her before eyeing the distance to the machine, then saw her doing the same. A gentleman would let her go first… While an enthralled man would stand back and watch her work those magnificent glutes, those toned hamstrings and calves.

But Gavin was no gentleman, at least, not in the gym. His domain. His jungle. His—

“Oh, sorry.” He moved out of the no-neck’s path, now no longer able to see the treadmill. When he stepped around another idiot standing in the way, he saw her smirk at him as she stepped on the machine. She kept his gaze as she slowly warmed up, making a huge production out of stretching her arms up over her head, then grinning from ear to ear.

She gave him a mock salute—the sexy witch—then proceeded to ignore the holy hell out of him as she tuned out the rest of the world and ran. Not jogged, ran. That made half a dozen times she’d blown him off with that same smug expression. Then she’d pretend he didn’t exist.

“Gavin. Today, Bro. We have work to do before class.”

He groaned, needing the stress relief from a good run. “But Landon, I need to work out first.”

“Fine.” The d*ck wrapped a thick arm around Gavin’s neck and hauled him away in a headlock. “You want a workout? Let’s see if you can get out of this. Then I’ll throw you on the mat a few times and watch you flail as I beat your ass.”

Gavin sputtered, trying to breathe as his behemoth brother dragged him down the hallway toward the self-defense classroom.

Not cool to headlock a gym trainer in front of his many clients. Gavin tried not to wheeze as he fought Landon’s steel-hard muscles for breath. He glanced over and saw his nemesis laughing at him. Crap. The damage had been done. He heard snickers, mockery, and encouragement for Landon.

Major Donnigan. What an asshole.

The former Marine choking him growled, “Now suck it up, princess, and let’s see your moves. If you can’t do it, you sure as sh*t can’t teach it.”

With the eldest Donnigan brothers adjusting to civilian life, their younger sister constantly in trouble, and their little brother clueless about life in general, falling in love is the last thing on anyone's mind...

Can this Bossy Badass Marine...

The Marine Corps was everything Landon Donnigan ever wanted in life...until a bullet sent him home with a medical discharge. Teaching a self-defense class at the gym is old-hat for a marine, but when he meets sexy Ava Rosenthal, his combat skills are useless for protecting his heart.

Be her Mr. Right?

Ava can take care of herself and likes quiet, bookish men-not muscular warriors who think women need to be coddled. But Landon is more than he seems, and when they come together, the results are explosive.

Caffeine addict, boy referee, and romance aficionado, New York Times and USA Today bestselling author Marie Harte has over 100 books published with more constantly on the way. She’s a confessed bibliophile and devotee of action movies. Whether hiking in Central Oregon, biking around town, or hanging at the local tea shop, she’s constantly plotting to give everyone a happily ever after. Visit Marie's website and fall in love.