New Release-Excerpt & Giveaway: AIRMAN TO THE RESCUE by Heatherly Bell 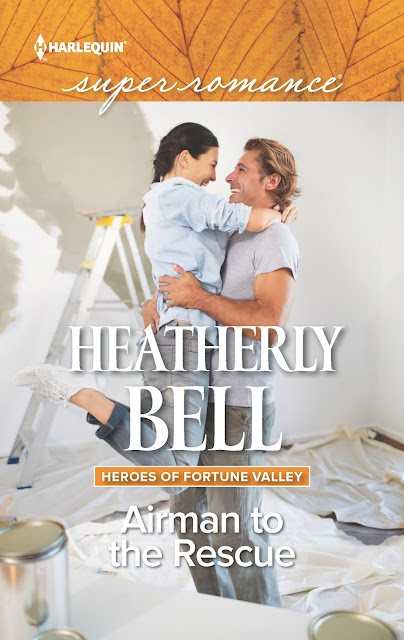 She's off-limits…and perfect for him!

It was supposed to be easy. Sarah Mcallister was going to flip her late father's house and head back to Colorado for a fresh start. But when her shady contractor gets arrested, taking most of her budget with him, she's at risk of losing everything. Enter Matt Conner…sexy pilot, single dad, Sarah's brother's best friend…and far too good with his hands for her peace of mind.

Moving into Sarah's spare bedroom is just asking for trouble, but Matt's trying to make amends with his troubled teen son, and a key step is finding a decent place to crash for as long as it takes. And the woman needs his help. Unfortunately, the closer the house gets to reno-perfect, the more he knows Sarah is meant to stay in Fortune Valley…with him.

Sarah stumbled into the now dark living room, and found Matt lying on the couch, Shackles curled up at his feet. Through the sliver of moonlight shining through the window, she could make out that he had his shirt off, a pillow over his face. As if she’d given him a headache.
Wait until she got going. “Matt.”
Under his pillow, she heard him groan.
“What’s going on here?” She stood hands on hips and then decided that looked too accusatory for seduction, so she relaxed her arms at her sides.
“Go to sleep, Sarah.”
“No.”
He lifted the pillow from his face, one eye open. “I don’t want to argue with you.”

“I don’t want to argue, either. I just want you to tell me what happened tonight.”
“Guess if you don’t know, I must not have done it right.”
“You did everything right.” Her voice softened. Now that she faced this—thing—between them her mouth was parched and dry. But she couldn’t lose her nerve now. “The only thing you did wrong was stop.”
“Wasn’t my choice.”
“But now it is.”
He didn’t move. “Go to sleep. Please.”
“Well, since you said please.”
“Seriously? That’s all it takes?”
“No. I lied. I’ll go to sleep, but not until you hear me out. I might be Stone’s sister, but I’m also a grown woman and I know what I want.”
“What do you want? Because I thought you wanted to fix this house and flip it. Sell it so you can get back to Colorado.”
Couldn’t a woman want more than one thing? “I want you, Matt. That’s what I want.”
“Do you? Be careful what you’re asking for. Maybe you don’t know me as well as you think you do.”
“I know enough. I know you’re one of the good guys.”
He snorted. “Yeah.”
“Do you think I’m going to fall in love with you? Is that it? Because that’s not an issue. I don’t believe in love.”
At that he removed the pillow from his head. “You don’t believe in love.”
“Does that shock you? Why should it? I grew up as the child of a broken home and I’ve seen more divorces around me than I care to remember. You of all people should understand.”
“Me of all people?”
“You’re also from a broken home. And…you’re a single father.”
“That doesn’t mean I don’t believe in love. And I think it’s pretty messed up that you don’t, Sarah.”
“Okay. What do you want? Is it me at all? Because a couple of hours ago you had me pretty well convinced, so if you’ve changed your mind you need to tell me now.”
There. She couldn’t believe she’d let all her thoughts spill out at last. Everything she’d intended to tell him for months had come pouring out of her lips, like the semidark of the room had given her added courage. In the ensuing quiet Sarah didn’t think he would answer her at all. Worse, in the dark of the room she couldn’t take a cue from his usually expressive eyes.
“I want you, Sarah.” He finally spoke, the sound of his voice so naked and raw that Sarah’s knees went boneless.