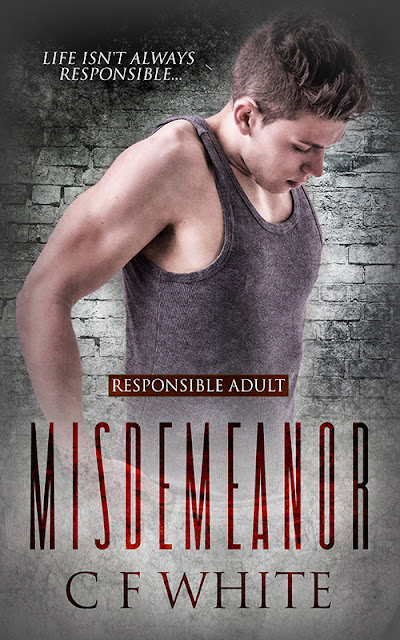 
After his mother tragically dies and his deadbeat father goes off the rails, nineteen-year-old Micky is left to care for his disabled little brother, Flynn.
Juggling college, a dead end job and Flynn's special needs means Micky has to put his bad boy past behind him and be the responsible adult to keep his brother out of care. He doesn't have time for anything else in his life.

Until he meets Dan.

"Amazingly gritty and raw. This slice of life is so realistic it flays you." - Pride Publishing

Micky cursed loudly and squinted through the morning glare to read the alarm clock that was obviously having trouble performing its one and only basic function. He threw off his duvet and jumped out of bed, his foot landing on a plastic wind-up toy penguin discarded on the floor. The penguin openly mocked him by tossing itself into a noisy backflip.

Micky cursed again, bending down to pick up the toy and throw it savagely against the wall. It shattered into a million pieces and Micky felt instantly guilty.

“Flynn!” he yelled, hopping over to his bedroom door and yanking it open. Treading more carefully to the bathroom opposite, he rubbed his eyes before coming face-to-face with himself in the mirror above the sink.

He looked like sh*t. No change there. The three hours of almost sleep he’d gotten obviously hadn’t done anything to improve on his disheveled appearance. He ran a hand over the stubble on his chin. He needed to shave but now didn’t have the time. Micky turned on the tap, dunked his head under the cold stream and squeezed paste onto his toothbrush.

“Flynn!” he shouted again, louder this time, before shoving the toothbrush into his gob and brushing vigorously. The minty taste did nothing for his dry mouth.

Still holding the toothbrush between his lips, foam dripping out from the side of his mouth, Micky turned.

“We’re late,” he said, trying to suck the minty drool back up and stop it escaping from the corners.

Flynn stood in the doorway, clutching another wind-up plastic toy. He kept spinning the thing around, setting off an ear-piercing buzz as it unwound at double speed. He appeared so small and fragile. More like a five-year-old than his actual eight years. He’d gotten dressed. Sort of. He’d managed to pull on his gray school trousers over his pajama bottoms and his army-green jumper clung inside out. No socks, and his mousy-brown curls stuck out from his head in all directions.

Micky’s heart melted a little at the sight.

“Well done, Flynn.” Micky finished brushing his teeth, spat down the plughole and cupped a handful of water into his mouth to rinse. Turning back to his brother, Micky then crouched in front of him. “But how about we try taking the pajamas off?”

Flynn looked down, waggling his toes, and back up at his big brother. “Why?” he asked, confused. “I put them back on later.”

Micky laughed. The kid had a point.

“Come on.” Micky took hold of Flynn’s hand to walk him back into the small box room. It had twin beds, pushed up against opposite sides. One had used to belong to Micky before he’d moved into the master bedroom.

“What time did you get up today?” Micky asked, dragging Flynn’s jumper over his head.

He wound up the blasted plastic toy again and Micky breathed in deeply, preventing his immediate instinctive reaction to take the thing and smash it against the wall in comradeship with its penguin mate.

“That’s early,” Micky said, pulling off Flynn’s pajama top then rooting around in the drawer for his brother’s school polo shirt. He found it scrunched at the bottom and helped Flynn squirm into it while trying to smooth out the creases.

“For what?” Flynn asked, holding on to Micky’s shoulder as he knelt and stepped out of his trousers.

“Everything,” Micky replied with a yawn.

Micky looked into Flynn’s blue eyes. The white starburst pattern within them gave him the feeling of being hypnotized. Micky blinked.

“Yes, he is.” Flynn smiled widely, his plastic toy buzzing in his hands.

Micky stared down at for a brief moment, then spun around and ran full pelt down the stairs and into the living room. The place was dark and dank, stinking of booze and fags with beer cans littering the floor.

Micky yanked open the curtains to witness the disgusting figure sprawled on the sofa. Tatty stonewashed denim jeans bagged around his knees and the T-shirt he wore, once white in color, was stained yellow with patches of Micky didn’t want to know what. His greasy, graying hair hung around his face like rats’ tails. He was snoring and every breath out from his wide-open mouth filled the room with a putrid stench.

Micky kicked at the arm dangling off the sofa. The man grumbled but didn’t move. Micky kicked him again, more fiercely. Opening one eye, the brute belched as he squinted through the glaring sunlight.

“Get the f*ck out,” Micky demanded.

The laughter that followed made Micky’s skin crawl, along with the irritating scratching of fingernails across the man’s chest. The shirt rubbed against the curly dark hairs scattering his fat body and made the unbearable scraping of nails down a chalk board.

The grunted response wasn’t something Micky could decipher, nor did he care to. Micky watched with contempt as he rolled off the sofa and landed on the floor with a thump. Several beer cans crunched under his heavy frame and he rolled again to push up on to all fours. Grunting once more, he heaved himself to stand. He tripped on his own feet and clutched at the wall. Micky clenched his fists at the ready as the second loud belch blasted out and Micky had to turn away from the oncoming stink.

“Money,” he demanded, holding out a hand.

“Get f*cked,” Micky spat back.

He staggered over to the fireplace mantelpiece and made a grab for the handmade clay moneybox shaped like a car. Micky wrapped firm fingers around his wrist and squeezed tightly.

“Over my dead body.” Micky gritted his teeth. Clutching the wrist harder, he used his other hand to root around in the dirty jeans pocket and yanked out a key. Shaking his head, Micky shoved him away. “Now leave, before I f*cking kill you.”

“Micky?” Flynn’s delicate little voice squeaked from the living room door. He clung to the plastic toy still in his hand, his eyes tightly shut.

Micky ran over, picked him up and settled him on his hip. For an eight-year-old, Flynn weighed no more than a couple of stone, his body skin and bones. It wasn’t his fault. It was the condition. Flynn rested his head on Micky’s shoulder, wrapping his arms around his big brother’s neck, still clamping his eyes shut.

Brought up in a relatively small town in Hertfordshire, C F White managed to do what most other residents try to do and fail-leave.

Studying at a West London university, she realised there was a whole city out there waiting to be discovered, so, much like Dick Whittington before her, she never made it back home and still endlessly searches for the streets paved with gold, slowly coming to the realisation they're mostly paved with chewing gum. And the odd bit of graffiti. And those little circles of yellow spray paint where the council point out the pot holes to someone who is supposedly meant to fix them instead of staring at them vacantly whilst holding a polystyrene cup of watered-down coffee.

She eventually moved West to East along that vast District Line and settled for pie and mash, cockles and winkles and a bit of Knees Up Mother Brown to live in the East End of London; securing a job and creating a life, a home and a family.

Having worked in Higher Education for most of her career, a life-altering experience brought pen back to paper after sheíd written stories as a child but never had the confidence to show them to the world. Having embarked on this writing malarkey, C F White cannot stop. So strap in, it's gonna be a bumpy ride...