New Release-Excerpt & Giveaway: ADDICTED TO THE DUKE by Bronwen Evans 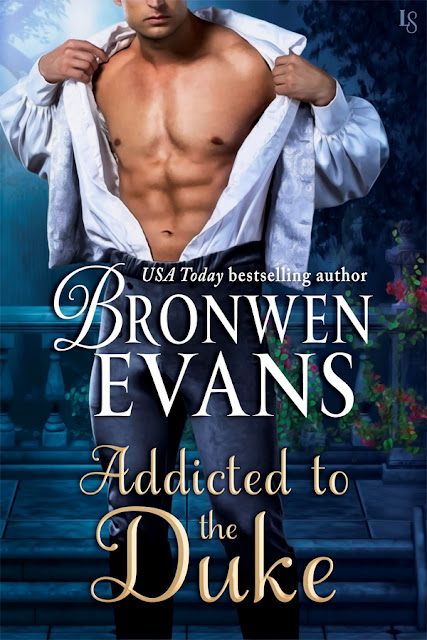 ADDICTED TO THE DUKE
Bronwen Evans
Series: Imperfect Lords Book 1
Genre: Regency Historical Romance, Victorian Romance
Publisher: Random House Loveswept
Publication Date: June 13, 2017
Add to Goodreads
A lovestruck lady charms the duke of her dreams during an expedition on the high seas in this sexy, swashbuckling novel from USA Today bestselling author Bronwen Evans.
Alexander Sylvester Bracken, Duke of Bedford, has a mission: sail to the Mediterranean and track down Lady Hestia Cary's missing father. It is a straightforward task, but for two rather vexing complications. First, the sea holds painful memories; second, for her own safety, Hestia is to accompany him. As Alex battles the demons of his past, he must also resist Hestia's surprisingly skillful attempts at seduction. After all, Alex has sworn to leave her untouched, and he intends to honor that vow-until he can properly ask the Earl's blessing.
Ever since His Grace rescued Hestia from the arms of a Turkish pirate six long years ago, her heart has belonged to Alex. So when he agrees to help find her father, Hestia is thrilled. Although Alex tries to hide it, there's passion in his eyes-and a frisson of desire in the air-whenever they meet. On board ship, miles from home, Alex won't be able to deny her any longer. But with scoundrels lying in wait, she may not live to tell the tale of her conquest.

Bronwen Evans continues to write, a brilliantly and masterfully work of romance! Such feelings and emotions shown throughout this powerful and compelling story, are hard to convene to readers. But she managed it, beautifully.
- April, Goodreads Reviewer

An epic drama of love, lies, self-control, suspense, surprises and secrets. It's a captivating storyline that keeps you turning the pages.
- Mary Lynde, Goodreads Reviewer

As with the rest of his life, Alex discovered that his willpower was sadly lacking when, just after one in the morning, he found himself in front of Hestia’s cabin door.
Torn by indecision, he leaned his forehead on the door and warred with himself.
There was a high probability that he would die in the coming days, so God, and David, could damn his soul to hell, but he wanted one night with Hestia, in his bed, where he was not in dreamland. He wanted a clear head to perfectly remember her touch. Her taste. Her scent. Her loving . . .
To remember that for one magical night she was his.
Selfishness, thy name is Alexander.
He quietly slipped inside, closing the door behind him. He leaned back against the hard wood, warmth spreading through his chest because Hestia was standing beside the porthole, her thin linen nightgown completely transparent. It took his breath away.
She turned to him. “Some prayers do get answered. I prayed you’d come.”
He crossed the room in two long strides, his arms reaching for her and pulling her tight against his chest as his lips found the bounty he’d been dying to taste all evening. Her soft lips moved under his, and when they parted to give him entrance, his knees almost buckled.
The kiss was hard, possessive, showing her that she belonged to him. Only him.
Finally she tore her mouth from his.
“You must have known I’d never choose David.”
His heart took flight. “And here I thought you were an intelligent girl.”
“Then why are you here?”
He bent down and tenderly kissed her lips. “I can’t run anymore. I’m so sick of denying my need for you.” He grimaced, not believing how easily he’d folded. The future, and the world beyond finding her father, beyond seeking his vengeance, dissolved, along with his resistance. Years of resistance, wasted years.
To deny his attraction for her had been futile from the start. The power she had over him was frightening. He belonged to this girl, body and soul, and he knew it. He could no longer refute his turbulent need for her.
And thank God, for whatever reasons, regardless of his continued remoteness and cold treatment of her, she’d chosen him. His whole body was trembling, he’d never experienced such driving need, he was only just holding on, one minute more and he’d devour her. He swallowed hard.


“You know I will still go after Murad. This night, and our wedding, will not change that.”


a Rafflecopter giveaway
ON EACH TOUR STOP
A book in the highly praised Disgraced Lords series by Bronwen Evans
Be sure to visit each tour stop for more chances to win.
Check the tour schedule below.

USA Today bestselling author, Bronwen Evans grew up loving books. She writes both historical and contemporary sexy romances for the modern woman who likes intelligent, spirited heroines, and compassionate alpha heroes. Evans is a three-time winner of the RomCon Readers' Crown and has been nominated for an RT Reviewers' Choice Award. She lives in Hawkes Bay, New Zealand with her dogs Brandy and Duke.
You can keep up with Bronwen's news by visiting her website: http://www.bronwenevans.com/
Get a FREE Book by signing up to Bronwen Evans's newsletter.
Connect with Bronwen Evans on social media: Facebook | Twitter

Follow the book tour from June 14 - 27, 2017.
Discover more features, excerpts, reviews, interviews, fun facts and other extras on the tour.
To check the latest tour schedule, visit the Addicted to the Duke Book Page at Book Unleashed.
In partnership with