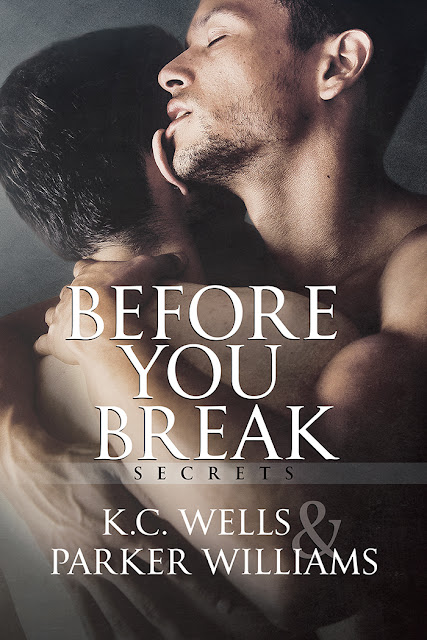 Six years ago Ellis walked into his first briefing as the newest member of London's Specialist Firearms unit. He was partnered with Wayne and they became fast friends. When Wayne begins to notice changes-Ellis's erratic temper, the effects of sleep deprivation-he knows he has to act before Ellis reaches his breaking point. He invites Ellis to the opening of the new BDSM club, Secrets, where Wayne has a membership. His purpose? He wants Ellis to glimpse the lifestyle before Wayne approaches him with a proposition. He wants to take Ellis in hand, to control his life because he wants his friend back, and he figures this is the only way to do it.

There are a few issues, however. Ellis is straight. Stubborn. And sexy. Wayne knows he has to put his own feelings aside to be what Ellis needs. What surprises the hell out of him is finding out what Ellis actually requires.

This is definitely my favorite book of the ones these authors have written together.  The more they write together, the better their collaboration gets.  I do admit that I was unsure of the matchup between Wayne and Ellis at first given how everything appeared at the start of the story.  I was actually not terribly fond of Ellis in the beginning since I felt like his family ran roughshod over him, and I get frustrated when people don’t stick up for themselves (even characters in a book of fiction).  But appearances can be deceiving, and I’m glad I kept an open mind with his character.

Wayne is absolutely hands-down, one hundred percent Dom.  It’s evident not just in his private life, but in his public one as well even if it’s not called that.  He is strong, extremely protective of anyone he cares about, and a true leader.  Ellis has had his life shaped by parents-his father in particular-who have antiquated views of life and family, and it’s been to his personal detriment.  He is stretched to the max emotionally and physically, and it’s taking a toll on him in more ways than one.  When Wayne first considers the idea of taking Ellis in hand thru BDSM to get him back under control, I was a bit wary.  But Ellis’s character fits the submissive role like he was born to it—even when he’s pushing back against it.

This story allows for a lot of character growth for Ellis as Wayne guides him, and as he really comes into his own and takes back his life.  Where I had doubts in the beginning, by the end it all fit much better when it had become obvious that it was everything Ellis needed. In another nod to Wayne’s no-nonsense, take-charge personality, he never lets Ellis run from his problems, and helps him figure out how to confront them head-on, solving them together.  While you might think when you first start reading this story that it’s going to be GFY (gay-for-you), don’t let initial appearances color your opinion.  There’s always more to things than meet the eye.

I really liked that we got to see some of the characters from the Collars & Cuffs series return for some cameos, and even more that we got to see Jarod and Eli in these fresh roles.  It made me like Eli a bit more (I wasn’t his biggest fan in Dom of Ages), and I loved how Jarod seems to be spreading his wings.  I am really looking forward to many more books in this series, and I think that Before You Break was a really good start to it.  4.5 stars, and I would recommend this story to any M/M BDSM romance fan…and if you’re already a fan of Collars & Cuffs, you’re going to love a return to the themes found there and some of the characters too.  This book is only for readers 18+ due to adult language and explicit M/M sexual content.

K.C. now writes full-time and is loving every minute of her new career. The laptop still has no idea of what hit itÖ it only knows that it wants a rest, please. And it now has to get used to the idea that where K.C goes, it goes.

And as for those men in love that she writes about? The list of stories just waiting to be written is getting longer... and longer...


Happily Ever After Comes With A Price Tag. Parker Williams began to write as a teen, but never showed his work to anyone. As he grew older, he drifted away from writing, but his love of the written word moved him to reading. A chance encounter with an author changed the course of his life as she encouraged him to never give up on a dream. With the help of some amazing friends, he rediscovered the joy of writing, thanks to a community of writers who have become his family. Parker firmly believes in love, but is also of the opinion that anything worth having requires work and sacrifice (plus a little hurt and angst, too). The course of love is never a smooth one, and Happily Ever After always has a price tag.