From Multi-Published Mystery Author
Glen Ebisch
A mysterious death involving a meteorologist...
Can she weather the storm brewing in the horizon? 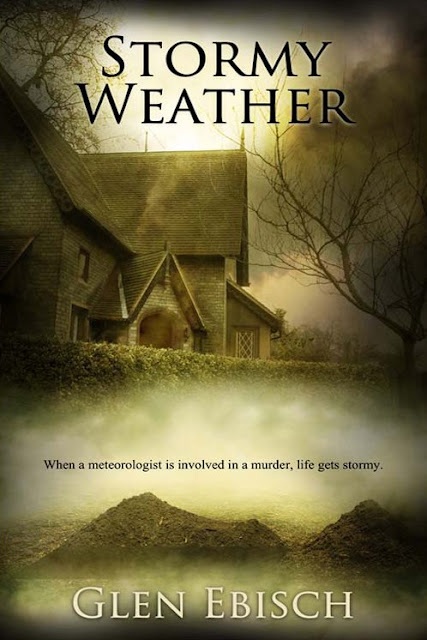 STORMY WEATHER
Glen Ebisch
Genre: Mystery
Publisher: The Wild Rose Press
Publication Date: January, 2017
Add to Goodreads
A dead meteorologist leads to stormy weather.
When the body of Travis Lambert, senior meteorologist, is found buried in a shallow grave next to the house of Stormy McCloud, junior meteorologist, things look bad.
The station hires Chance Malone to investigate the murder, but her situation doesn't improve. Malone is attractive, charming, and funny, all qualities that her past experience with men has led her to avoid. It doesn't help that Stormy has little interest in religion, while Malone is the unusual detective that keeps a Bible in his desk drawer instead of a bottle of scotch.
When Stormy's estranged mother appears on the scene, things become even more complicated. As they discover more about the dark secrets of Travis's life, Stormy is forced to reconsider her view of men, her mother, and her future.
Author Glen Ebisch's mystery suspense crime novel, Stormy Weather is a first-rate thriller. I found a solid story-line, well-written, with well-developed characters, and plot lines which will hold the readers interest.
- verasbookreviewsandstuff, Amazon Reviewer
This book has quite a bit of mystery of where you reveal each piece a layer at a time. You learn one thing about the victim from his co-workers and then you dig a little deeper and you learn something else.
- Seraphia, Amazon Reviewer

Available now for $4.99 only. Grab your copy today.
Amazon | Barnes and Noble

“You tried to cheat me,” Adams shouted at Chance.

He fumbled under his coat and came up with a gun, but by then I had charged out of the closet. I fired one shot and had mixed feelings as Adams fell. The man in the mask seemed to have been left a beat behind by the action. He finally turned toward me, but I had already pointed the gun at the center of his chest.

“Put down the gun,” I shouted, half-deafened by the gunshot.

Before he could respond, there was a series of loud shouts and cops seemed to appear from everywhere. The man in the mask dropped his gun and put his hands high in the air. I immediately put my gun down on my official weather desk, not wanting to risk becoming collateral damage.

“What are you doing here?” Chance said, coming toward me. I could tell that he wasn’t sure whether to be angry or amazed. I began to shake, probably a reaction to shooting a man.

“Keeping an eye on you,” I said softly.

I don’t know whether it was the adrenaline or happiness at being alive, but I wrapped my arms around him and kissed him hard on the lips. After a surprised moment, he began to respond.

Glen Ebisch taught philosophy in college for over twenty-five years and has been writing mysteries for almost as long. He has been fortunate enough to have over twenty published. He lives with his wife in western Massachusetts and now focuses full time on writing, exercise, and travel.

Follow the book tour from June 19 - 24, 2017.
Discover more features, excerpts, reviews, interviews, fun facts and other extras on the tour.
To check the latest tour schedule, visit the Stormy Weather Book Page at Book Unleashed.
In partnership with