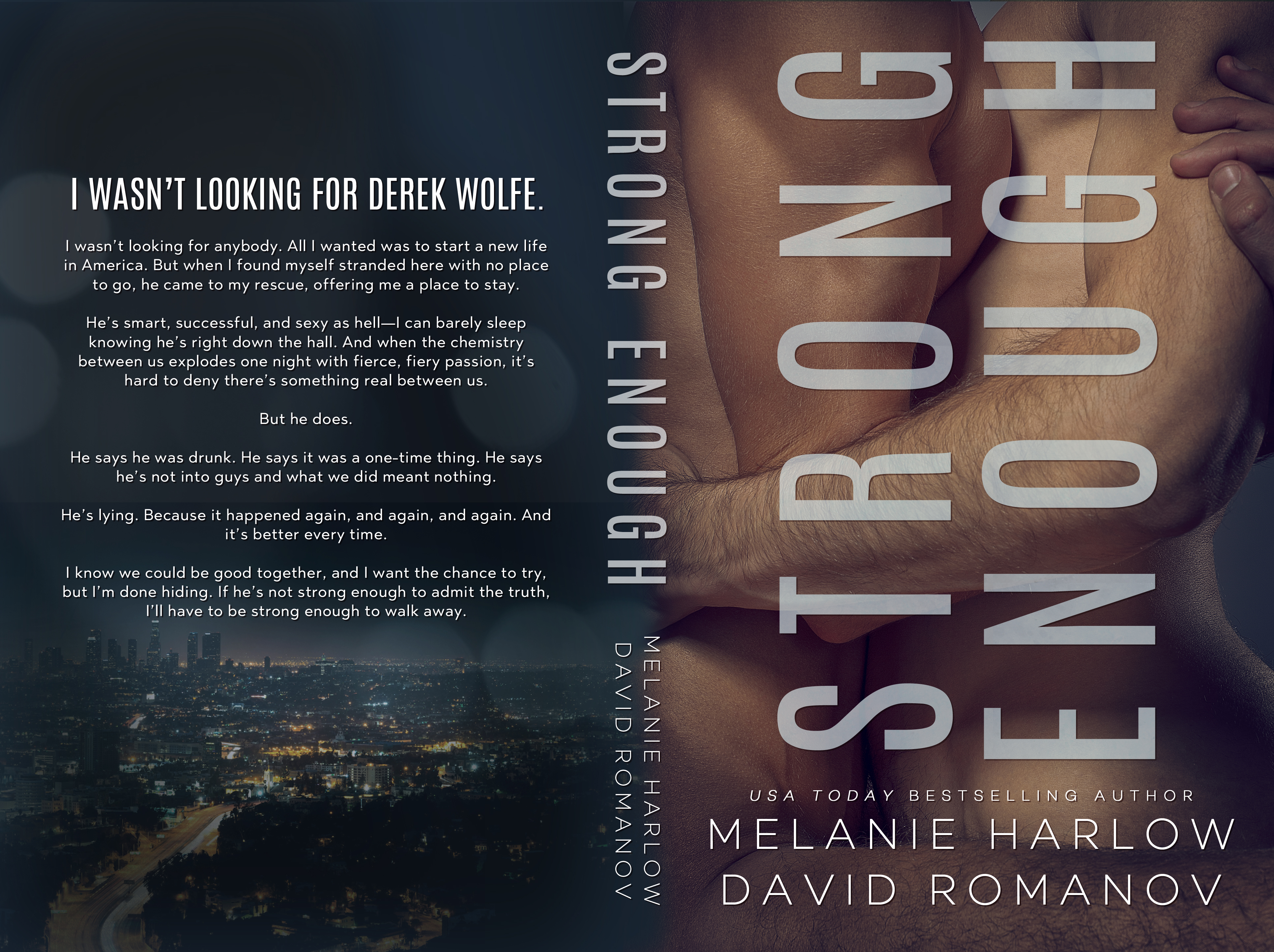 I wasn’t looking for Derek Wolfe.

I wasn’t looking for anybody. All I wanted was to start a new life in America. But when I found myself stranded here with no place to go, he came to my rescue, offering me a place to stay.

He’s smart, successful, and sexy as hell—I can barely sleep knowing he’s right down the hall. And when the chemistry between us explodes one night with fierce, fiery passion, it’s hard to deny there’s something real between us.

He says he was drunk. He says it was a one-time thing. He says he’s not into guys and what we did meant nothing.

Figuring I’d had enough booze to blunt his effect on me, I rolled up the sleeves of my black button-down shirt and moved next to him. “I’ll help you.”

I caught him trying to not to look at my wrists and forearms, and it made me smile. How does it feel to want someone and have to hide it? “You wash, I’ll dry?”

We worked in silence, shoulder to shoulder, and I found myself increasingly—and disturbingly—pleased at the thought of him being attracted to me and being forced to conceal it. It was f*cking horrible of me to take pleasure in his discomfort, but I liked being secretly wanted. Being illicitly desired. Being the object of his covert glances and maybe even his darkest, dirtiest thoughts. I let our arms touch more than necessary, as thrilled by the physical contact as I was by the thought of what it might be doing to him.

For there is no man who does not sin.

My d*ck started to get hard, clearly unbothered by the whiskey that was breaking down my inhibitions, pushing past all my defenses, and letting my imagination run wild.

“Carolyn is so nice,” he said, handing me the last serving dish left to be dried.

He turned off the water. Rested his wet hands on the edge of the sink. “I didn’t realize you had a girlfriend.”

And I heard it in his voice—the slightest edge of jealousy, so faint I might never have noticed it had I not been so hyperaware of everything about him right now. I f*cking loved it.

“She’s not my girlfriend.”

“Oh.” Now there was confusion. “I guess I misunderstood.”

“She wants to be my girlfriend.”

Of course there was silence. Maxim would never ask what the problem was. But I wanted to tell him. I wanted him to know. I wanted to share the impossible longing I felt with one person who might understand it.

“The problem is me.”

He was completely still. Before I could stop myself, I covered his right hand with my left. “Sometimes I don’t know what I want.”

He yanked his hand from beneath mine and we faced each other.

For the first time tonight, I looked him right in the eye. Nothing around us existed for me anymore. I heard only his breath. Smelled only his skin. Saw only his guarded expression.

I had to have him. 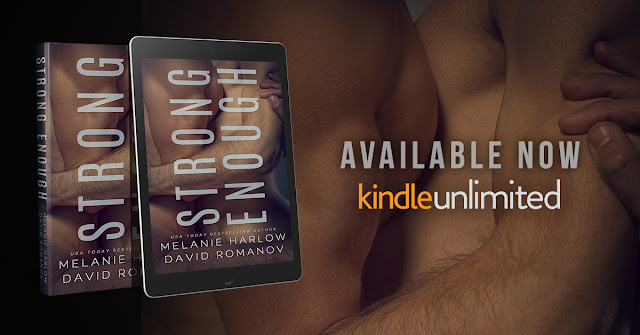 Strong Enough is Melanie Harlow’s first M/M and David Romanov’s first fiction book, and with the exception of a couple of very minor elements of Maxim’s situation that were not addressed by the end of the story, I thought the authors did a spectacular job of crafting a captivating story that delivers on heat, drama, tension and emotional impact.

Maxim is pretty laid back, calm and easygoing, and is very ready for his new adventure in America.  He’s determined to make it on his own, and is willing to accept and make the best of his situation to do so.  Derek is a successful businessman, but not so successful in his personal life…he just can’t seem to find that certain someone with whom he feels that spark.  At least not until he meets Maxim—which throws Derek for a loop since he has suppressed that side of himself, tucking those types of feelings far into the back of an ultra deep, dark closet.  No matter though…the attraction and chemistry is still there, and ultimately breaks through even as Derek tries to deny it.

The conflict comes into play when Maxim is ready to strike out on his own in his quest to fulfill his American dream, but Derek wants to keep Maxim with him—privately.  But Maxim had to repress his sexuality back home in Russia, and now that he can truly be himself, he doesn’t want to be hidden away.  Derek’s not ready to come out—far from it actually—and might not ever be able to accept that aspect of himself, no matter how much he feels for Maxim.  The impasse this creates between them seems unsolvable unless one of them gives in to the other.

I understand both sides, and giving in on either side may seem unfair to either man.  Derek giving in is terrifying for him since he’s been brought up to believe being gay is a sin, and it’s been drilled into him by his parents.  He doesn’t want to lose favor with his father and possibly lose his chance at his continued professional success in the family business.  No one should have to feel like they have to come out of the closet before they are ready.

Maxim comes from a country where being gay is just not safe, regardless of acceptance elsewhere in the world.  In coming to America, he’s finally free to be who he is and doesn’t want to have to hide it.  Derek and Maxim’s situations are in direct opposition to each other’s, and either one giving in to the other goes against their own personal feelings.  So I see the issue through both their eyes; why should Maxim give in and hide to be with Derek when he can finally be free, and why should Derek come out to be with Maxim and risk his family, professional success and maybe his soul?

This story stirs up plenty of emotions, and it certainly had my complete attention from start to finish.  Strong Enough was a 4.5-star read for me, and I highly recommend it to any M/M romance fan.  This story is for readers 18+ for adult language and M/M sexual content…regardless of the conflict, the heat between Derek and Maxim is undeniable and their physical intimacy is scorching! 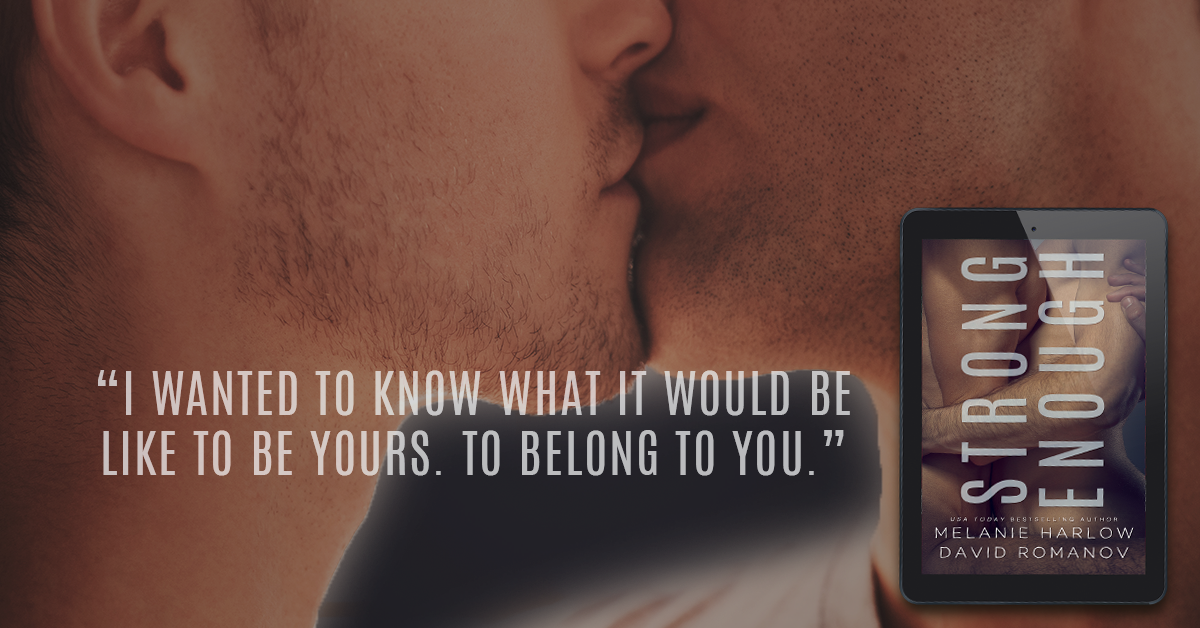 Melanie Harlow writes sexy, emotional romance about strong, stubborn characters who can’t help falling in love. She’s addicted to bacon, gin martinis, and summer reading on the screened-in porch. If she’s not buried in a book or binging on Netflix, you might find her running, putting a bun in someone’s hair, or driving to and from the dance studio. She lives outside Detroit with her husband and two daughters.

Melanie is the USA Today bestselling author of the HAPPY CRAZY LOVE series, the FRENCHED series, MAN CANDY, AFTER WE FALL, IF YOU WERE MINE, and the sexy historical SPEAK EASY duet, set in the 1920s.

For David Romanov, STRONG ENOUGH is to a great extent autobiographical. Born in Russia and raised in Europe, he landed in the United States at the age of 24, where he learned a lot about cultural differences between East and West. David firmly believes in ‘The One’ and learning through love. When he isn’t traveling or educating Melanie in Russian culture, he enjoys books and the company of his husband and dog in Los Angeles.

Posted by Making it Happen at 7:15 AM