Will the promising chef with dreams of starting his own restaurant and winery see the dark, quiet lure of his long time crush's conservative older brother, Dylan Armstrong? 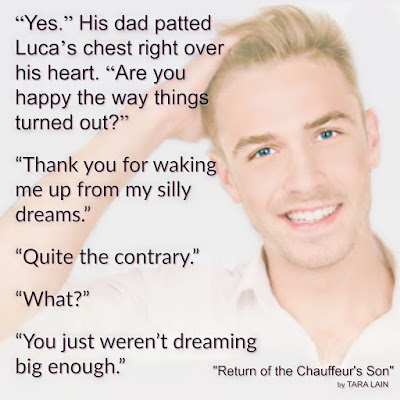 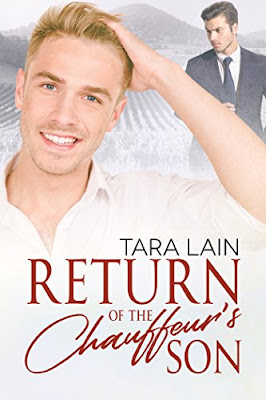 Return of the Chauffeur's Son
By Tara Lain

Luca McGrath may be returning to Napa Valley, California, as a promising chef with dreams of starting his own restaurant and winery, but his heart still lives with the bad-boy son of a billionaire, James Armstrong. Luca spent his childhood playing games with the golden boy of California society, so blinded by James he barely noticed the dark, quiet lure of his conservative older brother, Dylan Armstrong.

But now Luca’s home, and his own powers of attraction are enough to make James question his dedicated heterosexuality and his promised marriage to a wealthy and powerful businesswoman. The obvious attraction between Luca and James spurs Dylan into action—but he’s fighting a huge secret. While Luca dreamed of James, Dylan dreamed of Luca. When Luca gets caught in the struggle between the brothers and gets accused of culinary espionage he’s ready to chuck the fairy tale—unable to even imagine Dylan’s power to make his dreams come true. 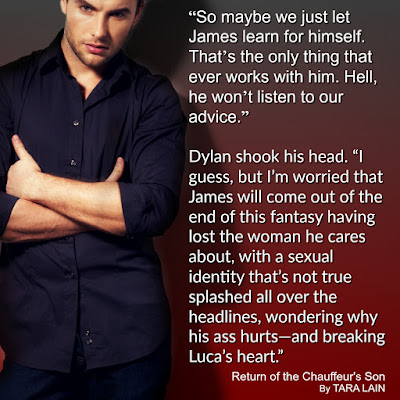 That soft, deep voice slithered up his spine and filled his brain with even more fog. He turned and watched Dylan amble toward him across the grass, dressed in black jeans and a black long-sleeved T-shirt. He moves like a cat. “I’m not sure I’ve ever seen you in anything but a suit before.”

“It does happen—occasionally.” Dylan half smiled.

“They should star you in a movie about a panther that turns into a human.”

Luca cocked his head. “You know that old movie?”

“Yes. Movies are a passion of mine.”

“Seriously. I thought you just worked all the time.”

Luca leaned back against the fence. “What are some of your favorites?”

Dylan stepped to the fence and leaned against it too, about two feet from Luca. Do I really feel heat coming off his skin? Luca took a deep breath.

Dylan looked up at the stars. “I love No Country for Old Men.”

Dylan glanced at him. “Funny?”

“It’s just the stereotype of the powerful businessman taking out his enemies wholesale. Sorry.”

“Okay. Well, I love The Notebook.”

“Nope. I don’t think it’s a great movie, but I do love the chemistry between the young couple.”

“Yeah, the old couple’s story was even too sappy for me.”

“No sh*t!” Luca chuckled. “One of the least appreciated movies ever. Love that film.”

“But I’ll see almost anything with Tilda Swinton in it.”

“Me too.” He shook his head. How could they have so much in common?

“I also love My Fair Lady.”

“Now you are joking.”

Dylan smiled and gazed at Luca. “No, I’m not joking. I’m gay. Remember?”

The word felt like a karate chop to the windpipe. “Uh, right. Sometimes I forget.”

“Uh, wonderful. They really want me to develop new recipes and dishes. It’s what I love—along with wine making.”

Luca nodded. “Part of my degree is in winery management.”

Dylan pushed away from the fence. “You’re a man of many talents, Luca.”

What the f*ck did he mean by that?

Dylan strolled a few feet toward the house.

Luca said, “By the way, I wanted you to know that James invited my dad and me to your party and polo match this weekend.”

That got his attention. He looked back with a crease between the beautiful eyes. “Oh? When did he do that?”

“Earlier tonight, when he and Nila had dinner at the restaurant. She seconded the invitation and, since it’s kind of her party, I figured it would be okay.” Did that sound like he had a chip on his shoulder?

Luca stared at the grass. “If you ever want somebody to watch a movie with, just holler.” Crap! He wanted to bite off the tip of his tongue.

Dylan looked equally astonished. “I’ll keep that in mind.” He turned and walked into the shadows.

Why the hell did I say that? The sound of the big house door opening and closing carried across the quiet space.


And so damned beautiful. 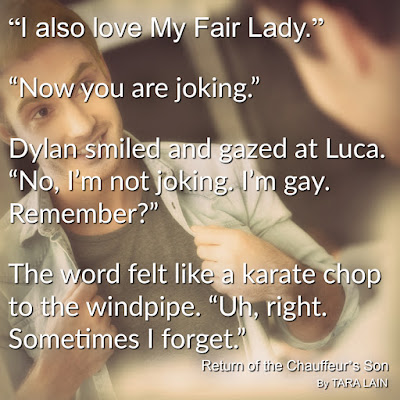 Intrigued by the blurb, I dove right into this book as soon as I got it.  What I found was an M/M version of the movie Sabrina, except here in this story you get a lot more backstory and fleshed out passages than what you can see on a screen.  It's not an exact replica-there are certain scenes that deviate from the traditional story from the movies-but there are enough similarities that I'd wager if you liked the movie and you're also a fan of M/M romance, you're going to enjoy this book.

I really liked both Luca and Dylan when they were introduced.  Luca has a clear vision of what he wants for his professional future, even if his vision of his personal one is seen through his rose-colored glasses.  Dylan's already a very successful businessman, and he radiates power-he also knows the power of his wealth and readily admits to it (which I actually found a little annoying).  Now James?  From the moment he showed up in the story I was wary of him and just KNEW his words and "feelings" toward Luca weren't really sincere.

There's the expected feelings that emerge between Luca and Dylan-which neither of them really know what to do with-and with James in there muddying up the waters it all results in a bit of angst for the characters.  In addition, there's the ongoing storyline of the upcoming festival competition between the local restaurants that introduces extra drama.

While the first two-thirds or so of the story moves along quite well-if a bit too closely to the Sabrina scenes in some areas for comfort-the last part of the book felt too rushed to me.  I also had a hard time reconciling Luca and Dylan's more raw and frenzied attitudes towards each other once their physical relationship takes off with their more calm, comfortable ones beforehand.  I was also surprised at the timing of the question Dylan kind of asked and Luca emphatically answered at the festival as I couldn't see how they would have reached that point so quickly (sorry, I don't want to say more and spoil it for anyone).

In the end, I'm sort of on the fence about this one since on the one hand I love the premise of the story and the characters; it's just the execution that didn't quite get there for me.  If you're a fan of Sabrina-type stories, this one will surely pique your interest, and this book is meant for readers 18+ due to adult language and M/M sexual content. 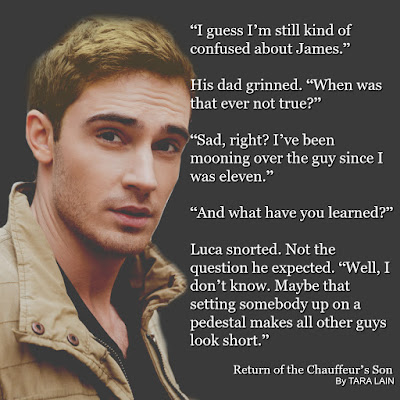 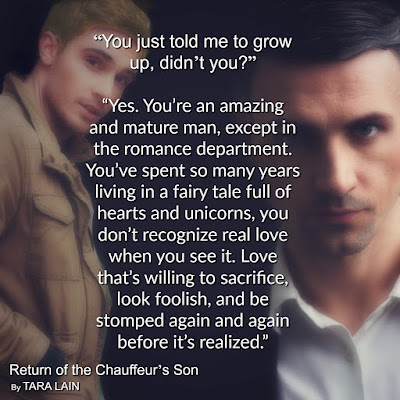