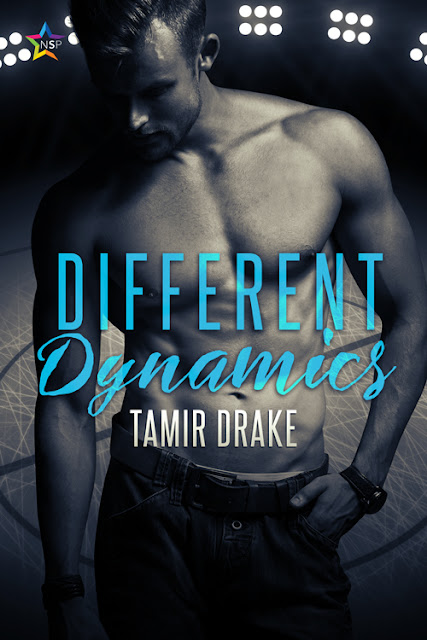 Richard doesn’t mind being an omega; all he cares about is playing good hockey, even though it means ignoring the media that tries to rip him apart for it. They don’t think omegas should be allowed on the ice, but he gets along fine. He’s team captain. He can play with the best of them.

The one sticking point is his heats; Richard might be on suppressants, but he’s one of the unlucky ones who still gets a heat every four months or so. They suck to deal with, especially alone, but seeking out a heat partner isn’t an option. The PR nightmare alone keeps him from any kind of hook-up. He can’t risk it. Hockey is all he’s got.

When Richard’s heat comes early while his team is on a roadie, teammate and best friend James helps him out of a bad situation. Tired of hurting, Richard decides it’s better not to go it alone. And James is safe and warm; he’s a great alpha who knows just what Richard needs. When Richard also imprints on big, bad rival player, Dmitry Sokolov? There’s sweet comfort in a three-way with lots of knotting and dirty talk.

His hockey team was in the middle of a roadie when Richard woke up feeling painful and tender and thought, F*ck. His heat was early.

It wasn’t supposed to happen; being on suppressants meant his heats should come every four months instead of every thirty days, and they were supposed to be timed out. This one was due next week, when he’d be back home with two days off skating to at least deal with it. The first forty-eight hours, for him, was always the worst part. Yeah, he’d still have interviews and charity events in the downtime, but with the libido inhibitor and odor-blockers, he’d always been able to manage.

There was nothing for it now. He had practice and then the game—at least it was an afternoon game—so he sucked it up and dug out the briefs with their sewn-in pocket for absorption pads that, luckily, he always took with him just in case. He also popped a couple ibuprofen to try to ward off the pain he knew was coming. With any luck, he’d be able to get through practice and the game, and then have the night and tomorrow morning to curl up under his covers, suffer, and hate himself.

Every omega’s heat was different. Some had it so easy they didn’t have to bother with suppressants. Some had a partner, or they’d find one to help them through their heat, which could last between three days and nine. Others went on suppressants and were in the lucky camp of not having to ever deal with heats.

Richard had never been lucky. He had an implant that kept his heats as regulated as possible. But when he did get them, the onset was sudden and painful, especially the first two days—and they lasted for seven. His insides felt like they were burning up, and on top of the pain, he had to deal with nausea. Heats supposedly felt good when you had a partner to help you through them.

Richard wouldn’t know. He’d been on libido inhibitors since he was twelve. And while heat and sex were different things, he was the only omega playing in the NHL. He had to be careful, and that meant not letting anyone get close enough to know…

He was already under constant media scrutiny because he was captain of his team. And playing as an omega? Letting people know he had heats, period, was a risk. He’d heard it all before when he’d gone first in the draft:

A detriment to the team.

What kind of player has a hair trigger?

Can he even play?

He’d gotten the implant ages ago, had it updated every two years like clockwork, sucked up the pain, and pretended he was one of the lucky ones who didn’t go through heats at all.

On Communication and Enthusiastic Consent

One thing I am incredibly passionate about, which is a near-constant in my writing, is communication and continuous enthusiastic consent. I love highlighting it and making it part of a story. I think communication is a key factor in any healthy relationship and, for many people, a relationship includes sex. Even if a relationship is just sex-based, communication is important and consent is mandatory. Further, asking questions, “Is this okay?” “Is this something a character likes, or doesn’t?” “How would this character react to this?” helps me learn more about my characters. And hey--it’s erotica. My characters’ sexual preferences, sexual experience, hesitations, pleasures--that’s pretty important for me to know. And it’s pretty important for the characters to know that too.

I want to combat the myth that verbal and nonverbal consent is unrealistic and unromantic. When people know and trust each other there needs to be less “checking in,” but doing that anyway--that demonstrates a tenderness. “I want to make sure my partner is having as good a time as I am.” That’s one of the reasons why, in Different Dynamics, James tells Richard point-blank that he’s going to be checking in. They’re best friends and teammates and they trust one another implicitly. But James also recognizes that Richard is vulnerable, and wants to do his best to combat that and make Richard as comfortable as possible.


Tamir has the tendency to write feelings into everything, no matter how filthy. He’s not all that sorry about it. Visit him on his Website.