Review: THE NEXT COMPETITOR by Keira Andrews 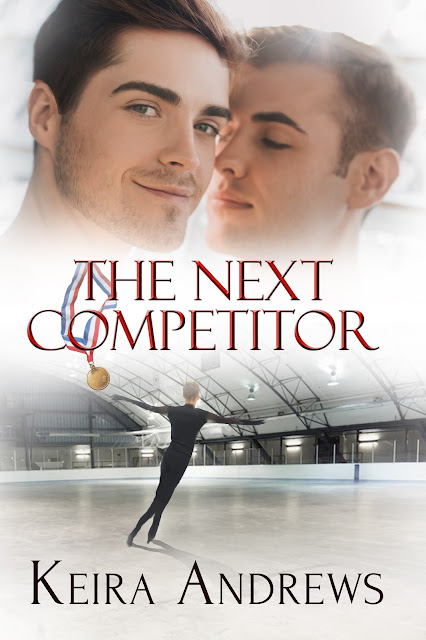 If he risks his heart, can he keep his head in the game?

To win gold, figure skater Alex Grady must train harder than the competition morning, noon, and night. He’s obsessed with mastering another quadruple jump, and due to the lack of filter between his mouth and brain, doesn’t have a lot of friends. As for a boyfriend, forget it. So what if he’s still a virgin at twenty? The Olympics are only every four years—everything else can wait. Relationships are messy and complicated anyway, and he has zero room in his life for romance.

So it’s ridiculous when Alex finds himself checking out his boring new training mate Matt Savelli. Calm, collected “Captain Cardboard” is a nice guy, but even if Alex had time to date, Matt’s so not his type. Yet beneath Matt’s wholesome surface, there’s a dirty, sexy man who awakens a desire Alex has never experienced and can’t deny…

I'll admit, growing up I was one of those people who would seek out the ice skating competitions on television, particularly during the Olympics, as I would be totally entranced seeing the skaters perform.  Now, not so much.  But a romance story between two male skaters set with the backdrop of making it to the Olympics?  You can bet I snagged this one right up!

It was interesting seeing a bit behind the scenes of what goes on in the competitive skating world, and it made for a nice bit of tension in this story.  With the pressure Alex and Matt are under, and the devastating emotions Matt comes to experience, the stage is set for some really intense interactions between the two-especially since Alex has almost no experience being with someone else, even at his age.  He's been so dedicated to his skating that there's been no room for anything else.

The two of them together go from barely cordial to acquaintance-like to downright naughty over time, so things between them don't feel rushed.  The chemistry is definitely there, and I really loved Alex and Matt as a couple.  Their intimate scenes are heated and intense, which is contrasted with their public interactions where they try to keep things between them quiet (each for their own reasons).  It does put strain on their relationship, which keeps the tension running high-particularly as the Olympics draw closer.  The fact that Matt and his family do not acknowledge his relationship "preferences" adds yet another level of stress, and is just another reason I was glued to this story as I read.

The Next Competitor was an excellent read for me, and my final rating is somewhere between 4 and 4.5 stars.  It's definite re-read material for the future.  I'd most definitely recommend this story to M/M romance fans (and if you're a competitive ice skating fan, even better!), and it is meant for readers 18+ for adult language and M/M sexual content.