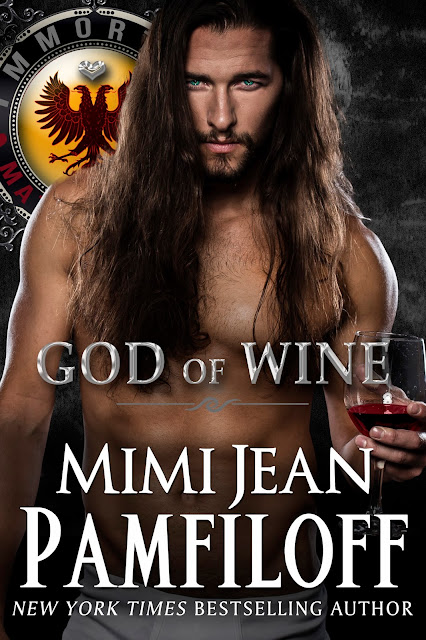 CAN ROCK-HARD ABS SAVE THE WORLD? HE SURE THINKS SO

Acan, the God of Wine and Intoxication, has been partying for over ten thousand years. And New Year’s Eve, when humans around the world succumb to his naturally occurring spike in powers, is his big night. Only this year, things are bit different.

A plague is sweeping the immortal community, and he’s turning downright evil. All those New Year’s bashes will turn into bloodbaths if he doesn’t stop it. Sadly, the only known cure is finding a mate, and he is a giant, rude, beer-bellied mess. Definitely not husband material.

But can a little gym-time and help from the pros at Immortal Matchmakers, Inc. turn him into a divine sex-machine? Absolutely!

So watch out, ladies! The God of Wine is lookin’ for love. And he has absolutely no clue what he’s doing.

Forgetty picked up her cell and began dialing.
“Who are you calling now?” he asked.
“Jill, how the heck are you?” Forgetty said with a bland tone, speaking to his assistant. “We’ve got a situation.” Forgetty listened for a moment. “Nope, Belch did not superglue himself to the Empire State Building again.” She listened and then laughed. “Ouch. Yeah. I forgot about that rope burn accident. But his junk appears to be intact and enjoying its usual fresh air.”
Belch grumbled at Forgetty, knowing that she and Jill were discussing the time Cimil dared him to walk a tightrope over the Grand Canyon. Blindfolded. A very bad choice because when he slipped, he hadn’t been wearing any clothes and…well, his balls took the first hit. He then fell to his death. Luckily, however, when a deity’s body was destroyed, they were sent back into the cosmos, where they could return to the realm of the gods—if they weren’t currently banned—or return to the human realm with a new body. The whole process usually took a few days since the gods depended on sacred portals (aka cenotes, aka underground springs) in the Mexican jungle to rebuild them one molecule at a time—very low-tech, but tried and true. Still, ruining one’s human shell hurt like a sonofabitch.
Forgetty continued her conversation with Jill over the phone. “Sadly, this is a serious matter. Belch has got to find his forever someone or he’ll turn evil and be locked up. I’m putting you in charge of keeping him sober.” A moment passed. “Hello? Hello?” Forgetty pulled her cell from her ear. “I think she hung up on me.” Forgetty dialed again. “Voicemail! Can you believe her?”
“Was going to fire her anyway. I think I’ve gone weeks without pants.” Oh well. Belch shrugged, feeling his throat dry out and hearing that frosty cold beer calling his name. “How about a beer to celebrate going on the wagon?”
“No!” His sister shook her finger. “And so help me, Belch, if you touch one drop of alcohol, I’m going to—”
Forgetty’s cell beeped, and she took a peek. “Cimil is calling an emergency midnight meeting at her office.”
“Wow. We’ve never had one of those before. Must be important.”
His sister gave him a look.
“What?” he asked defensively.
“You turning into a threat to humanity is important. And we just had an emergency meeting last week.”
We did? “You must’ve made me forget.”
“I’ve never used my powers on you, brother.”
Really? Because he could barely remember the last ten thousand years.
She added, “It’s also against our laws to do so without permission.”
“Then why’s it all a void?”
“Uhhh…because you’ve been wasted for more millennia than I can count. But not like you’ve missed much. A few near misses with the apocalypse. Cimil got married to Roberto, the king of vampires, and had evil half-vampire, half-divine quadruplets, and…a bunch of the other gods got married. Even Votan has a son.”
The God of Death and War is a father? I definitely need to drink a keg. ASAP. “When did this happen?”
“Over the last couple of years.”
Gods. He’d only been sober for two minutes and already realized how much he’d missed.
He looked at his sister and blinked hard. Whoa. That’s what she looks like?
Mistaking his expression for despair, Forgetty reached across the bar and squeezed his hand. “Do not worry, brother, we’ll figure this out.”
“No. It’s not that.”
“Then what?” she asked.
“I always thought you had four eyes and two heads.”
“Ha. Funny.”
“Who said I was joking?” He really wasn’t.
“All right. I need to finish getting everything ready for tonight’s party.”
“Oh, is it ladies’ night? I love ladies’ night.” Just last week, he’d gone home with five women, who pleasured him all night long. That was the nice thing about being a deity—women found them irresistible. Their scent, their hypnotically sexy turquoise eyes, the divine energy wafting from their bodies. In his case, his very large c*ck was also a nice chick magnet. There was never a shortage of admirers. The only downside was that a god’s energy could kill a person—fry their brain—if the god didn’t make them wear a very special black jade to help absorb their potent powers. He personally had a lovely collection of black jade bracelets back home.
You mean the taco truck?
Oh yeah. Burned down my house. He’d have to go shopping tomorrow for a new house. Maybe I’ll go big this time and buy a bouncy castle.
“Well, I’m ready to help welcome the women.” He rubbed his hands together.
“You’re getting locked in the closet until I leave for the meeting,” said Forgetty.
It was only eleven in the morning. “No. I’m not.” He defiantly took a seat on the stool again.
She reached out and grabbed his arm. “Acan, listen to me. The party is over. And you need to grow up. Your reckless teen years are over.”
Grow up. Grow up? I’m the party god and this party ain’t ever gonna end!
“Are you going to serve me or not?” he growled.
“Not.”
“Fine.” He rose from the barstool, his bare ass making a qwiiip! sound as it peeled off the vinyl cushion. “I’ll see you at Cimil’s office.”
“Hey! Where are you going?” his sister yelled as he headed for the door.
“To do what I do best!”
“Belch! Dammit! No more partying!”
Screw that. If he had to find a mate, he wanted one who knew how to throw down and worshiped at the altar of wine like he did, not some teetotaler. Going to find myself a real woman. Fit for a god. 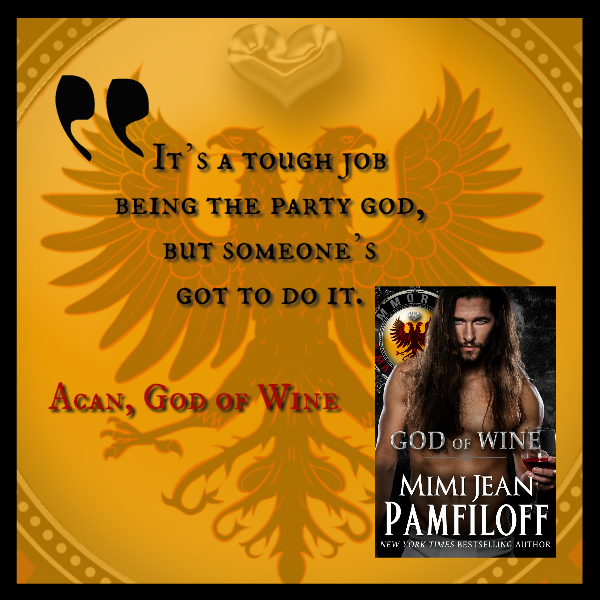 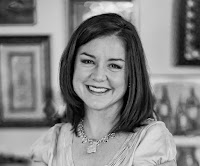 MIMI JEAN PAMFILOFF is a USA Today and New York Times bestselling romance author. Although she obtained her MBA and worked for more than fifteen years in the corporate world, she believes that it’s never too late to come out of the romance closet and follow your dream. Mimi lives with her Latin Lover hubby, two pirates-in-training (their boys), and the rat terrier duo, Snowflake and Mini Me, in Arizona. She hopes to make you laugh when you need it most and continues to pray daily that leather pants will make a big comeback for men. 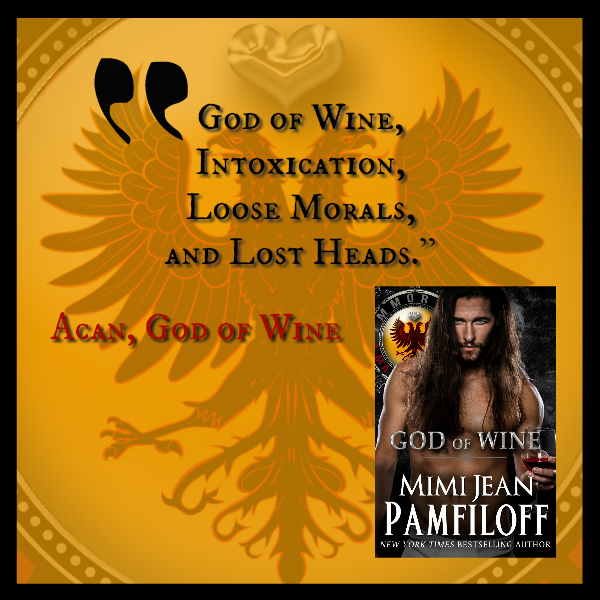