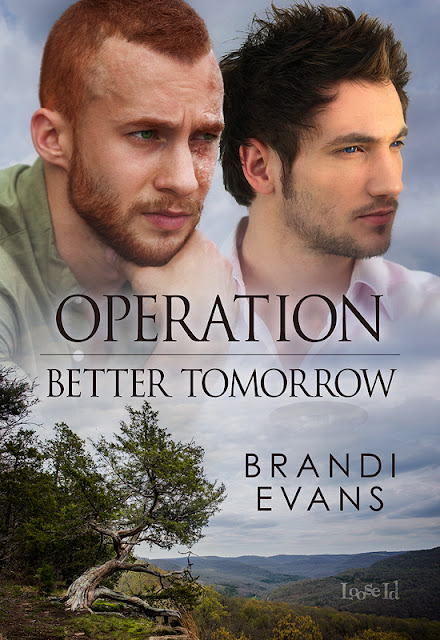 The interview of a lifetime.

When Aaron Strickland’s assigned to write a feature article on Caleb Douglas, the first openly gay soldier to receive the Medal of Honor, he’s over-the-moon. Meet a sexy, real-life hero? Yes, please. And in the weeks leading up to their interview, the former soldier becomes a recurring player in Aaron’s fantasies.

Years earlier, lost in the throes of depression and PTSD after an ambush left his body and soul scarred, Caleb was on the brink of giving up when a magazine article changed his life forever—an article written by Aaron. Emerging from the depths of his pain, Operation Better Tomorrow—part homestead, part halfway house for those down on their luck—was born.

Tragedy lurking on the horizon.

As the days pass, Caleb and Aaron’s tragic pasts bind them in ways they aren’t prepared for, but it also leaves them vulnerable. Pushing forward means breaking down walls they’ve built to protect themselves, and just as they’re poised on the precipice of happiness, a darkness descends on the homestead, a hatred that will leave one man clinging to life and the other willing to risk everything to save him.

Resisting the urge to follow Aaron, Caleb unlatched the wicker picnic basket from the left saddlebag, grabbed the thick blanket from the right, and traipsed deep into the waist-high colors. Blues, purples, and yellows dotted the greenery and swayed in the late-summer breeze. The meadow smelled sweet and made him think of peace and tranquility. The area, along with Aaron’s article and daily meditation, were the best anti-depressants Caleb had ever had.

He set the basket and Aaron’s bag down and unfolded the blanket. Considering the height and density of the flowers, laying out the cloth was an exercise in frustration management. A step-and-tug here, an expletive or twelve there, he inched the material down until he created a makeshift hideaway.

Before taking his seat and disappearing into the overgrowth, he glanced around until he found Aaron. The other man was zoomed in on a yellow bud, and Caleb smiled. He liked the idea of sharing this place with Aaron. It was the perfect backdrop to delve into his pain.

He unclipped his walkie and set it on the corner of the blanket before dishing food onto the thin, floral plates that had come with the basket. Thick turkey sandwiches with blue cheese and fresh tomatoes, fruit salad, and oven-baked green bean crisps—green beans drizzled with olive oil, salted, peppered, and then baked until they were crispy. To complement the meal, he’d chosen a Château Timberlay Bordeaux. It wasn’t a full-on red, but it had a deep, lush flavor he really liked.

He uncorked the bottle, removed one of the wineglasses fastened to the inside of the—

Caleb froze, Aaron’s soft command triggering an ingrained response from his Army days. When a commander told you to freeze while on patrol, you f*cking froze. Period.

No debate. You obeyed or you could die. But what danger was there out here? Had the other man seen a snake or something?

Caleb turned toward Aaron’s voice as the other man emerged from the flowers and crawled onto the blanket in an awkward “three-legged” motion, holding out his camera. Blades of grass and broken flower petals stuck in his perfectly messy hair, and his smile was eight times more breathtaking than any Caleb had ever seen. The intensity, the passion on Aaron’s face, matched what was stirring inside him.

Aaron settled beside Caleb and held the camera so they could both see the screen on the back, but Caleb couldn’t take his eyes off the man beside him, watching Aaron as he looked at Caleb’s image on the screen. The pleasure on Aaron’s face, as cliché as it was, stole Caleb’s breath, and when Aaron turned his head, Caleb captured that incredible mouth in a quick, hard kiss.

Caleb pulled back and drew his thumb over the bottom lip he’d just claimed. “Thank you.”

Aaron’s eyebrows drew together. “For what?”

“Just…thank you.” Caleb tapped his lips to Aaron’s again and then forced himself to pull back before the moment spun out of control. He wanted Aaron, but doubt was malevolent, constant. The idea of exposing himself at all was terrifying, but here, in the open, in the light of day, it positively petrified him. Not out here. Not like this. But if ever there was someone to take a chance on…

Can I just say right off the bat how much I loved this story?  And anyone who knows me or has read many of my reviews will know exactly how that will translate to my star rating if I'm telling you that here at the beginning.

These characters...written so perfectly-flawed, damaged, caring, protective, intelligent-and I mean BOTH main characters.They both have their own past pain, though Caleb's pain is not hidden-everyone knows what happened to him, if not all the additional, more personal details.  The more I found out about his whole story-and Aaron's as well-the more deeply both men burrowed into my heart.  While the two did not physically meet until the point this story begins, they both know of each other already and each have their own thoughts and feelings that have developed based on what they know and have read of each other.  You might think that this is not something to base anything off of before two people meet, but Caleb and Aaron's initial feelings are spurred by things that have already touched them in a personal way.

That groundwork-however thin it may be-is the spark that virtually explodes once the two meet in person.The intensity between the two men is palpable, and their chemistry is so far off the charts that I think the charts need to be redefined.  That chemistry translates into some scorching sex scenes, filled not just with incredible physical connection but pure emotion as well.  Even Caleb and Aaron's non-physical scenes are highly charged...the two are the ultimate definition of soulmates and even from very close to the beginning of the story I could not picture the two apart.  For me, this made for a riveting read and I did not want to put this book down for even a second.

The supporting characters added quite a bit to the story.  Hands down favorite for me?  Caleb's mother, Aubrey.  What a firecracker that woman is-speaking her mind and so caring and thoughtful.  It's easy to see where Caleb got much of his personality, and I can't say enough how supportive of him she was.


Operation Better Tomorrow is one of my favorite reads of 2016, a wonderful 5-star read, and has definitely earned a place on my top recommendations list.  I highly recommend this story to ANY romance fan, in particular M/M romance fans, especially if you love a highly emotional, intense read.  This story is meant for readers 18+ for adult language and M/M sexual content.

Brandi Evans was raised by a caravan of traveling Gypsies. She spent her days learning the ways of her people and her nights lost in legends as old as time. Okay, not really, but that's way more interesting than the truth!

In reality, Brandi grew up the oldest child of an ordinary family. Grade school, middle school, high school. Nothing extraordinary happened until she left the nest. She joined the military, went to college, got married, and became a mom. And somewhere along the way, she discovered she liked to read—and write!—stories hot enough to melt eReaders.

These days, she calls The Natural State home where she lives with her hubby, two beautiful daughters, two dogs and a cat who has yet to realize she doesn’t own the place. Soldier. Wife. Mom. Multi-published smut writer. Brandi's life might not be "traveling Gypsy" interesting, but she's had fun. And in the end, isn't that all that really matters?