We're thrilled to have author Jessie G here today at Making it Happen with an exclusive guest post!  Find out why we're such huge fans of her books in her holiday scene below...

Every year I tell myself that I won’t write a holiday scene. I don’t know why I lie to myself this way because I really do love the revelry of the holidays, but there you have it. I perpetrate this lie and then suddenly see a request for December blog posts and I’m all hand-raised-pick-me so I can write you a holiday scene. And who better to star in it than my guys from the Devils Pride MC, just to herald in their latest stint in Kindle Unlimited?
Also, both the current books in the series will be going on a Kindle Countdown sale which means you can pick up Tricking Chase for just $0.99 on December 22nd, and Talk Dirty to Me for $0.99 on December 29th. So, you can try them in KU and if you love them as much as I do, you can buy them for your collection because they won’t stay unlimited forever.
Enjoy - Jessie G 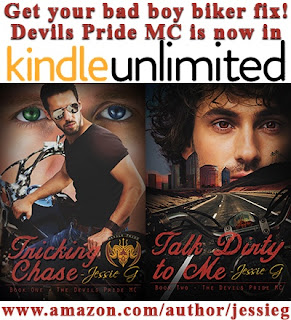 © 2016 Jessie G Books, Inc. Unauthorized use and/or duplication of this material without express and written permission from the author is strictly prohibited. Excerpts and links may be used, provided that full and clear credit is given to Jessie G and Jessie G Books, Inc. with the appropriate and specific direction to the original content here at Making It Happen Book Blog.

Thank you so much Jessie G for stopping by the blog today!  We love this holiday scene featuring our favorite characters from the Devils Pride MC, and can't wait to read more in the future!
Email ThisBlogThis!Share to TwitterShare to FacebookShare to Pinterest
Labels: Christmas, gay romance, guest post, Jessie G., M/M