Guest Post: Eva LeNoir-DISHEVELED, DISARMED, and So Much More!

Hello lovelies!
My name is Eva LeNoir and the lovely Carra has invited me to join you here to talk a little about myself.
I write a little bit of everything from Paranormal to M/M with a little bit of Contemporary to boot. The common point between all of my books is the hint of humor that I throw in. And sarcasm. Can't get sassy without a good dose of smart-ass-ness.

Today, I wanted to talk to you about Disheveled and Disarmed. The #UCC Saga is very close to my heart because it started out as a chat conversation between my friends and myself. You know the ones...Someone says something completely off the wall, we all react, laugh and comment, "That should totally be in a book." Well, each of my characters is loosely based on one of my friends. We have Delilah in Disheveled who is looking for her happily ever after and in our chat we talked about first dates gone wrong. Bam! Then we have Jade in Disarmed. She's too much to handle so one Dom isn't enough, she actually needs two of them. Then we'll have Ruby, she's in the next book Discarded. She's the character that unites them all since she's the Madam of the Lounge. 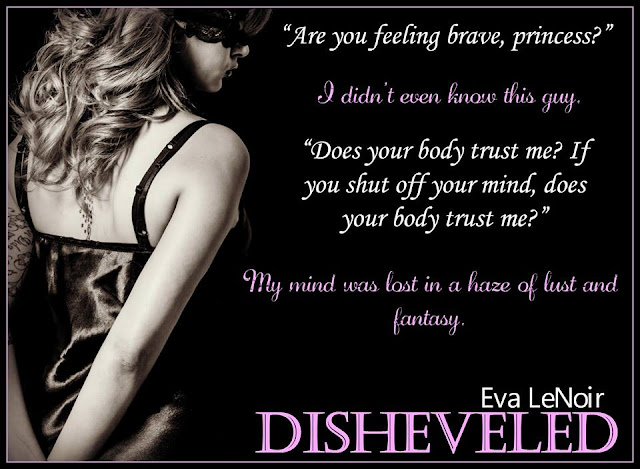 That's right...the book is set in Washington D.C and the girls all get together once a week to share drinks and stories at Ruby's Lounge: The best kept secret in D.C aka, the high-end brothel. You will also meet Bethany, the Domme and Avalon the sex therapist. Let's not forget our own Callie who is already married and going on five kids (her husband is the stuff legends are made of ;) ) Oh...the lovely Layla will have an incredible story to tell all the while Emmeline writes it all down.
This series is about friendships, love and a good laugh.
And sex. Yes, I love to write naughty scenes and my books are filled with them...or so I'm told! 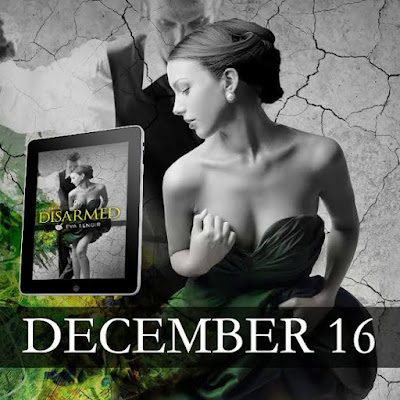 December 16th, I released book 2. Jade's book is Disarmed where we learn that sometimes a sub needs to have her emotional boundaries pushed in order to give her the freedom she deserves.
Every story has its own HEA but it would be wise to read them in order since the common thread runs throughout the series and I love to tease my readers about the upcoming characters.
Just a little, I promise.
I'm not cruel...much. 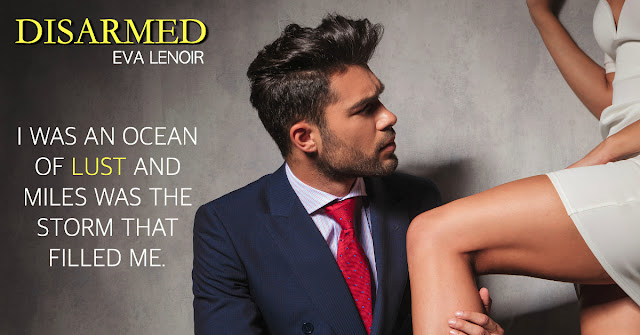 Now, if you like Paranormal, I have an ongoing series of shorts about vampires, shifters and witches...oh my!
The scene is set in Maine in an underground fighting arena where the main character is a female vampire giving it her all to win the championship title.
MMA...check
Vampires...check
Heat factor...check
That's right...she's a badass! 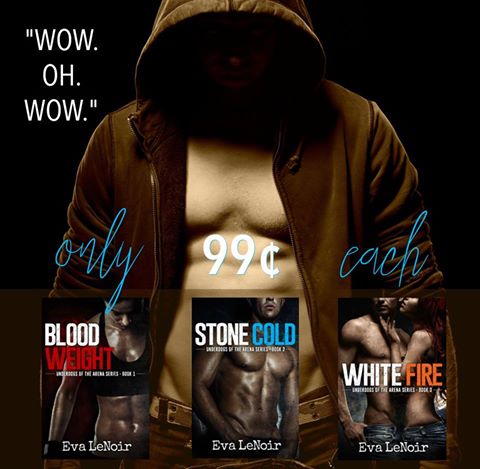 And then there are the M/M books.
Now, these stories are not for the faint of heart. Andrea Smith and I wrote these books on a whim. Again, we were chatting and laughing so hard at the prospect of writing about two arrogant jerks that we couldn't just ignore the call of the story.
That's how Larson and Troy were born. They are crude, cocky and so over the top that we were afraid they may be forever unlikeable. But thankfully, we were able to make them see reason. It wasn't easy but we won that battle.
Larson is an author who thinks he's invented the written word and Troy is a renowned reviewer for the Bluffington Gazette who believes he's the next best thing since the Ten Commandments. Together? It's alpha central with a lot of laughs. 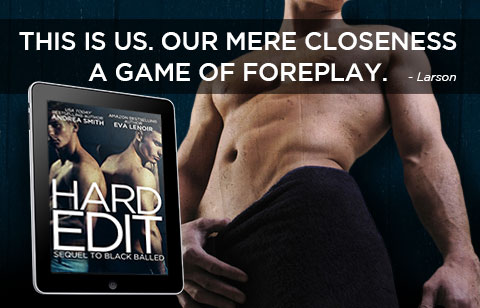 So, if any of these books sounds good to you, feel free to try them out. If not, that's okay too :)
Also, feel free to stalk me. I'm a big fan of stalkers!
Thank you Carra for having me, I hope I was interesting enough LOL!
Have a beautiful and fruitful day, ladies and gents,

Thank you so much Eva for stopping by today!  We're a big fan of Eva's books, check them all out below: 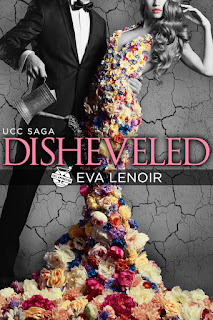 Delilah Jameson has the perfect life. A great job in her downtown DC art gallery, a group of girlfriends who will always have her back and Cole; her friend-zoned roommate.
Yet, there is something missing; a man she can truly call her own.
When online flirting with a complete stranger awakens Dia's sexual curiosity, how far will she go in order to find her happily ever after?
Amazon - Barnes and Noble
Goodreads 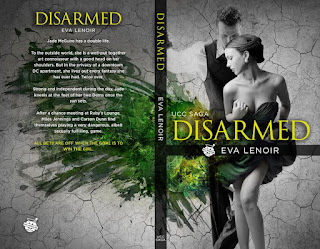 Jade McGuire lives a double life.
To the outside world, she is a well-put together art connoisseur with a good head on her shoulders. But in the privacy of a downtown DC apartment, she lives out every fantasy she has ever had.
Twice over.
Strong and independent during the day, Jade kneels at the feet of her two Doms once the sun sets. After a chance meeting at Ruby's Lounge, Miles Jennings and Carson Dunn find themselves playing a very dangerous, albeit sexually fulfilling, game.
And all bets are off when the goal is to win the girl.
Goodreads
~~~~~~~~~~~~~~~~~~~~~~~~~~~~~~~~~~~~~

Underdogs of the Arena 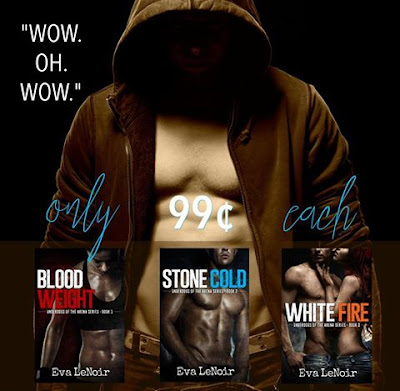 All available in Kindle Unlimited!

Bloodweight
As a young independent vampire, Ellen Banks takes the ring, and all eyes are on her. The lithe rebel has worked hard to get to this one moment in her less-than-stellar life. No one will stand in her way of that championship belt, especially not the powerful and impossibly salacious Nash Stanford. If only her traitorous body’s reaction would shut the hell up.
Amazon
Goodreads

Stone Cold
Heated one night sessions between the sheets, the handsome yet arrogant Jared Stones spends his days training Ellen Banks. When a blast from the past appears, unannounced and more importantly uninvited, all hell breaks loose.

Sister to the Alpha of her pack, Sloane Pierce is convinced by long time friend, Ellen that her presence is required. Every one of her primal instincts warns of that outcome, deadly at best. Unable to say no, she is dragged by a wild and forceful fate that has other ideas. Is destiny on their side or will history repeat itself like all the other times.
Amazon
Goodreads

White Fire
As the attacks continue against Nash Stanford and the members of his underground arena, one key element to the mystery suddenly disappears.

Kyle Pearce finds himself in an unknown location and in the presence of an unknown female when he wakes from a dreamless sleep. But as the pieces of the puzzle slowly come together, he is faced with an unrelenting desire for his sweet, caring and simply amazing kidnapper. One problem, she is not a shifter, she is not a wolf.

Aishlyn O’Shea had been raised to follow her father’s instructions to the tee…until now. Completely enthralled with the alpha that now resides in her home, she fights the onslaught of dark desires that seem to attack her every nerve ending. Unfortunately for her, Kyle Pearce is forbidden fruit, no matter how much she yearns to sink her teeth into his delectable flesh.

How can there ever be future together for this unlikely couple when the obstacles keep piling up against them?
Amazon
Goodreads 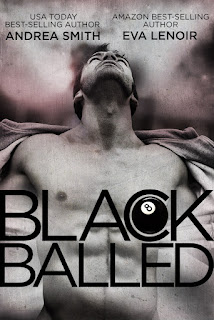 Two dominant males, two worthy adversaries, in a business that takes no prisoners, will soon learn that fate refuses to be ignored . . .

My name is Troy Babilonia, but I'm best known as Babu, a renowned literary critic with my own online column. I'm followed by thousands! I'm a living god in the literary world. I have no filter, and for that, my flock of humble followers are forever grateful. If it weren't for me, they wouldn't know what to read. I have zero tolerance for the weak-minded attention seekers, nor do I have respect for the self-proclaimed geniuses of the Indie world. My advice to all Indie authors is to never break the cardinal rule in this cut-throat business. Ever.

My name is L. Blackburn and I'm an Indie author. My extraordinary genius was loved and worshiped throughout the literary world, until one egocentric critic tried to obliterate my career. It seems I broke some "cardinal rule," and now I'm paying the price for it. But I don't plan on going down without a fight.
Sexual Content. M/M - Graphic Sexual Situations
Amazon - Audible
Goodreads 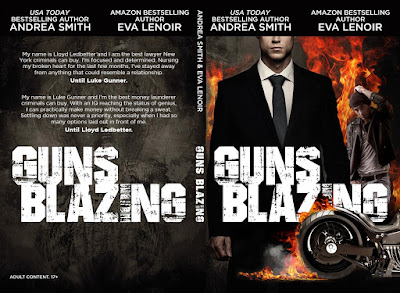 My name is Lloyd Ledbetter and I am the best lawyer New York criminals can buy. I'm focused and determined. Nursing my broken heart for the last few months, I've stayed away from anything that could resemble a relationship.
Until Luke Gunner.

My name is Luke Gunner and I'm the best money launderer criminals can buy. With an IQ reaching the status of genius, I can practically make money without breaking a sweat. Settling down was never a priority especially when I had so many options laid out in front of me.
Until Lloyd Ledbetter.
Sexual Content. M/M - Graphic Sexual Situations
Amazon - Audible
Goodreads 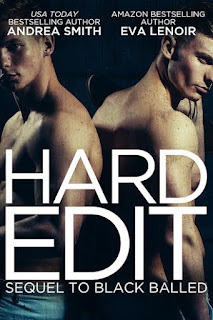 It's all fun and games until egos get hurt.
After a year of a seemingly happily-ever-after, Troy Babilonia throws a curve ball that smacks Larson Blackburn right in the head.  When Troy's debut novel, "Bridge to Lonely," threatens to overshadow Larson's own success, inviting a past shadow into the light of their present, the two alphas must learn to adjust.
"Bridge to Lonely" has garnered an unexpected success both in the literary world and in the film industry, forcing Larson to accept that he is not the only successful author in the building. But as Troy's old flame decides to make an appearance, the two alphas are forced to test the strength of their love.  Let the battle of the egos recommence; where sarcasm is the preferred weapon, and the testosterone levels go beyond the boiling point.
Because Black Balled just wasn't enough...Smith & LeNoir bring you Hard Edit.
Adult Content
18+
Amazon
Goodreads

You can find Eva here: