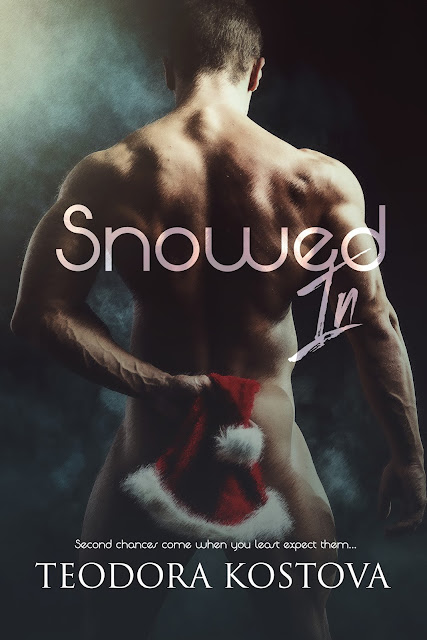 Be careful what you wish for...

Nate has been in love with Quinn, his brother’s best friend, for as long as he can remember. But when he finally gets the chance to show Quinn how he feels, his heart gets broken in the most unexpected way.

Second chances come when you least expect them...

Quinn doesn’t believe in miracles, especially not Christmas ones. When he decides to win Nate back he knows it won’t be easy. The last thing he expects is a health scare, a road trip and a vicious snow storm to work in his favor.

In the end, a cabin in the woods turns out to be not only the shelter they desperately need, but also Quinn's very own Christmas miracle.

Sometimes, to forgive, you need to get snowed in… Nate could hear the cruelty in his tone but he didn't care. He’d never been this angry in his life, and if Quinn wasn’t here to face the mess he’d caused, Nate was going to use the next best thing – the traitor who’d chosen him over his own brother.

“I didn’t know any of that,” Brandon said, his eyes softening. He reached for Nate, but Nate whipped his hand away, taking a step back.

Angry tears prickled behind his eyes, making him feel humiliated even more. Spinning around on his heel, he ignored Brandon's voice calling him back and stomped into to his room, slamming the door.

He didn’t make it to the bed. The anger, grief, and loss he’d felt overwhelmed him and Nate slumped to the floor, a ragged sob tearing out of his throat.

I hope one day you can forgive me...

Not a chance in f*cking hell.

The Story:
This is the first book I've read/listened to by this author, and now I find myself wanting her entire backlist ASAP.  I loved the characters and story here in Snowed In, and I've already listened to the audiobook twice!  It's a fantastic friends-to-more, brother's best friend, second chance romance that should be in every M/M romance fan's library.

Poor, sweet Nate.  I fell in love with him from the start-it really was kind of hard not too.  His character is so innocent and likable, and I was so mad at Quinn for how he treated Nate after the first time they were together.  Even later on when we find out why, I still wasn't really ready to forgive him...but then again, I'm not Nate.  Quinn tries to stop things between them the first time around, but gives in and instead winds up hurting Nate terribly.

When the two see each other again several years later, I was totally supporting of Nate and his attitude toward Quinn...but I was also still holding out hope for them as they were really wonderful together that first time.  I wanted to see Quinn redeemed, and see them both finally get what they really want.  It's a rocky road to get there, and in the end we get to find out exactly what happened to make Quinn leave the first time.  I did not agree with him at all about not telling Nate what was going on, and I was also a little peeved at Nate's brother Brandon...at every step I was firmly on Nate's side (can you tell he was my favorite character?).

In the end, I was very happy with how everything turned out, and Snowed In wound up being a 4.5-star read for me.  M/M romance fans will love this story; it is meant for readers 18+ for adult language and M/M sexual content (which oh-by-they-way is so very hot!).

The Narration:
I really liked Dan Rider's narration.  I thought he voiced the characters quite well, giving each their own distinct voice and keeping them consistent throughout the story.  He did an amazing job with Nate and his emotions, and I was totally pulled in to the story through his voice.  I look forward to listening to more of his work in the future...5 stars for the narration! 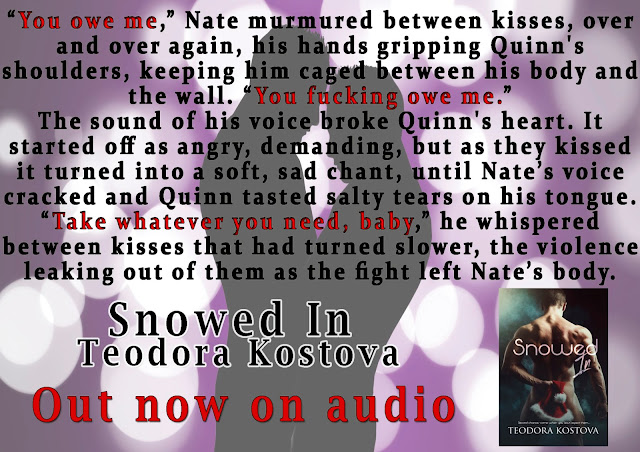 **GIVEAWAY: for a chance to win 3 x Snowed In audiobooks, 3 x Snowed In ebooks, 1 SIGNED Snowed In paperback (International) and a $5 Amazon giftcard!!!

Hi, my name is Teodora and I live in London with my husband and my son. I've been writing ever since I can remember, but it became my full time job a few years ago when I decided that everything else I've tried bores me to death and I have to do what I've always wanted to do, but never had the guts to fully embrace. I've been a journalist, an editor, a personal assistant and an interior designer among other things, but as soon as the novelty of the new, exciting job wears off, I always go back to writing. Being twitchy, impatient, loud and hasty are not qualities that help a writer, because I have to sit alone, preferably still, and write for most of the day, but I absolutely love it. It's the only time that I'm truly at peace and the only thing I can do for more than ten minutes at a time - my son has a bigger attention span than me.

When I'm procrastinating, I like to go to the gym, cook Italian meals (and eat them), read, listen to rock music, watch indie movies and True Blood re-runs. Or, in the worst case scenario, get beaten at every Nintendo Wii game by a very inventive kid.

Don't be shy and get in touch - I love connecting with my readers.

December 14th - All in One Place