Spotlight-Excerpt: THE MEDDLERS OF MOONSHINE by A.E. Decker (Moonfall Mayhem #2) 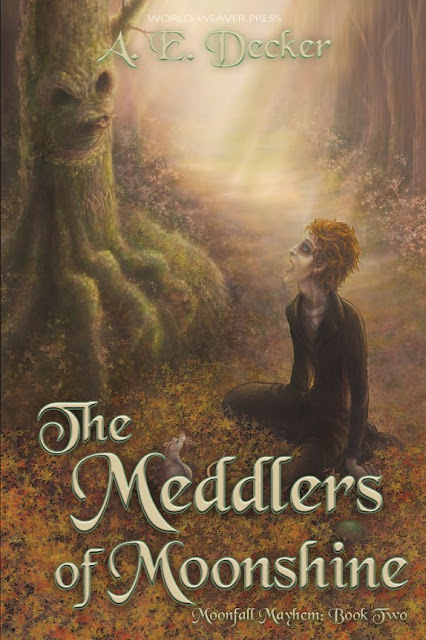 
Something is rotten in the town of Widget, and Rags-n-Bones knows it's all his fault. Ever since he snitched that avocado from Miss Ascot's pack, things have been going wrong. Armed with a handful of memories he never realized he had, Rags-n-Bones searches for a way to put right whatever he did to Widget in the past. If only he knew what it was! Unfortunately, the only person who seems to have answers is a half-mad youth that only Rags can see.

Widget is also suffering from a ghost infestation that has the townsfolk almost as spooked of outsiders as they are of actual spooks. While Rags-n-Bones seeks answers in the past, Ascot offers the town leaders her service as an exorcist, only to be handed an ultimatum: banish the ghosts or be banished herself!

Who's meddling with Widget? To catch the culprit, Ascot and Rags-n-Bones must match wits with a shifty sorcerer, a prissy ex-governess, and a troublingly attractive captain before the town consigns itself to the graveyard of history.

Excerpt
There was a hand in the forest, and it held an avocado.

“Miss Ascot bought it for me,” said Rags-n-Bones, clutching it to his chest as he ran. The dead leaves crunched softly underfoot, thick and bouncy as a crispy cloud. “That means it’s not stealing.”

On his shoulder, Nipper squeaked. Being a rat, Nipper was hazy on the concept of “stealing.” Generally, he felt if you could get something in your mouth, it was yours.

Rags-n-Bones wished he were a rat. It would make dealing with guilt much easier. I should never have rummaged through Miss Ascot’s pack, he thought, ducking around a birch. His thumb caressed the avocado’s soft, pebbly skin. If I’d waited, she, or the Captain, or Sir Dmitri, or the Mighty Terror from the Deepest Shadows would’ve awakened and given it to me. He leaped over a log, mouth watering in anticipation of the avocado’s rich, buttery flavor. I should go back right now and—

Rags-n-Bones gave up. He’d take whatever punishment arrived later. Right now, the torment of not eating the avocado was too great to bear. “There’s a grove up ahead,” he replied. “Around that cone-shaped boulder. We’ll eat it there.” Avocados required privacy for proper consumption.

How could you possibly know there’s a grove ahead? asked a small part of his brain not drunk on avocado-lust. You’ve never been here before.

He shrugged. Ahead just seemed like a convenient place for a grove. A small circle of beech trees, with an old oak smack in the center, its gnarled, moss-covered roots gripping the hummock it sat atop like an old man clutching a tea cake.

A foot skidded out from under him as he rounded the boulder, kicking up a trail of wet leaves and the smell of tannin. That’s a lot of detail for a mere hunch. Why, you can visualize the oak, can’t you? That thick, knobby trunk. Those bare, crooked branches. And carved into the bark—

Six feet into the grove, Rags-n-Bones stumbled to a halt and stared vacantly at a patch of earth. Something was very wrong. Was he being watched?

He whimpered. He was being watched. A disapproving stare pressed almost tangibly on the top of his bowed head. Branches swayed creakily overhead. He watched the wind skitter a fallen acorn across the carpet of leaves.

Squeak? Nipper scrabbled at his cheek.

I have to do it. Slowly, Rags-n-Bones lifted his gaze to meet the watcher’s.

The avocado hit the leaves with a soft crunch as his fingers abruptly slackened. Punishment had arrived sooner than expected. 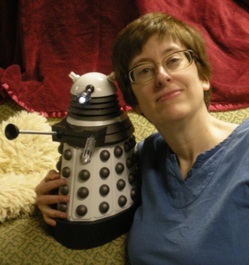 A. E. Decker hails from Pennsylvania. A former doll-maker and ESL tutor, she earned a master’s degree in history, where she developed a love of turning old stories upside-down to see what fell out of them. This led in turn to the writing of her YA novel, The Falling of the Moon. A graduate of Odyssey 2011, her short fiction has appeared in such venues as Beneath Ceaseless Skies, Fireside Magazine, and in World Weaver Press’s own Specter Spectacular. Like all writers, she is owned by three cats. Come visit her, her cats, and her fur Daleks at wordsmeetworld.com.