Release Blast-Excerpt & Giveaway: BETWEEN LOVE AND LOYALTY by Shannyn Schroeder

Between Love and Loyalty
By: Shannyn Schroeder
Releasing October 18, 2016
Self-Published 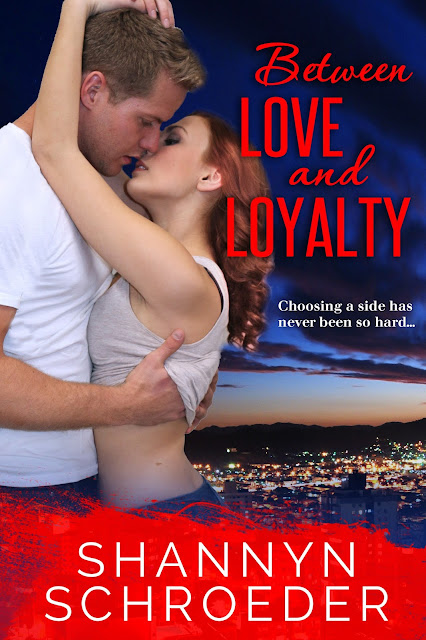 When at war, aim for the heart…
Connor Duffy is desperate. His tell-all book on corrupt Chicago alderman Brady Cavanagh isn’t telling enough to get publisher interest, and in order to get the hot dirt, he must find a way to get closer to the man who let Connor go to prison to cover for his own son’s misdeeds. So when fate puts Cavanagh’s lively, artsy daughter across Connor’s path, he decides to take advantage of the first bit of good luck he’s had in a long while.

… but don't forget to keep your own under guard.

Fiona Cavanagh needs a break. Between assisting with her father’s political campaign, trying to please her unpleasable mother, and dealing with an ex who won’t go away, she has no time for a life of her own. One night she meets sexy and mysterious Connor and everything looks like it’s about to finally turn around… until she discovers that the one man she thought she could love was using her to get to her father. As dark family secrets unravel around her, Fiona finds herself caught between love... and loyalty.

Fiona Cavanagh buried the sharp blade deep into the slab of clay, and tried desperately to not think of her mother.
“Ooo… someone’s in a bad mood.”
Fiona lifted her head and looked at her friend Sarah, who was also her boss. “Who says I’m in a bad mood? I only get to do longer projects with the kids when they’re here on the weekend. There’s not enough time to work in clay after school.”
Sarah snickered and walked into the room. “You only want to work in clay when you’re pissed off.”
She said it as if it was a no-brainer. And since Sarah had known Fiona for years, it probably was.
Rather than acknowledging the fact that Sarah was correct in her assessment, Fiona continued to hack the block of clay into smaller pieces for the kids.
“Your mom?”
Fiona grunted assent.
“What did she do this time?”
Putting the knife down, Fiona stared at her. “She spent the morning pointing out that if I had stayed with Patrick, my father’s career would be in better shape. As if it’s my fault my ex is running against my dad.”
“Your dad has been alderman for two decades. It’s a lock.”
Fiona blew at the curls that escaped her ponytail. “It should be, but ever since the latest polls, Patrick has been trying to turn this into a smear campaign, accusing my dad of sitting on his laurels. He talks about how change will be good for the city. How it’s time to infuse some new blood in order to make the city better.” She toyed with the knife. “My dad has been working his ass off for years to make Chicago better. He’s fought for all kinds of improvements and Patrick makes it sound like Dad’s been twiddling his thumbs and collecting a check.”
“How is that your fault?”
“I broke up with Patrick. If I had played nicer and clung to him a little longer—like until after the election—he wouldn’t be gunning for my dad’s job now. She only ever saw how we looked on paper. She never wanted to listen to how I felt. Plus, I broke up with him over a year ago, but she acts like it was last week.” Although Fiona had believed she’d loved Patrick, everything with him had been superficial. No wonder her mother liked him so much.
Fiona refastened her hair and grabbed her blade. She cut a few more chunks of clay, hoping it would be enough for the kids who would give up their Saturday to work on art with her.
“I’m sorry, Fi. I had no idea things were rough. I don’t follow city politics, except for the mayoral election. And I definitely don’t follow the aldermen who aren’t in charge of my ward.” Sarah squinted. “I’m not even sure who my alderman is. I should probably know that, right?”
Fiona always paid attention to elections having lived in politics most of her life. Her dad ran the first time when she was still in elementary school. It didn’t take long before he learned the ropes of Chicago politics and became the man people either loved or hated. But she knew his true colors. This was the first election she’d be able to vote for him and her vote would actually count. In the past, his win had been guaranteed.
“I’ve worked so hard on his campaign this year, but it’s never enough for her. I’ve knocked on doors and made countless phone calls, but Mom’s biggest concern is my wardrobe and how I look in the media. Don’t I know better? Image is everything.”
Sarah burst out laughing. “I know you hate when I say this, but you sound just like her when you do that.”
Even Sarah’s smile couldn’t lighten Fiona’s mood. Fiona organized the chunks of clay on separate trays.
“Why do you let her get to you?”
“I don’t know. Sometimes, I feel like she’s right. She’s been way deeper into this than I have, so she might know what she’s talking about. I don’t want be to be the cause of any problems.”
She’d watched her brother Aiden do nothing but cause trouble growing up. How he’d managed to become a productive adult still puzzled her.
“Can I do anything to help?”
“Find me someone to fall in love with? Someone to take my mind of politics and appearances.”

Shannyn Schroeder is the author of the O’Leary series, contemporary romances centered  around a large Irish-American family in Chicago and the Hot & Nerdy series about 3 nerdy friends finding love. Her new series (For Your Love) will release this summer with the first title Under Your Skin. When she’s not wrangling her three kids or writing, she watches a ton of TV and loves to bake cookies.


Rafflecopter Giveaway (a $10 GC to Amazon or B&N (winner’s choice), a signed print copy of Under Your Skin (For Your Love #1) US only, or digital copy of Hot & Nerdy 2 Anthology)