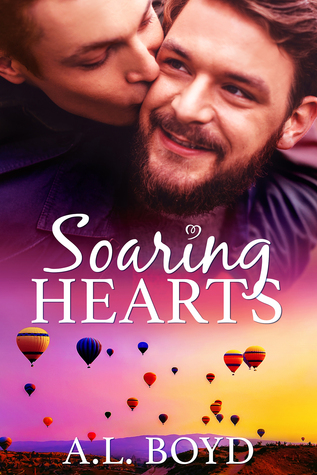 Will hearts soar when pigs fly?

Alex’s job working for his family-owned radio station once took him all over the city reporting on major events—until the accident. His scars, both physical and emotional, cause him to withdraw into a self-imposed, semi-reclusive lifestyle. When his dad requests that he go to the world’s largest hot air balloon festival, he has to find the courage to break his isolation. Now he needs to find the courage to trust and love again.

Jeff had already been planning a move to Albuquerque when he lost his home, parents, and dog to a wildfire in California. To begin his new life, he agrees to help his sister and brother-in-law with their balloon at the Albuquerque Balloon Fiesta. Now he’s seen pigs fly and bees kissing, but will he find the love he’s been searching for?

Amazon US | Amazon UK | ARe | Barnes and Noble

The morning glow ended once the skies lightened up, and the pilots prepared for the mass ascension. He moved back to the outer edges of the field to get a better view and to reduce the noise levels on his sound bites. Well that’s what he said when people asked, but really, he needed to get out of the crowds before they started staring again. It was easier in the daylight to deal with people one on one instead of in the big crowds. Invariably, someone’s kid would pipe up and say something about the large scars running down his neck.

He walked through one of the crew parking areas, looking for participants to interview, when a blue Chevy truck with California plates pulled into a parking site. Great time to get an out-of-stater’s perspective on the Fiesta. It would make his family happy that he was willing to talk to strangers again, even though the acid in his stomach rose.

Alex hesitated when the tall, muscular man got out of the truck and walked to the back to pull out some camp chairs. The early morning light bounced off the guy’s sun-bleached brown hair as he set them up along with a small camp table. Alex took in the view of the well-fitting jeans hugging the perfect ass. Mr. California stood over six feet tall and looked like he worked out regularly. Alex could only hope that he wasn’t some homophobic jerk.

A chuckle escaped him when the man’s attention was drawn to his reflection in the tinted truck window. He ran a hand through his short curly hair, then reached into the truck for a ball cap to pull over his head. Then he grabbed a thermos and a travel mug.

Alex struggled to calm the rising panic racing through him as he prepared to approach. He’d dreamed of being a TV news anchor, but after his accident, he’d given up that dream to work for his family’s radio station. He was used to interviewing all sorts of people, famous or not, for the radio station. He loved meeting new people, but this gorgeous man before him was throwing him off his game. At least with the people who came into the radio station, he felt safe and didn’t need to worry about how they would react to his scars.

Alex waited until the man sat down and began to enjoy the show, before approaching from behind. Controlling the situation so that he wouldn’t have to expose his scars was the only way he could handle talking to the stranger. His insides burned and his breakfast threatened to come back up, but he needed this. He needed to get back into the game so he could continue his career as a broadcaster.

I can sum up Soaring Hearts for you in a single word: sweet.  Everything about this story comes back to that for me-the characters, the storyline, the overall feel-and even as much as it is sweet, there's still a tiny bit of spice to keep things fun.  It's a wonderful romance that will leave you feeling good and with a smile on your face.

The setting of the Albuquerque Balloon Fiesta gives us a lovely setting that will have you imagining the magnificent hot air balloons rising into the sky, setting the backdrop for Jeff and Alex's relationship to evolve.  Alex has been hurt-both physically and emotionally-and he tries to hide himself from others due to his physical scars.  But his job has him working with the public, so we get to watch as he comes out of his shell-and opens up to newcomer Jeff who is starting over after his own personal tragedy.  The two of them together just feels right, and I love how Jeff is with Alex-very aware of what Alex needs and his reluctance to let others see his scars.  Jeff is very protective of Alex, and in turn Alex feels safe with Jeff.

I really liked watching things develop between the two of them.  The story is relatively low-angst for the most part, but with a bit of drama thrown in at just the right point to pull the two of them closer together.  Soaring Hearts is the kind of story you want to read when you need a bit of a pick-me-up, and Jeff and Alex's story will warm your heart.

This was a 4-star read for me, and I'd recommend it to any M/M romance fan 18+ (while mostly sweet, there's a small amount of spice thrown in for good measure).

A cartographer by day, A.L. Boyd spends most of her free time with her horses, gardening, or reading. She never intended to be a writer, but stories like this one sometimes just pop into her head. The writing came about as a way to get the stories out. Her first story for the Goodreads M/M Romance DRitC event Crest Ridge Vacation was expanded to the novella titled Crest Ridge.
Website | Facebook | Goodreads | Amazon

Other works include:
Crest Ridge (Novella): Amazon
The Dawn of Darkness (Free Short Story): Amazon
And a short story included in the Anthology Kickass: Amazon
(written and donated to help fellow author Eric Arvin with his medical bills).

Giveaway: Win a $5 Amazon giftcard and an ebook copy of Soaring Hearts