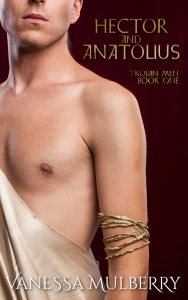 
Hector has been a dutiful son and prince his whole life until his father orders him to marry. The Trojan was meant for no woman, and when he meets a handsome youth named Anatolius, he is more determined than ever to rule one day with a man at his side. However, after he is betrayed by his brother Paris his fate seems unavoidable. Hector needs all the courage he has learned in battle, and the assistance of a goddess, to win the hand of the man he loves.

This is a gay (MM) romance novel set prior to the events of the Trojan War. It depicts romantic and sexual love between two men in a broadly tolerant society.

Hector and Anatolius is the debut novel of British author, Vanessa Mulberry.

After the meal, Hector drew the lad to him, and they relaxed on the shared kline to talk about their histories and their beliefs. Both drank strong wine, but Hector watched Anatolius carefully, mindful of its dizzying effects. “Just a little,” he said when Anatolius asked one of the servants for a third cup. “I won’t touch you if you’re sotted, and you will have to wait another day for my attentions.”

Anatolius appeared embarrassed, but when the servant stepped away, he whispered, “Thank you. I don’t want to wait.”

When the conversation lulled, Hector scooped his guest up and carried him from the room.

Anatolius put his arm around Hector’s neck and rested his head against the prince’s powerful shoulder. He laughed and said, “I will walk to your bedroom if that is where we are going. I’ll run if you like.”

Hector strengthened his grip, pulling him a little closer. “You may race me there another day, but tonight you go in my arms.”

“Don’t you think you can beat me?”

“It wouldn’t worry me if you did. I carry you because I want it to be known I will be your man tonight. Tomorrow I will follow you to the bed if you wish.”

Soon they reached his private apartment. It was a magnificent space: large and airy, with room on one side for cozier entertaining than the andron permitted and a soft bed for afterward. It led onto a terrace, which looked down over the city, and, as the night was warm, the imposing doors to it stood open, their silver casings glowing faintly in the moonlight.

The lamps were already lit, illuminating murals dedicated to Eros. Hector set Anatolius down and saw the lad’s eyes widen as he looked around at the walls. “Gods,” he murmured, “is this a shrine or a bedchamber?”

Hector had worshiped a lot of men in that room, but he didn’t think the pictures so unusual. He reminded himself that Anatolius hadn’t been in as many beds as him.

“Do you want to pray? I don’t usually conduct rituals in the palace, but we can if you like.”

Anatolius continued to stare at the walls. Hector saw his eyes rest on an image of two men making love. One was bent over, being penetrated by the other who kissed his back.

“Do you think we should? I want my first time to be pleasurable.”

“You needn’t ask Eros for such a blessing. I will ensure that.”

I've always loved the stories of Greek mythology, so the fact that Hector and Anatolius is rooted there was already a big plus for me, and a large factor in why I wanted to read this story.  The story is written with those ancient myths well in mind, and easily illustrates that period of history while creating a myth of its own.

I did think the encounter that first brought Anatolius to Hector's attention was a bit odd, and the explanation Anatolius offered was strange, but other than that the rest of the story settles in to become a tale that could easily be found alongside any other Greek myth that we already know.

The oddness of their first meeting aside, the relationship between Hector and Anatolius is careful yet has passion until the point when Hector's brother Paris breaks into the picture.  Now, ordinarily I'd be incensed at how things played out once Paris was involved, but with the magic of the gods being thrown about, it gives explanation to these things--even if it's one that is not quite satisfying.

The resolution to their issues is a long time coming, and it's good to see that even with the passage of time Anatolius and Hector's feelings never really disappear.  The solution to the issue of the two of them being men when Hector must marry to fulfill his duties is a bit convoluted, especially with Paris still around muddling things up, but in the end things work out and I was satisfied with the way things finally turned out.

This was a 3.5-star read for me, and a solid entry by Vanessa Mulberry for her debut.  I look forward to seeing what else she comes up with in the future.  I'd recommend Hector and Anatolius to M/M historical romance fans who like a bit of mythology in their reading, and would limit this to those 18+ for M/M sexual content.


Vanessa Mulberry lives in England with her husband and daughter. Her achievements are numerous and of no interest to anyone reading this. Her hobbies include cheap alcohol and romance novels. Growing up, Vanessa dreamed of becoming Mr. T, but the position has not yet fallen vacant. She has settled for being a romance novelist instead.

9th May - Bonkers About Books

10th May - Fangirl Moments & My Two Cents, Oh My Shelves

12th May - Foxylutely Books, All in One Place

13th May - Hearts on Fire Reviews

16th May - AM Leibowitz, Because Two Men are Better Than One

19th May - Making It Happen

24th May - The Novel Approach

25th May - Drops of Ink, The Purple Rose Tea House

27th May - The Land of Make Believe, GGR Review