A chance—and embarrassing—encounter brings Hunter and Chase together, but it’s patience and kindness that keep them there. Through a slow-blossoming friendship and a series of misunderstandings, Hunter finds himself fighting an attraction he thinks isn’t returned. But with the help of his roommate, Tony, he may just be able to make the leap and confess his feelings.

But love isn’t Hunter’s only concern. With his sister’s upcoming nuptials, he also must learn to face a family that hasn’t quite disowned him for his sexuality. With Chase by his side, it’s going to take strength for Hunter to stand up for himself and to hold on to what really matters. 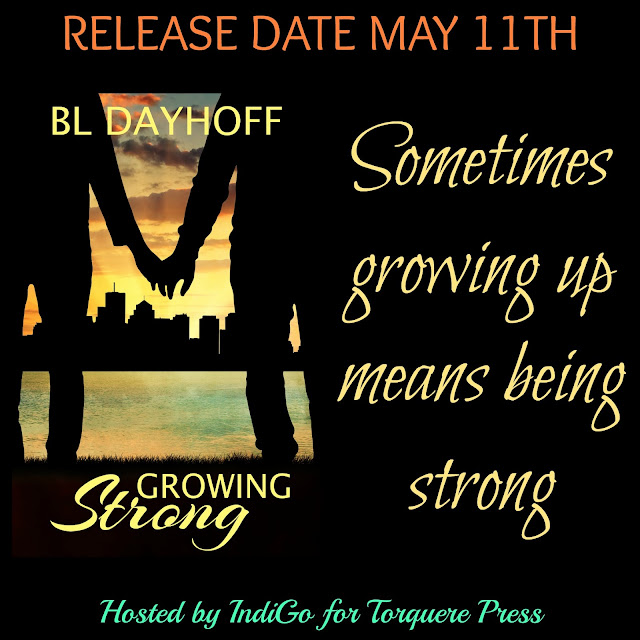 Hunter tripped over Tony’s briefcase in his rush to get to the door, cursed, and somehow remained upright. He stumbled a few more steps, caught himself on the kitchen counter, and stopped. Huffing once, he continued, with slightly more competence, the final few feet to the front door. When he opened it, Chase was there with a stack of DVDs in hand. “Hey.”

“Chase this is—Tony! Put some pants on!”

Tony grinned from his boxer-clad position on the couch. “You didn’t tell me you were having a guest.”

“Careful, I might take that as an order.” Tony winked, then wagged his butt all the way back to his room.

“Sorry about him. I think his mother dropped him a few times as a child.”

Chase chuckled. “Don’t worry about it. We all have a few in our lives.”

“Tell me about it. So what movies did you bring?” He sat on the couch, tucking himself against one armrest, and was pointedly not disappointed when Chase sat on the opposite side—making himself as far away as possible.

“Well,” Hunter chuckled. “I think I’ve heard of one or two of them. How about Lola? Unless there’s one you wanted to watch?”

“No, I just brought a variety so if you get bored, we can switch.” He opened the case, popped the DVD out, and handed it to Hunter, who got up and slid it in the DVD player.

He tracked down the remote, and when he turned around he found Tony sitting in his spot.

Glaring at Tony was equivalent to yelling at the rain, so he dimmed the lights, took the spot between them, and hit play. Lacking an armrest, he folded his arms across his chest and glanced at Tony. What did he think he was doing? Why was he crashing in when Tony had been egging him all week about how Hunter had a second date? Was he trying to make sure nothing happened? Or was he forcing Hunter to sit closer?

He shifted his gaze to Chase, who was watching the previews. With a sigh, Hunter sagged into the couch and skipped the disc ahead so he could stare at the opening credits.

But he couldn’t focus. He wished life was full of do-overs like movies. He had the running down. Or maybe just the running without ever getting anywhere. He woke up in the same bed every morning. Went to the same job. Knew the same people.

Leaning forward, he picked up the remote and paused it.

Tony elbowed him in the side and said, “Dude?”

“I just realized we don’t have popcorn. Do you want popcorn? I want popcorn.” He stood and shuffled into the kitchen.

“Sure, I could eat some popcorn.” Chase followed behind. “Plain?”

“Um.” He pulled the box off the shelf. “Movie theater. So extra buttery, I guess. That good?”

Hunter opened a bag, shoved it in the microwave, entered the time, and started it.

“I was worried that you hated the movie already.”

“No! I mean, it’s fine; it just started. I don’t like to judge things immediately.”

“Good. I know it’s a weird one, but sometimes I swear we only get the weird ones.”

Chase chuckled and leaned back on the counter as the smell of hot butter filled the air, joined by the pop-pop-popping of their snack. “It’s true. America sometimes feels like the redheaded stepchild of the world.”

“Hey, my grandparents were Canadian!”

Chase laughed. “I’m kidding. Sorry, I couldn’t resist.” He tilted his head to the side and flashed a grin. Cute.

Hunter diverted himself by pulling a bowl down and removing the hot popcorn. The comforting aroma rushed out when he opened the bag and poured the popcorn into the bowl.

Chase snuck around him to steal a piece, popping it into his mouth with a satisfied crunch. “First piece is always the best.”

“Right…” He was distracted by the smudge of oil on Chase’s lip and the pink tongue that darted out to clean it up. Averting his eyes to the bowl in his hands, he headed back toward the living room. “So, shall we?”

“Yep!” Chase followed him, plopping down in his previous spot on the now-empty couch.

Hunter hesitated, then sat beside him with just enough room to nestle the bowl between them. He hit play.

Chase glanced down the hall toward the bedrooms. “Should we wait for Tony?”

“No, I don’t think he likes foreign flicks. It’s fine.”

They settled into the movie, taking turns gobbling up popcorn as the scene unfolded again and again. Hunter couldn’t concentrate. Their hands kept bumping, knuckles grazing and skin brushing, each awkwardly pulling away. Was Chase doing it on purpose? Was it subtle flirting? Hunter couldn’t tell. He knew he wasn’t doing it on purpose—not that he minded—but what if Chase was?

Eventually he just grabbed a large handful and ate from that, leaving Chase what was left. It didn’t matter. Things could just progress naturally. If Chase was interested, he’d say something. He’d have to have seen how incompetent Hunter was. God, he was incompetent. Not that he necessarily wanted to date Chase. Friends first, that was a good idea. So that way they’d have something to base a relationship on. Not that he thought Chase was interested in a relationship. If he was gay—and Hunter was pretty sure he was—it didn’t mean he’d automatically be interested in Hunter.

Hunter was a dork, socially screwy, and God, they’d met when he’d been f*cked in an alley, drugged, and was throwing up. Yeah, there was no way in hell Chase was interested in him. He wiped his hand on the leg of his jeans and stared pointedly at the screen. Friends was good. He needed more friends. Tony would argue he needed friends period, but that wasn’t true.

He winced at a loud noise in the movie and sank down into the couch, shifting away inch by inch until he was leaning against the opposite armrest. To distract himself from the man on the other end of the couch, he tried to focus on the movie. When that didn’t work, he pondered if his character Erik would like this kind of movie. He didn’t seem like the type. Too busy with work and school to waste time watching movies when he could be studying or hanging with friends. Half closing his eyes, Hunter composed in his head.

If I had to describe Hunter and Chase (after the scene in which they first met), I would have to say adorable and sweet.  The two of them both represent that individually and as a couple, and watching them before and after was actually quite endearing.  This was the type of story that fills up several hours where all you have to do is enjoy the characters without a ton of drama and angst.  Yes, there's a small bit of conflict when it comes to Hunter's family, but for the most part the story centers on Hunter and Chase becoming and being a couple.

I'm a big fan of the adorable-and-sweet thing, so both Hunter and Chase's characters appealed to me right from the start.  I thought Hunter's friend and roommate, Tony, was pretty funny with how he just told it like it is and basically pushed Hunter along.  But as far as Hunter's sister and mother went?  Yeah, I'll just say that they really ticked me off and I very badly wanted to give them a very big piece of my mind.

I liked seeing Hunter's character go through the growth that he did, overcoming his placating attitude toward his family (we pretty much didn't see his father, so this is really referring to his mother and sister), and eventually standing up for himself and who he is, as well as for Chase.  The scene at his sister's wedding reception really put a big smile on my face.

While there are some naughty scenes sprinkled throughout the story, they are tastefully written and not overdone.  They do spice things up a bit, but without getting too down and dirty.

Overall, Growing Strong was a 3.5-star read for me, and was a great way to spend several hours reading.  I'd consider this a lighter read, though still recommended for M/M romance fans 18+ due to adult language and M/M sexual content.  I'm looking forward to reading more by this author in the future.

*I received an ARC copy of this book in exchange for an honest review as part of a book blitz.  Book reviewed strictly based on the story/content only.*

BL Dayhoff is working on coming out of her shell. She's always had an interest in writing, but only recently has done it for more than just her own personal amusement. She loves to fill her time with too many things, and her initials really are "BL" but unfortunately do not stand for Boys Love. Although maybe her parents knew something about the future...

Rafflecopter Prize: One winner will be selected to win an eBook copy of “Sometimes the Cowboy Falls” from BL's backlist.