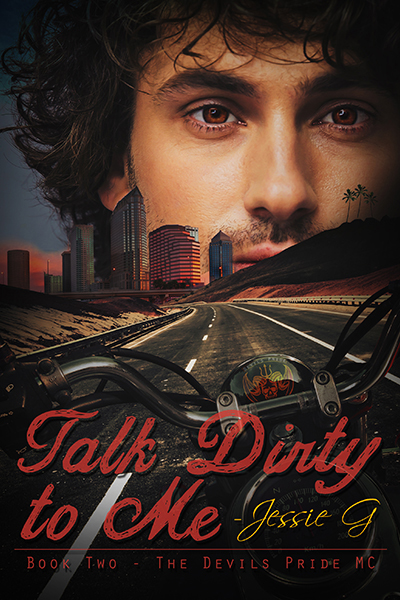 Talk Dirty to Me
Series: Devils Pride MC
Book: Two
Series must be read in order

Blurb:
As a secret agent for the DEA, Snake’s gone deep into Devils Pride MC with the hope of bringing down the head of Miami’s lucrative drug trade and finds himself saddled with the club’s volatile and secretive SA instead. Unfortunately, after years as partners doing shit neither of them wanted to do for reasons neither of them felt comfortable sharing, Snake considers Trick his best friend. Now he’ll do anything to repair the damage his own necessary lies did to their friendship because, while Trick may have walked away from the MC, Snake needs someone he trusts to have his back.
Meanwhile, Snake’s contact at the DEA has him tied up in knots. The sexy voice and inappropriate comments have him walking around with a permanent set of blue balls. Life undercover is lonely and he lives for every phone call, but his own personal Deep Throat is skittish about committing to a date once Snake returns to headquarters. As far as Snake’s concerned, they only have one shot to build something together and he’s not willing to waste it.
Greg knows he’s not Snake’s type, or anyone’s for that matter. Former love interests called him plain, chubby, and boring. More comfortable in his tech cave than with people, he’s a grade A nerd who isn’t exactly GQ material. Normally he would never be brave enough to flirt with anyone—much less the very hot and very dangerous ginger who’d been starring in his nightly fantasies—but Snake needed something to keep him from getting lost undercover. What started out as a helping hand quickly became an integral part of their relationship—if one could call a five year phone conversation a relationship—and Greg is terrified that once Snake’s sees the wizard behind the curtain, he’ll lose the only man he’s ever loved.
Now the DEA has called Snake home to plan the next stage of the mission, leaving Greg no more places to hide. When fantasy and reality collide, will it be everything Snake hopes for or everything Greg fears? The trick will be staying alive long enough to figure out the answer.

Categories: Bisexual, Contemporary, Erotica, M/M Romance, Mystery, Romance (Please note: Snake’s bisexuality is only mentioned. It is not gone into.) 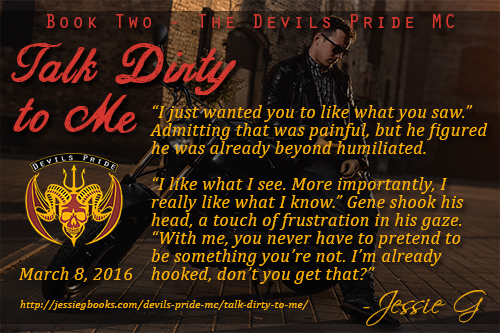 Excerpt (Very Naughty!)
“That sexy voice and those incredible brains are a potent combination.” There was a sigh and a muffled groan, reminding Greg why they were talking at close to three in the morning. “Lucky for you, my ego’s big enough to handle the challenge.”
“Your ego or your d*ck?” Just saying it made his mouth water and he’d give anything to see it, touch it, taste it...
“Damn, Sunshine, you gonna groan like that when I’m shoving my big ego down your throat?” The rough dirty talk was more like the Gene he knew and loved.
Yeah, as hopeless as it was, there was no other word for the feelings that ran deep and true inside him. And it was hopeless. While not conventionally handsome, Gene was everything he could ever want in a man—tall, strong, rugged, smart, and deadly—and damn him for being a ginger to boot. The type of man who had no trouble finding a willing body to f*ck. The type of man who would never look twice at an out of shape, curly-haired, glasses-wearing geek. But that was his secret and as long as Gene didn’t know exactly what he looked like, he was able to hold on to the fantasy for a little while longer.
“You know I will.” He was groaning again just thinking about getting his lips anywhere near Gene’s body. “I can feel you fisting my hair, holding me still while you make me take every inch.”
“F*ck yeah, I’d grab two fistfuls and f*ck that dirty mouth the way it deserves,” Gene promised. “You want that, don’t you, Sunshine? To be manhandled until your throat is raw and your lips are swollen.”
Greg fisted his own aching c*ck, dragging his palm from balls to tip. What he wouldn’t give for that just once. “More than anything.”
“My dirty little Valentine.” Gene’s voice was ragged and full of satisfaction. “Get your toy, dirty boy, I’m dying to pound that tight ass until you’re screaming my name.”
There was no embarrassment as he reached for the long, thick vibrating dildo he’d already prepared in anticipation of this phone call. He wanted Gene too much to allow embarrassment to stop him from experiencing whatever he could with the man. “Tell me...tell me how you want me. On my back? On my knees?”
“On your back so I can see your face,” Gene purred and Greg felt his heart skip another beat. His dirtiest fantasies had nothing on phone sex with Gene. The real thing would probably kill him. 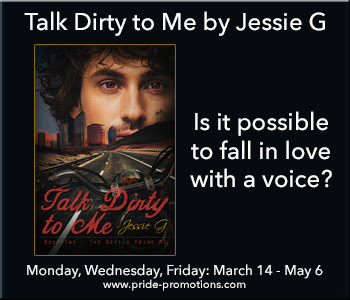 After reading Tricking Chase and absolutely loving it, I was  really excited to get started on Talk Dirty to Me.  And whoo boy, it sure did not disappoint!  I had blinders on to everything else around me as I totally fell into this story, and did not want to put the book down-staying up way too far past my bedtime to finish in one sitting.  Be sure to read this series in order-if you don't, you'll probably be lost as events build on things that happened in the previous book.

I loved the characters.  Many I was already acquainted with from Tricking Chase, and just as in that story, here they continued to be complex characters with a LOT of depth.  They all work so well together, playing off each other and really coming across as a big, unconventional family.  I actually identified with Greg and his insecurities about how he looks, and could empathize with him.  He was sweet, yet quick to stand up for himself-he's not one you'd expect to be submissive at all once he opens up his mouth.  We didn't see much of him in the first book, and here in Talk Dirty to Me he really shines.  For Snake (aka Gene), we did get to see him often in Tricking Chase where his character comes across as a bit rough.  Here we get to see his rough side but also his softer side with Greg, and also his protective nature.  The two of them create sparks together, and not just in the bedroom.

There's a ton of suspense with the ongoing Durango/Santos storyline.  The writing is just as excellent as it was in book one, flowing so easily that it pulled me in immediately and just did not let go.  A lot of that has to do with the characters and how well they interact with each other...I cannot express enough how much I love the characters of this series.  I'm not normally a big MC romance fan, but with the characters, plot and writing in this series, I am really enjoying the genre for the first time.

Talk Dirty to Me was another 5-star read, and this series has become a top recommendation for me.  I can't wait for more, and since I hadn't read anything else by this author before starting the series, I'm now going back to read everything else on Jessie G's backlist (I've just got to hear the stories for all the characters appearing in The Devils Pride series from the rest of her books!).  Fans of M/M romance will definitely want Talk Dirty to Me in their library, and honestly I don't think it will matter if you're an MC romance fan or not.  What really shines here are the characters and their complex relationships with each other-which are extremely well written and quite intriguing.  This is strictly for those 18+ due to adult language and explicit M/M sexual content-which is absolutely searing-you're going to love the dirty talk!

"Never doubt that you're mine."  An animal, wild and feral, gazed down at him possessively.  "My dirty little genius, my sunshine, my lover." 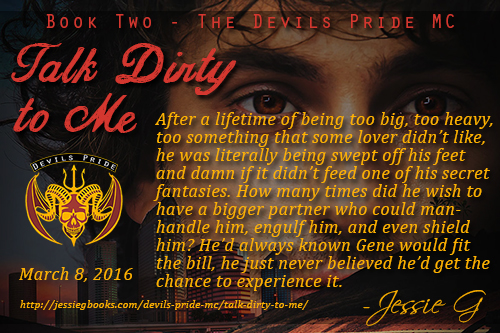 Meet the author:
Like many readers, the dream of being a writer has been with me a long time. After three decades of trying, I'd begun to doubt. Thanks to social media, I followed my favorite authors hoping to glean some words of wisdom as I pounded out half-formed ideas with alarming regularity. Two repetitive themes emerged: to be a great writer you must read a lot and your butt must be in the chair every day like it's a job. The more you write, the easier it will be to write and the better you will be at writing. I took that advice to heart and write every day. With three series in the works and a full schedule of releases planned for the next two years, it's been amazing to have made this dream my reality.
I am a firm believer in marriage equality, love at first sight, power dynamics, and happily ever after. I'm a lover of strong secondary characters, and series filled with families—biological or chosen. All are themes you'll find throughout my books.