Release Blast-Excerpt & Giveaway: KISS ME THAT WAY by Laura Trentham

Kiss Me That Way
Cottonbloom #1
By: Laura Trentham
Releasing May 31, 2016
St. Martin’s Paperbacks 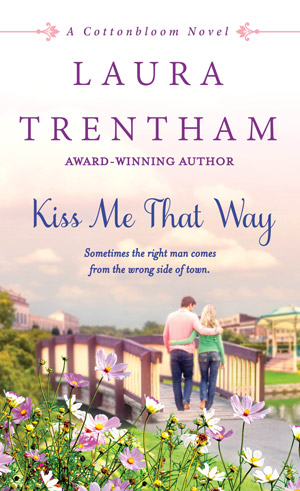 A river divides Cottonbloom in two: the upscale enclave on the Mississippi side and the rundown, rough and tumble side in Louisiana. They’re worlds apart—but nothing can build a bridge like love…

Cade Fournette never had it easy Cottonbloom. He stuck around long enough to raise his orphaned siblings and then hightailed it out West—and never looked back. Even though he’s made a success of himself in Seattle, Cade never lost the toughness and the angry edge that helped him survive down South. His only weak spot: the girl he left behind…

Monroe Kirby came from the wealthy side of town, but that didn’t protect her from her mother’s drinking—or her mother’s boyfriend. It was Cade who did that, on a long-ago hot September night, before he disappeared…along with a piece of her heart. Now Monroe is a physical therapist who can fight for herself, and it’s Cade who could use some conditioning when he makes an unexpected return back home. Will he and Monroe pick up where they left off and finally explore their mutual passion—or will the scars and secrets of the past divide them once more?

“You left Cottonbloom without telling me. Without saying good-bye. I want to know why.” Monroe hadn’t meant for the words to come out at all, much less with such vehemence.


“It was complicated.” Cade broke eye contact. “You were a good kid in a bad situation.”
“Weren’t you a good kid in a bad situation?”
He shifted toward her, bracing a hand on the dash and laying his other arm over the back of her seat, invading her space. She didn’t retreat. His intensity spurred her heart rate into an erratic gallop, yet she wasn’t intimidated. Perhaps it was only echoes of the past, but he made her feel safe, even when he was the one she should be scared of.
“I grew up fast and tough.” His voice contained more than a hint of warning.
“You were nice to me,” she said softly.
“Don’t fool yourself into thinking I’m nice. I wasn’t then, and I’m sure as hell not now.”
He ran a callused finger down her cheek, the rasp igniting her nerve endings like a flint. His hand continued south and wrapped itself in her braid, the slight tug on her scalp sending shivers through her body in spite of the sun bearing down on the truck. Her nipples felt tight, and she hoped her tight sports tank masked her sudden, inexplicable arousal.
He pulled her braid, forcing her toward him. She didn’t fight him. He dropped his face next to hers, his coarse beard hair caressing her cheek, his mouth close to her ear. “If I see something I want, I go after it and get it by any means necessary.”
“How very Machiavellian.” She tried a laugh, but it came out more like a stuttering sigh. His scent hooked her even closer, and her lips grazed the outer rim of his ear.
He pulled back, his green-eyed gaze roving her face. She returned the favor, noting the faint brackets around his mouth, the crinkles at his eyes, the thick beard. A full-grown man. Yet was he so different from the boy she remembered?
“Ovid.” The movement of his lips jammed the cogs of her brain. The word made no sense. Her confusion must have been obvious, because the mouth she stared at tipped up in the corners, deepening the grooves. “The Greek philosopher Ovid, not Machiavelli, actually wrote: The end justifies the means.”
“Ovid. Of course.” Apparently, Monroe had slept through that philosophy class at Ole Miss. The fact that high-school dropout Cade Fournette was quoting Ovid made her wonder what other mysteries she might uncover if she went digging.
Just when she was ready to grab a shovel, he released her braid and slipped away. His limp was less pronounced as he took the stairs holding the cane parallel to the ground. Although he’d physically released her, she felt bound to him in some other fundamental way, incapable of tearing her eyes off him until he disappeared behind Sawyer’s front door. Even then, she sat, unable to drive away for a long minute.
How could the simple brush of Cade’s finger ignite a fire when other men left her cold? As her arousal ebbed, she realized something else. She’d just been manipulated by a master. He hadn’t explained why he left.
She spent the evening going through the motions of her life, eating when her stomach growled and heading to bed when her eyes felt heavy. A few short hours ago, her life had been tidy and predictable and boring. Cade Fournette’s return had spun her into chaos.

An award-winning author, Laura Trentham was born and raised in a small town in Tennessee. Although, she loved English and reading in high school, she was convinced an English degree equated to starvation. She chose the next most logical major—Chemical Engineering—and worked in a hard hat and steel toed boots for several years.
She writes sexy, small town contemporaries and smoking hot Regency historicals. The first two books of her Falcon Football series were named Top Picks by RT Book Reviews magazine. When not lost in a cozy Southern town or Regency England, she's shuttling kids to soccer, helping with homework, and avoiding the Mt. Everest-sized pile of laundry that is almost as large as the to-be-read pile of books on her nightstand.