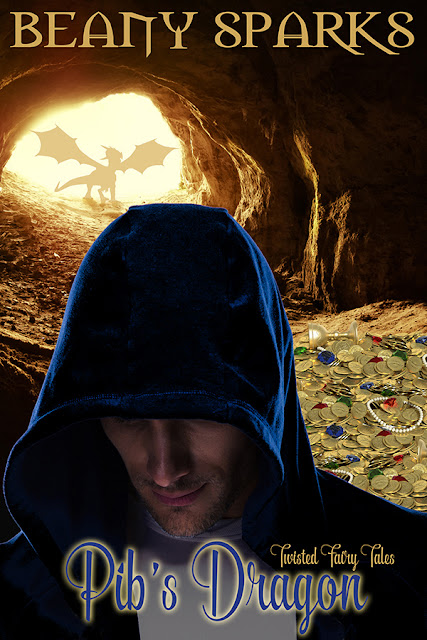 
Author: Beany Sparks
Part of a series? If yes, can it be read as a standalone? Yes and yes
Series Title: Twisted Fairy Tales
Number in Series: #1
Publisher: Rainbow Ninja Press

Blurb:
A dragon is about to find out what happens when a cat discovers his cave of shiny treasures.

After nine years, Pib is finally free from his contract with the newly wed prince. Slipping out in the middle of the night to avoid getting stuck in another contract, Pib shifts into his cat and makes his way home to the little village he foolishly left, hoping his best friend Wil still lives there.
Dray is bored. His services as a princess-guarding dragon are no longer needed and even his gold and jewels are unable to cheer him up. His mood changes quickly when he catches someone in his treasure cave, and it starts a series of events that change his life forever.
When the two finally meet, sparks fly, but Dray will have to move quickly if he’s to save his cat after Pib gets kidnapped.

Excerpt
Prologue
Pib snuck into the darkened room, tiptoeing quietly so as not to wake the newly crowned prince Geraint and his princess. Looking around, he both thanked and cursed his shifter senses. While he was grateful he could see inside the room, the smell of sex throughout the air was something he could have done without.
Reaching the desk on the far side of the room, he paused and glanced at the couple. Once he was satisfied they were still asleep, he eased open the cover and found what he was after—his freedom. After nine long years as the bastard’s slave, the letter freeing him from servitude almost brought tears to his eyes. Carefully folding it and placing it in his inside pocket, Pib gently shut the desk and tiptoed back toward the bedroom door, leaving the room as silently as he’d entered.
He knew there was only a limited window of opportunity for him to make his escape. Even though the pompous bastard had made a production of signing the form and granting him his freedom, Pib knew it was all for show. If he didn’t escape now, Geraint would get him alone and force him to sign another contract and then make some sort of bogus announcement about how Pib wanted to stay.
Pib snorted, unable to help himself. Luckily there was no one else around the castle at this time of the night, though even if there was, Pib didn’t care. He was leaving, and no one was going to stop him. Anyone who tried would have a close encounter with his knife, or his claws, he wasn’t picky.
“Hey, Pib, where are you off to in the middle of the night?” asked the guard at the front door of the castle. Pib never bothered learning their names or getting friendly with them, especially since Geraint could force him to kill any of them at a moment’s notice. He’d learned that it didn’t pay for him to form any attachments with those surrounding Geraint.
“Getting an early start on my retirement,” Pib replied, smirking at the man while he continued to stroll toward the exit.
“Sorry, Pib, but I have to check. Do you have a signed letter from Prince Geraint?” The guard shifted from foot to foot, showing his unease.
Pib stopped in front of him and forced a smile. “Of course,” he said, carefully extracting the letter and handing it over to the guard.
He waited, watching the guard closely as he read the letter. One wrong move and Pib was going to gut him. Nothing could happen to that letter.
“Looks good,” the guard said, handing the letter back to Pib. “It’ll sure be different without you around, but all the best. And, uh, don’t take this the wrong way, but I hope I don’t see you again.”
Returning the letter to his pocket, Pib looked up and smiled a real smile at the man. He wanted to laugh when the guard’s face paled as he caught sight of Pib’s canines, but restrained himself. “Don’t worry, I hope never to see you again either.”
With that, Pib walked out of the castle and made his way through the sleeping village. Pulling his hood up, he used the dark material to blend into the surroundings. He wasn’t taking any chances that Geraint wouldn’t wake up any moment and send guards running after him. After all, Pib was practically friends with all of the skeletons in Geraint’s closet.
Pib reached the edge of the village and paused. After nine long years, he was finally free of Geraint, his orders, and most importantly, his shackle. The magical cuff that had decorated his right ankle for nine years had been removed after Geraint had signed his release. The cuff was the only thing ensuring Pib’s obedience, and finally, it was gone.
Taking a deep breath, Pib stepped over the invisible boundary line and felt the remaining enchantments shatter and disappear, leaving him standing as his true self for the first time in years. Reaching inside, he called out his inner cat to come out and play, and in seconds, his clothes disappeared and he was standing on all fours in his serval form. Stretching, he threw one last glance back at the castle and the village before slinking away into the trees, using the natural camouflage to shield him as he made his way toward the start of his new life.

Since English was never her strong subject at school she never expected to write a story, let alone try to get it published. With suggestions and support from friends, her muse—“affectionately" known as PITA—was finally able to break free, and in January 2014 her first story was written. Since she can’t put PITA back in his box—she's tried!—Beany has decided to give in and team up with him.

You can find Beany at the following places: