Learning to Love
By: Felice Stevens
Releasing May 2, 2016
Self-Published 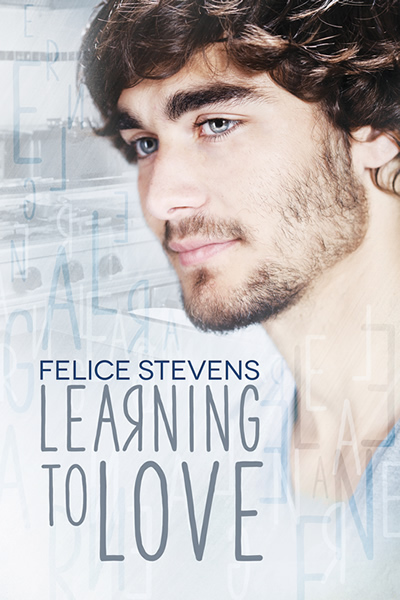 After ten years away from home, bad boy caterer Gideon Marks has a lot to prove. Getting the holiday catering job at his childhood synagogue is the first step in demonstrating to everyone he didn’t turn out to be the failure they predicted. What he doesn’t count on is Rabbi Jonah Fine, his high school nemesis and secret crush, stirring up old feelings Gideon thought long gone and secrets he’s buried deep for years.
An unexpectedly passionate encounter shocks Gideon, but he pushes Jonah away, convinced he isn’t good enough to be in a relationship and would never be accepted by Jonah’s father. But Jonah hangs tough—he won’t allow Gideon to hide or run away from life again. And when it comes to love, Gideon learns the most important lessons aren’t always taught in school.

“How did you know where to find me?”
“I didn’t. But when I went to your apartment and discovered you weren’t home, I thought to myself, ‘Where would a chef be early on Saturday morning?’”
Pleased he’d thought so carefully about me, I bit my lip to keep from smiling, then muttered with my head down, “Lucky guess on your part.”
“I’d like to think so,” said Jonah, his voice as soft as the breeze. My eyes met his, the hurt from our last conversation shimmering bright in their depths, causing a throb within me of a longing I’d never known existed. “Or maybe it was fate.”
He smiled then plucked the paper bag of rugelach out of my clutches, rummaged through it until he found an apricot one, and bit off half.
“Well, if you’re that hungry, I guess you can come home with me, and I’ll make you an omelet,” I grumbled but couldn’t stop the small grin tugging at my lips. “But I planned on browsing a bit more through the market first.”
“I’d like that.” Jonah walked beside me, and we meandered past the stands piled high with colorful peppers and squash. We strolled in silence, but every few steps I’d sneak a glance at him, expecting Jonah to speak. Instead he remained irritatingly, cheerfully silent.
I sampled some hot mulled cider and licked my lips. Spending so much time with Jonah gave me new insight. I’d always thought him superior and judgmental; perhaps I had been wrong in my assessment. He captivated me with the humor in his speech, warmth in his smile, and that unmistakable flare of desire in his eyes. Goddamn it, I wanted him.
I extended the paper cup. “Do you want a sip?” Its heady cinnamon scent remained one of my most favorite things about the fall season. To my shock, instead of answering me, he bent down and kissed me on my lips, lapping at their sticky sweetness. He stepped back, but I put a restraining hand on his wrist.
“What’s going on? Why are you really here?”
The honesty in Jonah’s face took my breath away.
“Do you really have to ask, after the last time?”
My body refused to listen to the war inside my head, kindling a deep need I couldn’t understand. I took a step forward, but unlike me, Jonah didn’t retreat. He stood firm, and I stood close enough to almost touch. Close enough to smell him.
“I’m not who you want; can’t you see that?”
“You don’t have any idea what I see when I look at you, Gideon.”
I wanted to yell back at him, No, you have no idea who I am, but I couldn’t bring myself to ruin the moment. I had no clue who Jonah thought I was, but I wanted to be that man if only to be able to have him always look at me like this. Like I was special. Like I was his. The sun beat hot upon my shoulders, and I held his gaze while contentment poured over me like a warm summer rain.

One thing I've found I can count on from Felice Stevens--when I pick up one of her books, I know I'm going to get a good, solid story with romance, heat, a bit of drama, and my #1 must have-a happy ending.  Every part of this is true for Learning to Love, even if the "L" word is said a bit too early in the story for my liking.

As for me, I'm going to give you the "L" word now--as in I loved both Gideon and Jonah.  Gideon is a character that every reader will be proud of for what he's achieved given the adversity he's faced in his life.  And Jonah is a man who is strong, compassionate and thoroughly enamored with Gideon-and has been for years.  They both perceived each other differently back in high school than what their realities truly were, making Gideon's slightly harsh reaction to Jonah understandable once we find out his reasoning...even if we don't agree with that reaction ten years later.

The two of them together are combustible and everything between them is quite intense.  The "L" word pops out very early on which felt a bit rushed to me, but Gideon and Jonah both show us again and again throughout the entire story that it is eventually warranted.  I really liked how the two of them supported each other, and by the time I was done reading I couldn't imagine them ever not ending up with each other.

There's a couple of spots with some drama to keep you on your toes.  I do think Gideon's reaction to something Jonah does for him is a bit extreme, though I can understand why Gideon would be upset.  The other bit of drama on Jonah's end dealing with the temple doesn't quite get all answered in this story, or at least not enough for me to feel like we got all the answers.

A quick aside here for a warning...be sure to keep some hearty snacks on hand while you read.  There's plenty of simply scrumptious food going on in the book since Gideon is a caterer with his own storefront-after reading I had to go dig out my own recipe box for my mom's kugel recipe, and I lucked out while reading that my hubby just happened to make brisket for us, otherwise I'd be pulling out that recipe too LOL.

Overall, this is another great story, leaving me happy and satisfied once I was finished reading (oh, and a bit hot and bothered because whoo boy...Gideon and Jonah can really amp up the steam factor!).  Learning to Love was a very solid 4-star read for me, and I definitely recommend it to M/M romance fans 18+ (for adult language and that oh-so-scorchingly hot M/M sexual content).  I really hope we get a story for Gideon's best friend Rico too-I found him to be sweet, supportive and an all-around wonderful character.

I have always been a romantic at heart. I believe that while life is tough, there is always a happy ending around the corner. My characters have to work for it, however. Like life in NYC, nothing comes easy and that includes love.

I live in New York City with my husband and two children. My day begins with a lot of caffeine and ends with a glass or two of red wine. I practice law but daydream of a time when I can sit by a beach somewhere and write beautiful stories of men falling in love. Although there is bound to be a little angst along the way, a Happily Ever After is always guaranteed.