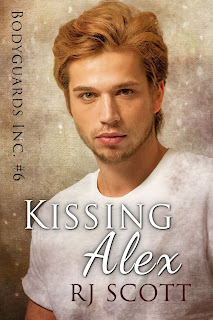 Martial arts expert Lewis is the kind of bodyguard who slips under most people’s radar. Quiet, reserved, but constantly on alert, he’ll do his job, keep his charges safe, then relax by reading Shakespeare in his spare time.

When he’s given a case involving a spoiled celebrity singer, Lewis isn’t all that impressed. The job is nothing but babysitting a pretty boy, and he’s used to diplomatic postings with depth and challenge. What could he possibly have in common with the man he’s being forced to look after?

Alex became the envy of many when he and his fellow bandmates won second place in a huge TV talent show. He has more money than he knows what to do with, no life goals, an ex-boyfriend selling a sex tape and now, someone who wants him dead, or at the very least maimed.
Can Lewis keep Alex safe, even when things usually in his control go to hell? Is running to a remote Scottish island the only way for them to stay alive?

"I just don't have words for how amazing this Bodyguards Inc series is.  And it just keeps getting better and better."  ~rainbowgirl (Amazon Review) 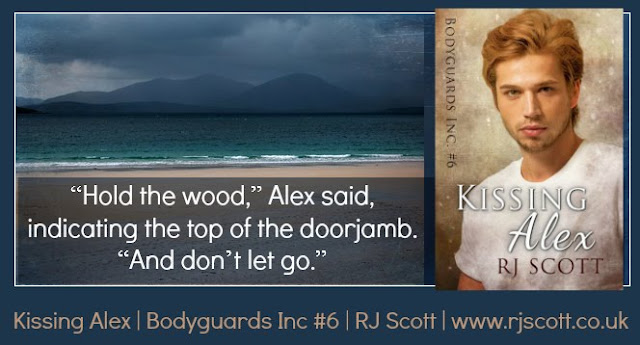 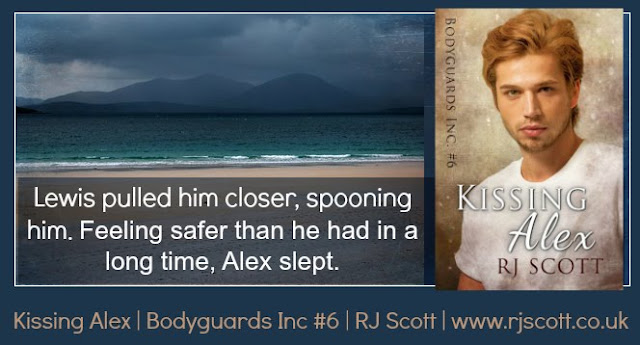 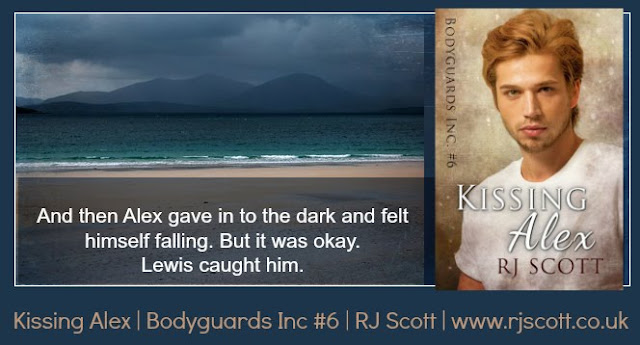 If I wasn't already a huge fan of the Bodyguards, Inc. series, Kissing Alex would have made me one right from page one.  You might think that a series featuring essentially the same theme in each book-bodyguard and client falling for each other-would get old after a while...but in this case you'd be very wrong.  RJ Scott continues to give readers a fresh look with each story in the series, and I have yet to be disappointed with any of the books.

Alex is so quiet and unassuming, yet buried inside is a man who can clearly take charge...at least behind the bedroom door.  Lewis embodies strength, balance and intelligence with just about every aspect of his life...but is ready and willing to let someone else be in control when things get hot and heavy. Both are quite the opposite of what they may seem when it comes to the steamy things...which makes them a perfect match.  And when they kiss...mmm...

There is of course a threat hanging over Alex (otherwise why would he need to be guarded, right?), and this provides some suspense and drama at just the right time.  Things develop quickly between him and Lewis, but it never feels forced.  The two of them together become a delicious makeout-fest, and the whole kissing thing just brings a great romantic angle to their relationship...you'll see when you read it.  While yes, they do get down and dirty, the kissing...oh, the kissing.

I loved the story overall-the setting, the buildup between Alex and Lewis, the kissing (oh, did I mention that already?), Lewis in a kilt, the atmosphere of the island (can I move there too?), the excitement and drama as things come to a peak-it all works so wonderfully together.  I did not want to put this down, and read it in a single sitting.

This may be my favorite from the series, it's really hard to choose.  Kissing Alex gets 5 stars from me, and I highly recommend it not only to fans of the series but to anyone who is a fan of M/M romance.  It is for the 18+ crowd due to adult language (no cursing Alex!) and M/M sexual content.  I think if this series just keeps going on and on, I'll continue to be a really happy camper...can't wait for the next one!