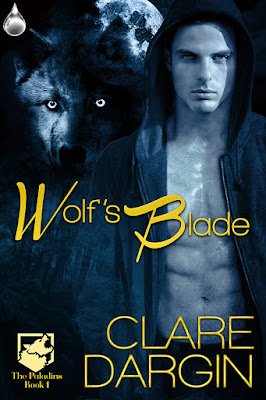 Samantha Dixon rescues a wounded wolf shifter in the woods near her home … and unwittingly gets drawn into a dangerous game of cat and mouse with a murderer. Callum Blake is on the trail of an evil man who would be king of all wolf kind, no matter the cost … it’s up to Callum to stop him. Can Callum fulfill his duty to protect his pack and save the woman who is destined to be his mate? Filled with passion, action, and suspense, Wolf’s Blade is Book 1 of Clare Dargin’s new paranormal romance series, The Paladins.

Why are you silent? You’re the reason I took this mission and now you’re allowing me to suffer?

His frustration mingled with his physical pain, adding to his misery. The beast fought its way to the surface. He opened his mouth and howled. A mixture of a roar and a yell, it relieved some of the tension within him, but it did not drive away the urge to shift.

Leaning against the tree, he dug his claws into the bark, burrowing deep grooves as he exerted his strength against the muscle contraction. His pulse pounded in his ears as sweat poured down on his face. Unlike his wolf self who resided peacefully inside of him, his lycan did not have the same kind of placating nature. It yielded only to the strongest of commands exerted to it from his mind. It was supposed to live in harmony just as his inner wolf, but it refused.

Author Clare Dargin has given us a unique take on the concept of wolf shifters vs lycans in her book “Wolf’s Blade.” Rather than them being one and the same, they are actually two different species. Although both are dangerous in their own right, the rare individuals who are a combination are especially a danger.

So when the hero, Callum Blake, who is one of those rarities, finds a potential mate, he is torn by conflicting desires. He must protect her not only from a treacherous ex-packmate, he must protect her from himself.

I really enjoyed this story, the first in a new series, and look forward to upcoming releases. 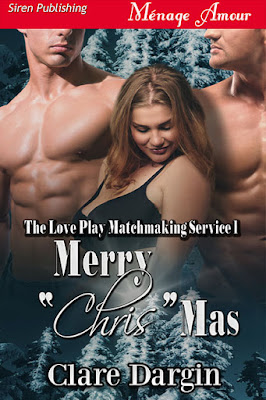 Jilly Reimers wants love but can't find it. Chris Spinell is a veteran of the war in Afghanistan who suffers from PTSD and a haunting feeling that something is missing in his life. Chris Poole is also an Afghanistan war veteran is ready to break out of his shell but is unsure how. With Christmas just around the corner, they decide not to spend it alone. Believing The Love Play Matchmaking Service to be just what they need for a night of fun and passion, they sign up. But when the guys show up and see that they've been set up on a menage, the only one happy about it is Jilly. Their consultant, called an Eros, assures Jilly that the service has a perfect track record but she's certain they'll be the first ones to get their money back. Will they have a very merry Christmas? Or will the three spend yet another one alone?

Jilly idly twirled a lock of her hair as she gazed at the fire. The meal was good, a bit awkward, but all right. Now with Chris S. in the shower, she and Chris P., who’d freshened up after her, sat beside her. She hoped she’d get a chance to know him a little better, now that they were alone.

Unlike Chris S., Chris P. was quiet, more reserved. His warm smile could melt ice. They’d spoken a bit about his life in Australia and how he met the other Chris when they were on Diego Garcia, a tiny atoll in the Pacific. It was there he garnered a better perspective on life, friendships and love. She reasoned that war tended to do that to a person.

She looked at him again, admiring what she saw. He was gorgeous. If only she were a femme fatale like her friends. She pictured grabbing him by the scruff of his collar and planting a long seductive kiss on his pouty lips.

Golden and sun-kissed like a surfer, he had a look impossible to have around this time of year in Michigan, unless he spent countless hours in a tanning booth. But at the same time he didn’t look like the type who’d go to one. He seemed too rugged. She glanced at his short, flaxen hair, which he wore pulled back in a stubby tail. It accentuated his keen facial features. His physique, like that of a gladiator, made her want to whimper. Built like a brick wall without being too thick, he was three words—supple, etched, steel. And his Australian accent added to his raw sexiness....


Wow, this was a quick good read. Now if you are into erotic menage settings...then this is a read for you. Now, this is a adult read so be aware of that. This author really works it with these 'three lonely individuals' especially during the holiday season who were seeking happiness. What will happen when Jilly Reimers who is looking for love meets Chris Spinell and Chris Poole who just happened to know each other being that they were both war veterans of the war in Afghanistan? Will "The Love Play Matchmaking Service that has been set up my a sister and friend be able to help these two men find the love they longed for? What will happen when the three find out they have been set up in a menage by this service? Be aware that there is plenty of hot steamy sex scenes. In the end will Jilly, Chris S and Chris P get the Merry Christmas they wanted? To get the answers to these questions and so much more you will have to pick up 'Merry "Chris" Mas' to see how well this author presents this very intriguing 'menage' story to whether these three get their wish. There seems like there will be more in this 'Love Play Matchmaking Service series.'