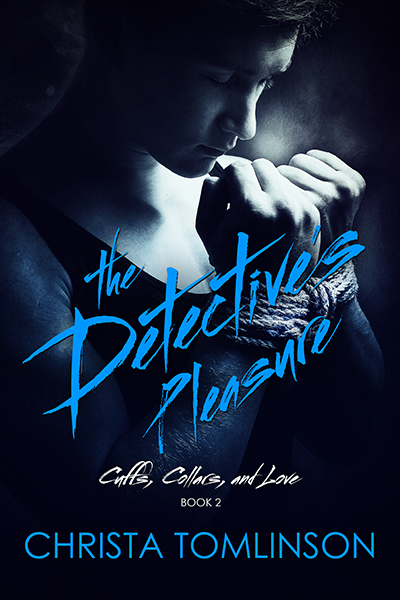 Release Date: February 11, 2016
Blurb:
“You’ll kneel for me without me having to tell you to. And when you do, you’ll feel so much better. Trust me.”
- Detective Sam Roberts

Officer Ryan Bennett: Ambitious and smart, Ryan Bennett is a young officer on Houston’s police force. He’s pursuing his dream of being promoted to the city’s elite SWAT team with a single mindedness that won’t accept any outcome but success. But that isn’t his only dream. Ryan wants more than a coveted position on SWAT. He wants to be owned by a strong Dominant. To give himself up to a Dom who will make him shudder with pleasure beneath a firm yet loving hand. Unfortunately, Ryan has had nothing but failure in that part of his life. Now, he’s hidden that dream away from everyone, including himself. And he refuses to let anyone close enough to see what he truly desires, and who he truly is.

Detective Sam Roberts: Cool and calm, Detective Sam Roberts is good at reading people, during the day as a detective and at night as a Dom. He easily sees past the hard layer of arrogance surrounding Officer Ryan Bennett to the hurt submissive hiding beneath. He wants to help Ryan, even though the stubborn young man resists him. But Sam isn’t one to back down from a challenge. He’s determined to help Ryan embrace the soft, giving nature of his submissive side. Using both a gentle hand and the sting of the whip, he’ll work to coax Ryan’s submission free. But what will Sam do if he’s successful? Let Ryan go as promised? Or give the young officer the very thing he’s wanted for so long?

Excerpt:
Ryan stopped picking at the wax and met Sam's eyes in the mirror. He didn't say anything. He just stood there, looking at Sam's reflection.
“Do you need-.” Sam stopped. Ryan was on the brink of ... something. Sam knew what he said would either finally get him to open up or cause that hard shell to close even tighter around him. Remembering Ryan’s seeming aversion to needing someone, he asked instead, “Would you like some help?”
Ryan moved his head, the movement so slight it could barely be called a nod. If they hadn't been staring at each other in the mirror, he would have missed it. Sam touched his fingertips to Ryan's shoulder, waiting to see if he would be rejected. Ryan didn’t react, so Sam moved in closer. When he laid the warmth of his palm across his back, Ryan closed his eyes and shuddered. He gripped the countertop with both hands, his head hanging low.
“I don't know how to let go,” he said in a voice hoarse with restrained despair.
Sam stepped forward again, moving close enough behind Ryan that he could wrap an arm around him. Ryan stood there for a second before he turned and leaned into his embrace. Sam looked at their reflection in the mirror. Ryan's blond head was nestled against him, streaks of wax down his back. For the first time he looked truly vulnerable, just as Sam had wanted to see him all along. He stroked Ryan's hair, pressing a kiss to the soft strands.
“I'll show you, Ryan. All you have to do is trust me. I'll take care of the rest.”

I haven't read anything by Christa Tomlinson before, but I can guarantee you that I'll be reading plenty from now on.  This is also the most risqué M/M erotica/BDSM story I've read so far, and while I'm still new to this level of naughty storytelling, I thought it was quite well done and it certainly left me intrigued for more.

Ryan is one heck of a fiery sub, the "brat" label fits him perfectly.  But there's history behind his attitude, most of which we don't find out about until the second half of the story.  I found Sam to be deliciously dominating and a great match to help rein in Ryan's willful ways.  I do confess, for most of the first half of the story I was a bit put off from the matchup of the two of them, but once the scene where Sam has Ryan tell him about his previous Dom's comes up, the intensity of everything ratchets up to an extreme level and from that point on the book becomes simply unputdownable.

Watching as Sam helps Ryan is actually quite mesmerizing.  Add in the tension and suspense from the SWAT team issues with Ryan joining the team as well as the pranks being called in that they can't seem to solve, and I was pulling a marathon reading session since I couldn't pull my eyes away from the pages.  I loved that we got both Sam and Ryan's points of view, it made the story more enjoyable and gave it so much more depth.

Since this is my first book by this author, I wasn't familiar with the other characters featured that were in the first book, but what I read here in this story has me going back to read it.  I simply HAVE to know what the story behind Logan and Clay is.  All of the supporting characters are written very well and have excellent depth, which now has me hoping for many more stories in this series.

For a story that took me much further outside my comfort zone than I've yet been in this genre, The Detective's Pleasure was a thought-provoking, titillating read and shines an intense light on Ryan and Sam as they develop their dynamic relationship...ultimately delivering a deeply satisfying conclusion.  Though I do admit I was rolling my eyes the teensiest bit at the result of the SWAT pranking case.

Although Christa graduated from The University of Missouri-St. Louis with a degree in History, she prefers to write contemporary romance. She loves to create stories that are emotional and lovely with sex that is integral to the characters' romantic arc. Her books include straight couples, curvy couples, gay, and multicultural couples. Love is love and everyone should have their story told.

Christa lives in Houston, Texas with her two dogs, and is a semi-retired member of Houston Roller Derby. She enjoys hearing from readers. For more on Christa's work, including deleted scenes, excerpts, and free reads, visit www.ChristaTomlinson.com

Q&A with the author

Today I’m very lucky to be interviewing Christa Tomlinson author of The Detective’s Pleasure. Hi Christa, thank you for agreeing to this interview. Tell us a little about yourself, your background, and your current book.

Hello! I’m originally from St. Louis, Missouri and I currently live in Houston, Texas. I have two dogs and I’m a retired roller derby player. My background for the romance industry is I’ve been reading romance novels since I was eleven! My big sister let me read hers as long as I promised to skip the “grown up” parts. I always said I would skip them but read them anyway. I was a rebel. My current book is The Detective’s Pleasure. It’s an erotic BDSM romance, featuring men from my fictional version of the Houston Police Department SWAT team. This story is about Officer Ryan Bennett a stubborn and snooty submissive, and Detective Sam Roberts the laid-back Dom who isn’t afraid to take Ryan on.
No, there weren’t any previous experiences that I used for this story. At least, none that I can think of. It all came from my head.
Patience. Something I’m still working on. You need patience to be able to make it through finishing one WIP before moving on and starting another. The ability to tell a story is obviously a very important skill to have. Writing a book is more than putting words on paper. You have to understand and know how to use themes, convey emotion, manage pacing and a dozen other things. Without that storytelling skill, a writer is doomed. And of course, a writer needs to know proper mechanics. They don’t have to be a high level editor and grammar teacher. But they need to have a good grasp on the basics so that the editor and/or beta readers don’t have to nearly rewrite a story for it to be comprehensible.
One who is flawed. I don’t like writing perfect heroes. If you look at my books, you’ll see that Gage from Bad Boys Need Love Too was an asshole, Logan from The Sergeant was a control freak in his relationship and Kevin from Bad Boys Need Love Too: Nate had poor self-confidence. Having heroes who are flawed gives both me and the reader a way to learn about him and watch as he fights and to discover who he is so he can earn his happy ending. I might get flak for some of the characters I write about, but I wouldn’t have them any other way.

Yes. Striking a balance between going over the top with drama and toning it down to the point where I lose my author voice. I think I found pretty good balance with that in The Detective’s Pleasure. I just let that story be as it needed to be. I didn’t add anything extra and I didn’t take anything out.

My favorite childhood book is Mrs. Mike. Partially because my grandmother gave it to me to read. And partially because I thought the woman’s story was so interesting. As a kid who grew up wearing pants whenever I wanted, I found it so weird that Mrs. Mike had such a feeling of both oddness and empowerment when she wore her first pair of pants. Plus, I had a book boyfriend crush on her husband, Sergeant Mike.  I thought it was a great story.

25-Feb
Wake Up Your Wild Side, KathyMac Reviews