CHOICE OF ENEMIES
Book 1 of A Nathan Monsarrat Thiller 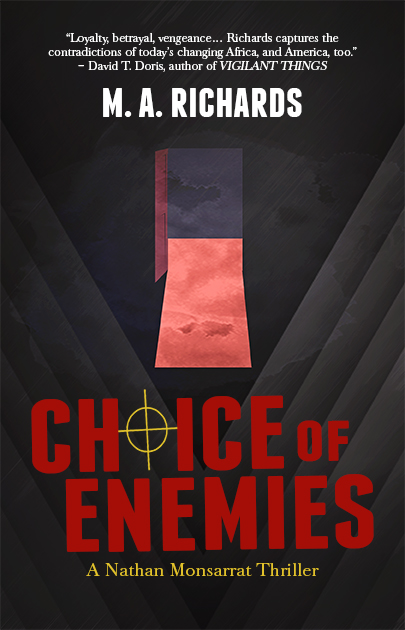 CHOICE OF ENEMIES is the first in a series of espionage novels featuring Nathan Monsarrat, a retired Central Intelligence Agency deep cover operative with an extensive knowledge of black gold and expertise in weapons, women, and Benjamins.

Light sweet crude is the mother’s milk of the Niger Delta.

As the price for each barrel of oil rises on the international markets and the stakes for securing the black gold increase, a consortium of American oil companies and the Central Intelligence Agency plot to secure the flow of the crude.

In Africa, though, plans unravel as quickly as cheap socks, and promises between partners have the lifespan of a mayfly.

Nathan, now a Dean at a small college in Massachusetts, is visited by his former mentor at the Agency, who offers him a blunt choice: either travel to the Dark Continent to lay the groundwork for the coup d'état, or condemn the woman who saved his life to a brutal execution.

Out of options, he returns to Africa, where he discovers that the Agency plans to reward his services with an oil soaked grave.

Assisted by a coterie of new and old allies, including a beautiful vor with a thirst for power and a yeshiva bocher with a fondness for Armani suits, as well as his own sharp intelligence, considerable wit, and substantial charm, Nathan parries the Agency, circumvents the consortium, and exacts his own vengeance.

IN THE COOL OF THE AFRICAN DAWN

In the cool of the African dawn, six armored Suburbans bulled through the sodden Delta jungle toward Bonny Island. In their wake, whirlwinds of red dirt billowed upward toward the crown canopy. Inside the vehicles, frigid air filtered the jungle stench of rot and decay. Felix Sanhedrin, a twenty-five-year veteran of covert operations in Africa and the Middle East, sat on the rear bench of the convoy’s second Suburban like Allan Quatermain returned to the Dark Continent. White linen slacks, a blue Oxford shirt, a silk ascot, and a freshly pressed, khaki bush jacket adorned his thin frame. A device more computer than chronometer rested on his left wrist. His felt slouch hat boasted a faux leopard-skin band, and his canvas jungle boots gleamed. A Glock 19 nested in a leather holster on his right hip.

Benjamin Franklins, and he carried with him, like a talisman, the blessings of the Mandarins who guided the operations of the Central Intelligence Agency in Langley, Virginia. Despite their stated policy to never negotiate with the enemies of the United States, Sanhedrin had convinced the éminences grises to ransom his assistant, Nathan Monsarrat, from the rebel group called Fighters Against Terror in Africa, or FATA.

“First rule: I’m in charge, and my word is law. Second rule: we take only Monsarrat with us. Final rule: my money’s bought your silence. Neither you nor your shooters nor your medics will speak of this mission to anyone. Never repeat, never. Capish, my new friend?”

Next to Sanhedrin, Mark Palmer wore funereal black, a shooter’s vest, tee shirt, tactical pants, jungle boots, baseball cap, Nomex gloves, and sunglasses. Years beneath the African sun had braised his face and arms. He was clean shaven, and his hair was cut in a brown bristle. Military tattoos covered both his forearms, and blue veins latticed his knotted muscles. He carried an M4 rifle, a brace of Heckler and Koch P30 pistols in nylon holsters strapped to his thighs, a combat knife, commo gear, and four P30 magazines looped onto his belt. The shooter’s vest held extra M4 mags.

He spoke with a soft, southern drawl. “Five by five, Mr. Scarnagh. No worries. We were never here.”

Sanhedrin had declared himself to Palmer by his work name, Fineghan Scarnagh. He operated under the letters F and S, keeping with the monograms on his shirt cuffs. Felix and Fineghan. Sanhedrin and Scarnagh. “You should call me Fineghan. After all, we’re in the same line of work.”

“What line of work would that be, if you don’t mind my asking?”

“I’m an independent oil consultant. I work with firms in Africa. Occasionally in Russia. Often in the Middle East.”

“Funny we haven’t met before, me being the chief of security for the biggest oil services company in Africa,” Palmer offered.

Sanhedrin prided himself on his light touch. “I’m a traveling oil gun for hire.”

Palmer smiled politely. “Have you worked with my company previously, Fineghan?”

Sanhedrin admitted that he had not experienced the pleasure. “What about you, Mark? How’d you get into the oil business?”

Palmer gestured toward the two men in the front of the Suburban. “We’re specialists—Frank, Joe, and me. We have skill sets that oil companies find attractive.”

“Former army?” Sanhedrin asked, although he had memorized the personal history of every man and woman in the convoy.

Shafts of golden sunlight as thin as reeds cast shadowed patterns on the hardscrabble road. Joe Marinelli drove the Suburban, while Frank Rollins navigated in the shotgun seat. They might have been clones of Palmer. They wore the same clothes and carried the same equipment, save each sported a mustache, closely trimmed beard, and hair plaited into a single braid, blonde for Rollins and brown for Marinelli.

“Afghanistan, Iraq, Yemen, Somalia, Eritrea, South Sudan,” Palmer replied. “You name it, if it’s in the sh*t, we fought there.”

“Rangers for Joe and me,” Rollins answered.

“Scrolls, not tabs,” Marinelli added. “Mark was a Special Forces light bird. Compared to him, Frank and me are cub scouts.”

Compliments bored Palmer. “Monsarrat also claimed to be an independent oil consultant. Like you, he worked in Africa, Russia, and the Middle East.”

“You know him?” Sanhedrin inquired.

“We met a few times in Abuja and Lagos. Port Harcourt, more often.”

Palmer recited his sums for Sanhedrin. “In my small world, people who claim to be independent oil consultants are usually CIA spooks. Not that I have anything against spooks, other than they can’t be trusted.”

“I’m sorry for your hard times,” Sanhedrin commiserated, “although I’m not your usual independent oil consultant.”

“Roger that,” Palmer agreed, “you carrying a Glock on your hip.”

“Your payment sailed through the bank.”

“Is it my couture that bothers you?”

Palmer had attempted to trace the background of Fineghan Scarnagh. His head hurt from banging it against the maze of brick walls he had encountered. “Truthfully, I smell Agency all over you.”

Sanhedrin brushed his fingertips across the holster. “My cologne upsets you?”

In the front of the Suburban, Rollins and Marinelli eyed the dirt road for threats while listening hard to the conversation. Each bore scars from prior Langley operations.

“In my experience,” Palmer continued, “when the Agency runs an operation, things usually turn south real fast, and the sh*t splatters everyone involved, save the boys and girls from Langley. So I’m only asking for confirmation.”

“Confirmation of what, exactly?”

“Me? An Agency spy? Perish the thought!” Sanhedrin protested.

Palmer’s distrust of the man next to him increased each time he uttered a sentence. “If you say so, Fineghan. What about Monsarrat?”

“I have no clue,” Sanhedrin deadpanned. “We’ve never met.”

In Palmer’s weltanschauung, the most dangerous spooks supplied the glibbest answers. “Yet, you’re here to ransom him from the rebels.”

“Like I said, Mark, I’m a traveling oil gun for hire. I take the sh*t jobs nobody else wants or can pull off.”

“In my own area of operations.”

Sanhedrin rubbed a smudge of dirt from the toe of his right boot against the driver’s seat. “Tell me about Monsarrat.”

“I wouldn’t say friends,” Palmer corrected. “More like professional associates. I was sorry to hear the rebels took him from the oil rig, but until you called my bosses, I had no brief to go after him.”

Sanhedrin appreciated men with military backgrounds. They accepted their roles without the sturm und drang civilians brought to operations. He prodded the conversation in a new direction. “How many shooters are you holding in reserve?”

“A half dozen with the Blackhawks, a few miles from our destination. If the balloon goes up, they’ll ride to our rescue like Valkyries with rotors.”

“Let’s hope none of us is headed for Valhalla,” Sanhedrin sniffed.

I adore this book! M. A. Richards is a first-time author, but I rank CHOICE OF ENEMIES with the best novels of Martin Cruz Smith and Daniel Silva. The novel is written with passion, excitement, and knowledge – Richards certainly knows the dirty world of government and espionage. His pacing is taut, and his language is a joy to read. His sense of location is superb; I smelled the stench of oil in the Delta and felt the heat of the desert in Namibia. Most importantly, Nathan Monsarrat is one of the most likeable heroes I’ve met. When the novel ended (I read it in 48 hours), I was sad that the adventure was over but thrilled I had discovered Nathan Monsarrat. Also, Nathan’s antagonist, Felix Sanhedrin, is a delicious villain, a manipulative, dishonest, and neurotic full-bodied character. The relationship between Nathan and Felix is subtly drawn by Richards and is one of the most enjoyable aspects of this excellent novel. I grant it five stars and recommend it 100%! By Y. H. Park on January 19, 2016 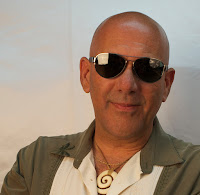 M. A. Richards is the author of the Nathan Monsarrat international espionage novels.

During a career as a Cultural Attaché in the Department of State that spanned more than two decades, he served in Baghdad, Jerusalem, Lagos, Moscow, Seoul, Tel Aviv, and Washington, D.C. He also served at U.S. Pacific Command in Honolulu as the Special Advisor to the Commander. He speaks Arabic, Hebrew, Korean, and Russian.

M. A. divides his time between Palm Beach and Tel Aviv, where he indulges his passions for motorcycles, photography, and archaeology.