Pre-Order-Excerpt & Giveaway: SHADES OF DESIRE 2-SEXIER BY THE DOZEN

Sexier by the Dozen.
Twelve titillating tales for naughtier nights and dreamier days. Get swept away by USA Today, bestselling, and award-winning authors in this set of sweet and spicy romances that will leave you breathless with desire... 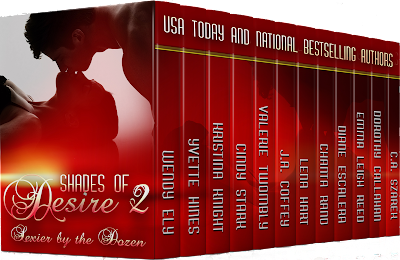 Sports reporter Grace Avery is up for a promotion, but only if she gets an interview with the notoriously private, heavy weight champion, Rally Brewer. Grace discovers who Rally is beyond the boxing ring.  Little does anyone know, as Grace gets Rally to open up, a two-year-old secret is in jeopardy. Is revealing his secret worth gaining Grace’s love?

Ace never planned that one crash could bring him the woman of his dreams. Just when love has found Jaide, her career could be in jeopardy. Can they handle the pressure and battle coming their way or will it end it all?

Getting down and dirty in a limo with rocker Nate Lansford seems like the perfect solution to Lily MacIntyre's too-sweet image problem, but Nate doesn't do anything half-way and what he wants from Lily might be more than she bargained for...

When Krystal left her first love to pursue a career, she never dreamed she’d find herself back in the same small town working with the one man she’d thought she could forget.

When Crone is asked to protect Tessa from an evil warlock, the jinn is eager to accept, hoping to right a wrong from his past.  But having the beautiful witch on his secluded island creates a supernatural brew perfect for sultry nights.

When gutsy Allison Dare inherits a destructive dog from a dearly-departed cousin, can the hunky amputee dog trainer she hires also tame her rebellious heart?

Mya wants to win back her old sweetheart—the one she walked out on years before—but Guy isn’t the forgiving type. And he doesn’t believe in second chances. Will their bond be enough to save their love or is it already too late for them?

Action star, Lucas Stone isn’t afraid of anything—except commitment. When he butts heads with photographer, Nyla Maxwell, he thinks he may have finally found his real-life leading lady. Too bad she can’t stand his guts.

Last thing Nico needs is a broken arm. Worse, now his pal’s kid sister wants to soothe his pain. It’s just like Kayla to play the seductive nurse. She’s always had a thing for Nico. Problem is, Kayla’s not a girl anymore. She’s one hot-blooded woman. And Nico’s body is heating up.

Mourning his wife’s death and her running from a bad marriage with many bad decisions, Dan and Kelli are thrown together. When their compassion for each others’ sorrows brings a new level of passion to the game, there is finally A Time to Heal.

To Catch A Star – Dorothy Callahan*

Hollywood’s hottest action hero finds himself rescued by the very woman whose livelihood he’s about to destroy.

Claire gets sucked into 1672, naked and scared. Duncan rescues her only to realize she’s the key to finding his brother who was kidnapped by the Fae. Can they work together and both get what they want? Will sudden passion for each other change their goals? 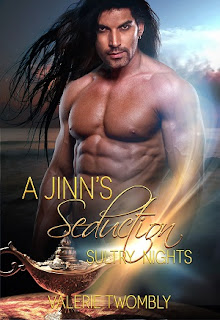 Excerpt from Sultry Nights
Crone spun her to face him.
“Either you fill this closet or I send you packing, and you can fend for yourself.”
“Why is this so important to you?” Double sh*t! “It’s only clothes for crying out loud.” She was screwed either way because if she tried her magic and got her usual results, he would likely toss her out anyway. If she refused, she faced the same fate.
“It just is, so I suggest you start singing your chants and rubbing your charms, or whatever it is you witches do.”
She wanted to be pissed. Oh hell, she was pissed, but he now had her backed into a literal corner with no place to run. She took in a deep breath to calm her nerves, but the opposite happened. His leather scent only boosted her sexual desire. Pull your sh*t together, Tessa. It’s only a damn closet full of clothes. She closed her eyes, searched for the words, and ran them through her mind. Magic circled her and caused her skin to prickle. Something’s happening. She cracked open one eye, afraid to see what she’d done but was pleasantly surprised.
“There. Happy now?” She placed her hands on her hips in satisfaction.
Crone looked into the closet and back at her. A brow lifted. “You call that pittance a closet full?”
“I don’t need much. Besides, I hate to waste,” she retorted, so done with this whole mess.
He cocked his head. “One pair of jeans and ten yellow tank tops is your idea of clothing?”
She lifted her chin. “Flip flops. Did you not notice the flip flops?”
He crossed his arms, biceps bulging, and leaned back on his heels. “Unless fashion has taken a drastic change, one still needs a matching pair which is not what you have.” His mouth curled in amusement.
She did a double take and looked down at the lone pair of sandals. One was bright pink with a silk flower on top and the other pale blue and made of terry. It was a damn bedroom slipper. “Sh*t.” She muttered and Crone’s amusement turned to full-blown laughter.
“I don’t need shoes anyway. After all, this is a beach,” she laced her voice with all the sarcasm she could muster.
His laughter died as quickly as it started, and he leveled his gaze. “Why don’t you tell me the truth. You don’t have a handle on your magic.”
“Don’t be absurd.” Before she could react, he had her caged to the wall and unable to move. If he stood any closer, they would touch in the most intimate way. She slammed her palms on his chest and shoved.
Nothing.
“You want me to move? You’ll have to make me. I may be physically stronger than you, but you’re a witch. You must have something in that bag of tricks of yours.”
Tessa’s face heated, and she commanded a jolt of energy to her fingertips. When nothing happened, she panicked. Her heart raced faster when she was greeted by a mooing sound, and Crone’s eyes widened. He released her and spun to face the disturbance.
She pushed up on her tiptoes and peered over his shoulder. “Oh, hell.”
He craned his neck to look back at her. “Really? That’s it? Oh, hell?”
“Sorry?” She gave a weak smile.
“There’s a f*cking cow in the middle of the bedroom!” He walked toward the creature; words she didn’t understand poured from his mouth, but she was pretty sure she was better off clueless. Suddenly the cow raised its tail and let loose a steaming pile. Tessa covered her mouth and nose, but it failed to help.
“I’m more sorry than you know,” she mumbled through her hand.


Crone simply flicked his wrist and both the cow and its offending gift were gone. He pointed toward the door. “Go plant your ass in a chair, and this time if you insist on lying to me like a damn child then I will treat you like one.” A devilish grin plastered his face. “I will put you across my knee and paddle your ass like my father used to do to me when I created havoc.”

Giveaway
Enter to win a signed copy of Spanish Nights (A Jinn's Seduction #1)
(US only for shipping, International prize is a $5 Amazon Giftcard)