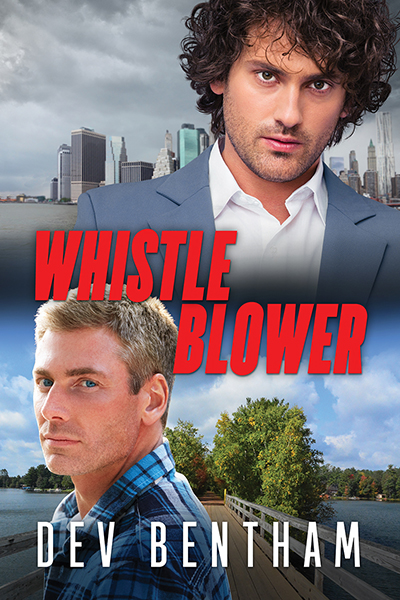 Money can’t buy happiness. Jacob Nussbaum knows this better than anyone. He's a corporate lawyer deep inside a huge New York firm, where he works overtime, sacrifices any chance at a personal life, and has been selling his soul for years. With a secretary as his only friend, he trudges on, until his whole world is blown apart by a manila envelope of photos—evidence that one of the firm’s partners is the dirtiest lawyer in one hell of a filthy business.

In search of the truth, Jacob travels to a small northern Wisconsin fishing resort. There he meets Ben Anderson, a brutally lonely man, who knocks him off his feet. Ben prompts Jacob to reevaluate his life. He’s a dozen years older than Jacob, still recovering from the death of his long time love, and doesn’t want to leave anyone a widower. But a jaded New Yorker on a soul-searching mission might be just the man to convince the grieving Ben that it's never too late to begin again.
Goodreads Link
Publisher: Dreamspinner Press
Cover Artist: Catt Ford
Pages or Words: 214 pages
Categories: Contemporary, M/M Romance, Romance 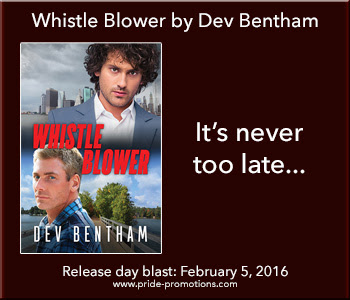 Ben got waylaid by a bunch of little things, so it took him longer than he’d expected to get back to the dock for Nussbaum’s—Jacob’s rowing lesson. As Ben approached the dock, Jacob was facing away, staring out over the lake. Which was good, since he was naked except for a skim of bright red Lycra that barely covered his ass. And what an ass. What a body in general. It had been a long time since Ben had seen a muscular olive-skinned back on which dark hair grew in such fascinating patterns. Manny had a back like that. Ben had loved to run his tongue along the thin lines of fur along his lower back. Manny hadn’t been hairy, really, just never quite naked. Jacob had that same look, except he was younger, stronger, and better built.

Feeling uncomfortable with that comparison, Ben tore his eyes away from Jacob’s body. Aside from leaving him feeling unfaithful to Manny’s memory, this was neither the time nor the place and, in all probability, not the man to indulge that kind of fantasy. Ben cleared his throat, and Jacob turned around. Jesus. Who’d have thought under all those clothes, there’d be this—high definition, perfect tone, and all that gorgeous skin. Ben forced himself to meet Jacob’s eyes. He reached into the boathouse, pulled out one of the clean tee shirts he kept for changing after rowing, and handed it to Jacob.

“It’s easy to get sunburned out here.” For the love of God, he had to cover up the guy if he was going to teach him anything, other than…. He cleared his throat again. “The beginner scull is up here.” He walked back up the dock to the boat rack, yelling at himself the whole way for unprofessional thoughts.

As Ben uncovered the practice scull, he was hit by an unexpected wave of memory. Manny had bought it for him their first summer in the Northwoods. It had taken Ben two years to outgrow the added stability and another to decide to try Manny’s MAAS. He ran a finger over the fiberglass patch from when he’d run the boat into the shore. Manny, from his own scull twenty feet away, had admonished, “Never get in a fight with a rock. The rock always wins.”

From behind him, Jacob asked, “Need any help?”

Ben straightened and walked to the far side of the boat. “Get the stern, would you?”

Jacob picked up his side of the boat, and in a monkey-see-monkey-do motion, lifted it onto his shoulder. Ben turned around, settling the bow onto his left shoulder, and led the way back down to the dock. On three they flipped the scull into the water. Ben squatted beside the boat, pointing and describing the various parts until he felt comfortable enough in his role as teacher that he could glance over at Jacob, who knelt beside him. Jacob was focused on the boat, taking in Ben’s instructions. Ben exhaled. Jacob covered up and concentrating on the boat was easier to deal with than he was as a just-about-naked man basking in the sun at the end of the dock.

Ben noticed Jacob’s shoes for the first time. No shorts, no water shoes. Evidently Mr. Nussbaum had been expecting an entirely different resort vacation, probably involving mai tais on the beach and plenty of bikini-clad young women. If he tipped over in the scull, which he was going to do, everyone did when they were starting out, those shoes would take a long time to dry. Ben had an extra pair of water shoes. Maybe they’d fit.

“What size feet do you have?” he asked.

Jacob glanced up. “Ten. Why? Does it matter for the stirrups?”

Of course he wore tens, because otherwise the physical comparison wouldn’t be perfect. “Your shoes will be awkward as hell in the stirrups. You need something lighter and better in the water. Don’t worry. I’ve got some you can borrow.”

Jacob wouldn’t fit in Ben’s nine and a halfs, but Manny’s old tens were still where they’d always been, on the top shelf in the boathouse. Ben found them. He brushed off the dust and cobwebs. The shoes weren’t sacred, and it wasn’t disloyal to let Jacob wear them. They were just old water shoes with cracks in the soles. Ben grabbed a pair of oars and stepped back onto the dock, dropping the shoes by Jacob. “Try these. I’ll get the oars set up.”

Ben fixed each oar in its oarlock, concentrating hard so he wouldn’t have to watch another man put on Manny’s shoes. Then he set about teaching Jacob Nussbaum the rudiments of rowing.

Whistle Blower was an excellent read, sweet while at the same time a little sad but also with some heat.  The part of the storyline where the title comes from-with Jacob trying to uncover information about a shady lawyer in his firm-actually felt secondary to the part about the relationship that develops between Jacob and Ben.  I was actually okay with this, as it gave a reason for them to meet and continue to see each other while putting the two of them front and center in the story.

Both Ben and Jacob are fantastic characters.  They have depth and are quite likable, and even though there is a bit of an age difference they fit very well together.  It did bug me a little bit how Ben kept wanting to brush Jacob off because of that age difference, but other than that I loved everything about the two of them.

I was surprised at the emotion the story evoked from me toward the end, and I have to say that overall this was a truly enjoyable read.  The story flowed quite well and I found that by the end I really cared about both Ben and Jacob.

I've always found most serious M/M romance stories to be much more emotional than M/F romances, usually because of the nature of most M/M relationships--like one being closeted, unaccepting family and so on--but here in Whistle Blower you get an emotional story not just because of the characters, but because of the story itself.

4.5 wonderful stars for Whistle Blower, and I'd definitely recommend this for M/M romance fans.  This one is for the 18+ group due to adult language and sexual content.  I'm looking forward to reading more by this author! 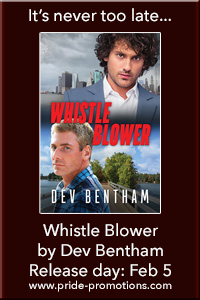 Meet the author:
Dev Bentham writes soulful m/m romance. Her characters are flawed and damaged adult men who may not even know what they are missing, but whose lives are transformed by true love.

GIVEAWAY!
A signed paperback copy of Nobody’s Home OR an ebook, reader’s choice, from Dev’s backlist which can be found at www.devbentham.com